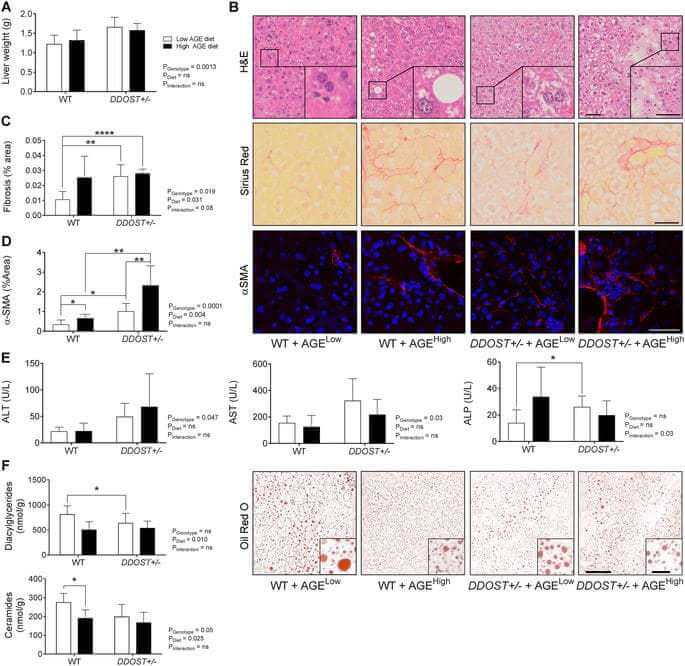 The protein oligosaccharyltransferase-48 (OST48) is integral to protein N-glycosylation in the endoplasmic reticulum (ER) but is also postulated to act as a membrane localised clearance receptor for advanced glycation end-products (AGE). Hepatic ER stress and AGE accumulation are each implicated in liver injury. Hence the objective of this study was to increase the expression of OST48 and examine the effects on hepatic function and structure. Groups of 8 week old male mice (n = 10–12/group) over-expressing the gene for OST48, dolichyl-diphosphooligosaccharide-protein glycosyltransferase (DDOST+/−), were followed for 24 weeks, while randomised to diets either low or high in AGE content. By week 24 of the study, either increasing OST48 expression or consumption of high AGE diet impaired liver function and modestly increased hepatic fibrosis, but their combination significantly exacerbated liver injury in the absence of steatosis. DDOST+/− mice had increased both portal delivery and accumulation of hepatic AGEs leading to central adiposity, insulin secretory defects, shifted fuel usage to fatty and ketoacids, as well as hepatic glycogen accumulation causing hepatomegaly along with hepatic ER and oxidative stress. This study revealed a novel role of the OST48 and AGE axis in hepatic injury through ER stress, changes in fuel utilisation and glucose intolerance.

Chronic liver disease is increasing globally as a result of obesity and diabetes, with non-alcoholic fatty liver disease (NAFLD), the most common liver disorder1. However, NAFLD is asymptomatic and most individuals do not progress to non-alcoholic steatohepatitis (NASH). The development of NASH is postulated to be the result of a ‘second hit’ environmental factor2.

Glucose intolerance and dyslipidaemia which are often characteristic of NAFLD3, facilitate the non-enzymatic post-translational modification of proteins, forming advanced glycation end products (AGEs)4, which accumulate in tissues and contribute to liver fibrogenesis4. Excessive exposure to exogenous sources of AGEs, such as from food, can also exacerbate liver injury in the absence of glucose intolerance5. This is likely via simple diffusion through the epithelium if cleaved6, although AGE specific receptors may facilitate receptor-mediated gastro-intestinal trafficking. Once absorbed, AGEs are directed to the liver through the portal vein and excreted via the gall bladder by hepatic sinusoidal Kupffer and endothelial cells7, and by renal clearance8.

The liver, however, is not only a site for the clearance of AGEs, but also a target organ and expresses various AGE receptors including the receptor for advanced glycation end-products (RAGE)9, advanced glycation end product-receptor 1 (OST48 also known as AGE-R1)10 and galectin-3 (AGE-R3)11. There is accumulating evidence which suggests that in NAFLD, AGEs are a ‘second hit’ that triggers progression from steatosis to NASH12. Galectin-3 (AGE-R3) has also been associated with inflammation and liver fibrosis11 and a Phase 2a multi-centre trial is underway in individuals with portal hypertension and NASH cirrhosis (NCT02462967), using galectin-3 inhibitors. Although the studies to date in galectin-3 have focused on its immunomodulatory roles, it is feasible that AGE binding and signalling via galectin-3 is also prevented by galectin-3 inhibition contributing to the efficacy of these agents in preventing liver pathology.

The effects of AGEs are mediated by their receptors, which the effects can be broadly contrasting depending on the type of receptor. For example RAGE facilitates oxidative stress, cell growth and inflammation13. Specifically, in chronic liver injury, hepatic expression of RAGE is significantly increased14 and several studies in acute liver injury have identified that blockade of RAGE can ameliorate toxic, ischemic and cholestatic liver damage15. Alternatively, another AGE receptor, OST48, is thought to be responsible for the detoxification and clearance of AGEs and negative regulation of AGE pro-inflammatory signalling16,17, and cellular oxidative stress18. A decline in the expression of OST48 associated with increases in AGEs has been demonstrated both in murine models19 and in individuals with diabetes17. Although OST48 is postulated as an AGE clearance…