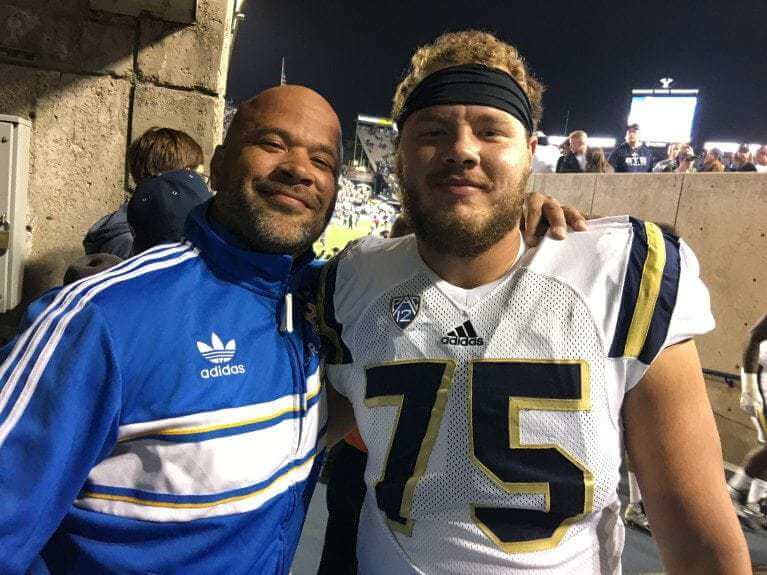 LOS ANGELES >> Something wasn’t right about Andre James. The usual joy in his gray eyes was gone, clouded by worry as he floated through walk-throughs during a training camp practice last month.

His body lined up at right tackle in the shadow of UCLA’s new Wasserman Football Center, but his mind was in a hospital room in Utah where Marcus James had agonized how exactly he would tell his son.

It’s one thing to be told you have cancer. It’s another to tell your family you have it.

“It’s the hardest thing I’ve ever gone through,” Marcus said of making the phone call to his son just minutes before Andre walked onto the field for a training camp practice in mid-August.

The news didn’t sink in until that night when Andre tossed and turned in his bed in the Luskin Conference Center. The redshirt sophomore couldn’t sleep. He thought about his dad passing away from the aggressive form of testicular cancer that already spread to parts of his brain. Then he remembered who the disease was dealing with.

Marcus couldn’t lift the front of his right foot, so the healthy Crossfit gym owner went to get it checked out. It was probably nothing, he thought.

Two days after he walked into the hospital, his whole right side was paralyzed. One of four tumors in his brain was pushing on the nerves controlling his motor skills, robbing him of the ability to walk.

He was quickly admitted to surgery once doctors discovered the cancer. He’s gone through three rounds of chemotherapy since his diagnosis in August and has two more five-day rounds to go. He starts his fourth Saturday, the same day the Bruins host Colorado at 7:30 p.m., and he’s confident he’ll make a full recovery after chemotherapy and radiation.

Andre desperately wants to be with his dad, but is limited to daily FaceTime sessions. While Marcus fights in Utah, he wants his son to fight for the Bruins in Westwood.

“He’s got responsibilities that he’s got to deal with and I’m going to be fine,” Marcus said. “This is just going to be something in our past that we’ll look back on as something we got through.”

Through their daily conversations, Andre watched his dad waste away during…