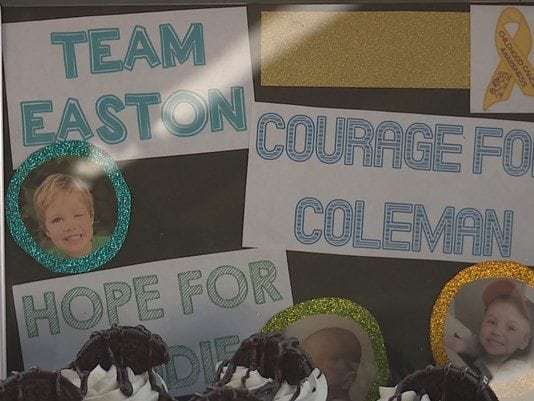 MERIDIAN — Three local families – all connected by a horrible, unthinkable diagnosis – are teaming up for Childhood Cancer Awareness Month.

Coleman, Addie and Easton were all diagnosed with cancer in the last year and on Saturday, their parents hosted an event to raise money for pediatric cancer research and celebrate their brave little fighters.

These three families have a special bond now – able to lift each other up and relate to their hardships during this past year. Saturday’s barbecue and bake sale was not only to bring awareness to the fact that kids get cancer, too, but it was also a celebration.

“It’s bittersweet. You think you’d be super excited and we’re done, but it’s just a going back and forth between being worried and not being worried and just enjoying each moment. So that’s what we’re going to be doing: we’re just going to be making memories and trying not to focus on the scans every three months and the likelihood that it can come back,” Addie’s mom, Kristee Abernathey, said.

Diagnosed on Christmas Eve last year with a very rare, aggressive form of cancer, it’s been a long haul.

“She’s been doing a total of 40 weeks of chemotherapy and then radiation in Seattle – 29 treatments of that over like an eight week period,” Kristee added.

“She’s a real sassy spirit and has continued to be that way throughout,” Kristee said. “She just dances her way through it. She’s just been a real inspiration to us.”

It’s been exactly one year since Easton Brown was diagnosed with the same type of rare cancer as Addie.

“His is orbital rabdomyosarcoma, which is a very uncommon cancer we’re told,” Easton’s mom, Paige Brown, said, “and it was very interesting when we found out about Addie who was diagnosed just a few months after Easton.”

“He has an amazing spirit and through the whole process has just been a happy kid and rolls with the punches. He just does what needs to be done,” Paige said. “I think one of the good things about having it happen so young is that he just either feels good or he doesn’t feel good. And he doesn’t understand the extreme nature of what he’s going through.”

And then there’s Coleman, or Cole, Ross, who has also been fighting for his life as well, diagnosed with high-risk neuroblastoma in December of last year.

“He’s had a lot of therapy since…