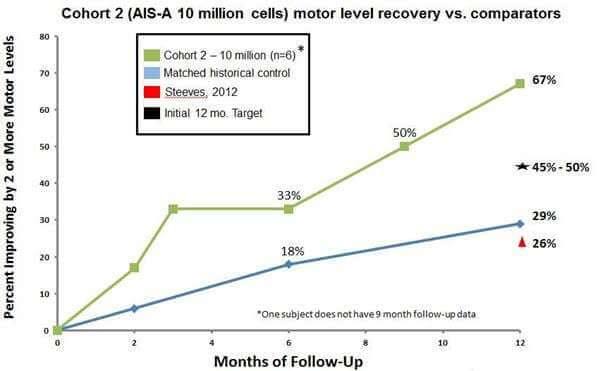 FREMONT, Calif., Oct. 02, 2017 (GLOBE NEWSWIRE) — Asterias Biotherapeutics, Inc. (NYSE American:AST), a biotechnology company pioneering the field of regenerative medicine, today announced new 12-month data from the first efficacy cohort in the company’s ongoing Phase 1/2a SCiStar study designated to evaluate safety and efficacy of AST-OPC1. The 12-month data showed 67% (4/6) of Cohort 2 (AIS-A injuries administered 10 million AST-OPC1 cells) subjects have recovered 2 or more motor levels on at least one side through 12 months, which is more than double the rates of recovery seen in both matched historical controls and published data in a similar population. Also, the FDA granted the company’s request for AST-OPC1 to be designated a Regenerative Medicine Advanced Therapy (RMAT) under the 21st Century Cures Act.

A photo accompanying this announcement is available at ://www.globenewswire.com/NewsRoom/AttachmentNg/5f3b3123-31c5-48ec-be59-dd0b842a21ca

“The 12-month results suggest that many of the Cohort 2 subjects are seeing a durable clinical benefit above and beyond what you would expect to see from spontaneous recovery following a severe spinal cord injury,” stated Dr. Edward Wirth III, Chief Medical Officer. “Our target for the entire SCiStar study since its commencement was that at 12 months 45-50% of study subjects would recover at least 2 motor levels on at least one side, and it is exciting that Cohort 2 has exceeded this target recovery rate.”

“We are very encouraged by these early results and look forward to continuing to pursue this important program,” stated Mike Mulroy, President and Chief Executive Officer. “We are also excited about the RMAT designation and I’d like to commend our clinical operations team on these developments and our entire employee base on several other recent positive developments at Asterias:

Improvements in upper extremity motor function are being measured using the International Standards for Neurological Classification of Spinal Cord Injury (ISNCSCI) scale, widely used to quantify functional status of patients with spinal cord injuries. Both subjects and physicians consistently report that improvements in upper extremity motor function are the most desirable functional improvement target in the quadriplegic population, since even relatively modest changes can potentially have a significant impact on functional independence, quality of life and cost of care. The SCiStar study is monitoring two separate ISNCSCI measurements of upper extremity motor function. The upper extremity motor score (UEMS), is a linear scale used to quantify motor function at each of five upper extremity muscle groups driving arm and hand function; these scores are also used to determine “motor levels”, which define the level within the cord above which a subject has normal function. As suggested by existing research, patients with severe spinal cord injuries that show two motor levels of improvement on at least one side may regain the ability to perform daily activities such as feeding, dressing and bathing, which significantly reduces the overall level of daily assistance needed for the patient and associated healthcare costs.

A total of six subjects were enrolled and dosed in Cohort 2, with all six subjects completing a 12-month follow-up visit. The results include the following highlights: