Hobbled Stafford hopes to get Lions back on track vs. Saints 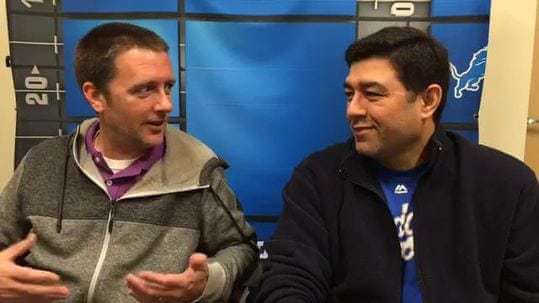 Playing through pain is nothing new for Matthew Stafford.

One of the signature moments of Stafford’s career came in 2009, when he threw the game-winning touchdown pass in a win over the Cleveland Browns with a separated non-throwing shoulder.

Since then, the Lions quarterback has played through broken and dislocated fingers, bruised (at least) ribs, and an assortment of other minor bumps and bruises.

Often, he’s played well under the circumstances. Sometimes, he has not.

Last year, the Lions lost their final three games of the regular season as Stafford played through a dislocated middle finger on his throwing hand. He threw five interceptions in 15 quarters with the injury, the same number he threw in 12-plus games without it.

In 2011, Stafford threw nine interceptions in a three-game span while playing with a broken finger on the same hand. He suffered that injury seven days after leaving Ford Field in a walking boot with a sprained ankle and injured knee.

As he gets ready to make his 102nd consecutive start Sunday against the New Orleans Saints, the fourth longest streak among quarterbacks in the NFL, Stafford is once again dealing with an ankle injury that could hamper him on the field.

It’s not nearly as limiting as the finger injuries he survived on his throwing hand, but it will be something to monitor as the Lions try for their fourth win of the year against a Saints defense that’s much improved from the ones Stafford has shredded in recent seasons.

“Before I arrived, I remember visually just watching him play in a couple ball games where he had things that he had to battle his way through and you knew he was a tough, hard-nosed guy,” Lions coach Jim Caldwell said. “He has a lot of great traits, that’s one of them. I mean, he really is a little different in that regard, and I think that benefits him.”

Stafford’s toughness is commendable, even if it’s not altogether unique among the upper echelon of NFL quarterbacks.

Eli Manning, the NFL’s ironman at the quarterback…