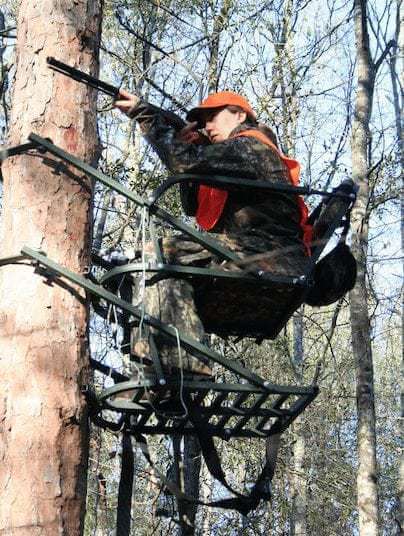 It’s that time of year again where millions of men (88.1 percent) and women (11.9 percent), begin to disappear and venture into the woods to hunt the all elusive whitetail deer.

Deer season in Kentucky opened for bow hunters this past Sept. 2 and muzzle-loading season is scheduled to begin this coming weekend, Oct. 21-22.

It’s been estimated that there are 16.5 million active hunters across the United States, and according to a Realtree.com statistic, 10.9 million of them went into the field to hunt deer, spending on average 15.5 days per hunter.

When you add the number of hunters in Texas, Pennsylvania, Michigan and Wisconsin you have over 3,510,000 hunters, which equates to the largest army in the world.

Hunters don’t hesitate to open up their wallets when it comes to gearing up for the love of this sport either, spending on average $1,992 annually per hunter, which equates to a $24.9 billion industry in the United States.

In the early 20th century the Kentucky deer population was believed to number only 2,600, and with the help of Kentucky’s Wildlife management and deer hunters, the herd has grown to an estimate of 858,000.

Last year in Kentucky there were a total of 139,429 deer harvested during the 2016-17 season with a total of 514,000 numbers of resident hunting licenses, tags, permits and stamps purchased in the state.

I have spent my fair share of time in the woods in October and November over the years and with that many deer hunters, opening day of gun season does sound like a war zone. But the question that this safety and risk management professional intended to answer for you is “How Dangerous is this American Past Time?”

Statistically hunting is an extremely safe activity. According to the National Safety Council, far more people per 100,000 participants are injured while bicycling or playing baseball than while hunting. Further statistics show that while around 100 people die nationwide while hunting each year, more than 1,500 perish in swimming-related accidents.

Yes, hunters are sometimes mistaken for wildlife and are accidentally shot, but they also are exposed to hypothermia, poison Ivy, poisonous snakes, bear attacks, West Nile Virus, Lyme disease from tick bites and even the potential heart attacks from over exertion.

When you hear of the term “hunting accident” the first thing that probably comes to mind is an accidental shooting, and according to the International Hunter Education Association approximately 1,000 people in the U.S. and Canada are accidentally shot by hunters every year. Just under a hundred of those accidents are fatalities. Most victims are hunters, but non-hunters are also sometimes killed or injured but only 10 percent of these hunting accidents end in death.

The fact is that an accident involving a firearm is not the leading cause for injuries or fatalities. To most non-hunter’s surprise the most common type of hunting accidents are falls from tree stand while hunting. If you are a deer hunter you probably knew this, especially if you have any form of acrophobia, the fear of heights.

According to TreeStandSafetyAwareness.org, deer stand accidents are the number one cause of serious injury and death to deer hunters. Deer stands are elevated platforms used for hunting large game. They provide an expanded field of vision while minimizing ground scent.

It is estimated that more than one-third of hunters who use deer stands will be involved in a fall sometime in their hunting careers. Approximately at 300-500 hunters are killed annually in deer stand accidents and another 6,000 more sustain deer stand accident injuries, according to a study by the International Hunter Education Association (IHEA).

According to the National Bowhunter Education Foundation, more than 90 percent of hunters use some type of deer stand for hunting. Although deer stands were initially more popular with bow hunters, many rifle hunters are now use them as well. The Center for Disease Control found that the average deer stand was placed 16 feet above the ground, some hunters will go as high as 35-40 feet.

In most cases, victims from falls walked away with just a few scratches, bruises, strained ligaments or broken fingernails, however others will suffer permanent injuries that eventually cost them their jobs, businesses, marriages and/or mobility.

As a safety and risk management professional I can tell you that there is no specific distance from which a person can fall and survive. I have investigated fatalities from slip and falls from the same level. There are simply too many variables that will dominate the factor of distance. The truth is if you fall 16 feet, it’s going to hurt and it very well could be fatal depending on how you…