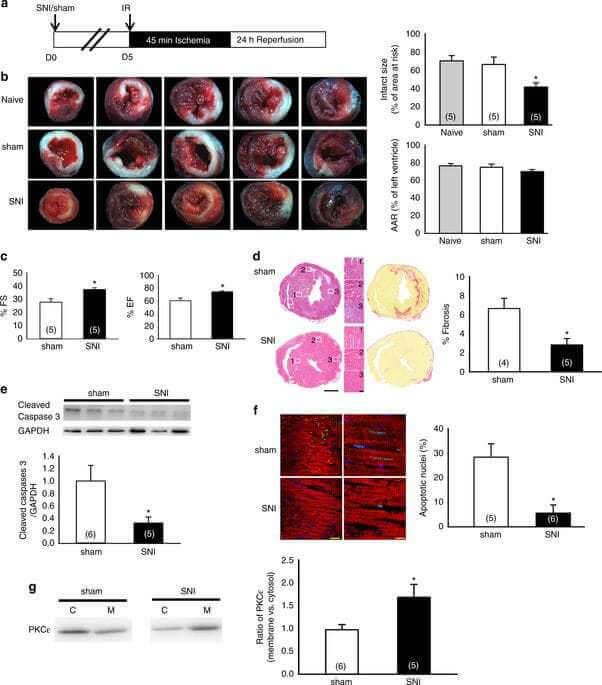 Myocardial infarction is the leading cause of death worldwide. Restoration of blood flow rescues myocardium but also causes ischemia-reperfusion injury. Here, we show that in a mouse model of chronic neuropathic pain, ischemia-reperfusion injury following myocardial infarction is reduced, and this cardioprotection is induced via an anterior nucleus of paraventricular thalamus (PVA)-dependent parasympathetic pathway. Pharmacological inhibition of extracellular signal-regulated kinase activation in the PVA abolishes neuropathic pain-induced cardioprotection, whereas activation of PVA neurons pharmacologically, or optogenetic stimulation, is sufficient to induce cardioprotection. Furthermore, neuropathic injury and optogenetic stimulation of PVA neurons reduce the heart rate. These results suggest that the parasympathetic nerve is responsible for this unexpected cardioprotective effect of chronic neuropathic pain in mice.

Ischemic heart disease or myocardial ischemia is the leading cause of death worldwide and often responsible for sudden death1. The principle intervention is timely thrombolysis or primary coronary angioplasty to restore blood supply into the occluded myocardium. However, reperfusion can also damage cardiomyocytes due to calcium overload, free radical production, and inflammatory cell infiltration. This phenomenon is called ischemia-reperfusion (IR) injury2. It is possible to make the heart more resistant to IR injury by pre-exposing the heart to several cycles of short coronary occlusion-reperfusion before the global ischemia, a procedure called ischemic preconditioning (IPC)3. Preconditioning of brief IR episodes can also be applied in distant tissues or organs to protect heart from IR injury which is called remote IPC (RIPC)4,5,6.

In this study, we aim to determine whether chronic pain can limit IR injury. Using spared nerve injury (SNI) neuropathic pain model, we showed that SNI but not sham operation reduced the infarct size after IR injury in mice. We also showed that the extracellular signal-regulated kinase (ERK) activity and neuronal activity in the anterior nucleus of the paraventricular thalamus (PVA), a brain region located at the rostral portion of paraventricular thalamus (PVT), is required for the SNI-induced cardioprotection. In addition, direct activation of PVA neuron using pharmacological or optogenetic tools without peripheral injury also provided cardioprotection. Activity of the autonomic nervous system is important in the RIPC25,26,27, we treated mice with autonomic nerve blockers and showed that parasympathetic but not sympathetic blocker abolished the SNI-induced cardioprotection. Overall, our results demonstrate that chronic pain induces cardioprotection via a central mechanism involving activation of PVA neurons.

To investigate whether chronic pain provides cardioprotection, we induced myocardial IR injury in mice 5 days after SNI (Fig. 1a). Left anterior descending coronary artery (LAD) was occluded for 45 min and reperfused for 24 h before examining the degree of myocardium damage. The results from triphenyltetrazolium chloride (TTC) staining clearly exhibited a reduced myocardial infarction (indicated by the pale color region in the transverse section of hearts) in the SNI compared to those in the naïve and sham groups (Fig. 1b). Quantification of TTC staining showed a significant reduction in infarct size in the SNI chronic neuropathic pain group (41.4 ± 4.7%, n = 5) compared to naïve (70.1 ± 5.8%, n = 5) or sham (66.2 ± 8.1%, n = 5) groups. To ensure the difference in the infarct size is not caused by different myocardium injury, we measured the area at risk (AAR) and found there is no difference among these three groups. To examine whether SNI surgery could alter hemodynamic change, we conduced blood pressure and echocardiographic measurement 5 days after SNI or sham surgery. There is no significant difference on the blood pressure between sham and SNI animals 5 days after surgery. The systolic pressure of sham and SNI animals before surgery were 107.2 ± 1.7 (n = 5) and 109.5 ± 2.7 mmHg (n = 5), respectively. The systolic pressure of sham and SNI animals 5 days after surgery were 108.2 ± 2.7 (n = 5) and 115.1 ± 1.9 mmHg (n = 5), respectively (Supplementary Fig. 1). There is also no significant difference on the parameters measured by echocardiography between sham and SNI groups 5 days after surgery (Supplementary Fig. 2). These results suggest that SNI-induced cardioprotection is not mediated by hemodynamic alteration induced by SNI or sham surgery. We also measured the serum level of creatine kinase muscle and brain isoenzyme (CKMB) as a cardiac injury marker 24 h after IR injury. CKMB levels were significantly lower in the SNI compared to sham groups, which indicates less cardiac injury in SNI group (Supplementary Fig. 3). Four weeks after IR injury, ejection fraction and fraction shorting measured by echocardiography were significantly higher in SNI compared to sham group (Fig. 1c). Histological examination of the cardiac transverse section 4 weeks after IR injury also showed reduced fibrosis and preserved left ventricular free wall in SNI compared to sham groups (Fig. 1d). Cardiomyocytes apoptosis leads to cell death in IR injury28. Therefore, we examined apoptosis at AAR after IR injury by terminal deoxynucleotidyl transferase-mediated dUTP nick end-labeling (TUNEL) assay and detection of cleaved caspase 3. The amount of cleaved caspase 3 was significantly reduced in the SNI group (Fig. 1e). TUNEL assay also showed a significant reduction in cell apoptosis in SNI (5.6 ± 3.3%, n = 6) compared to the sham group (28.4 ± 5.4%, n = 5) (Fig. 1f). TUNEL-positive cells were co-localized with α-actinin-positive cells, indicating apoptotic cardiomyocytes after IR injury (Fig. 1f). One of the downstream effectors in remote cardioprotection is activation of PKCε; once activated, PKCε is translocated from cytosol to membrane fraction29. We analyzed PKCε translocation in hearts isolated from mice with neuropathic pain and the results showed the amount of PKCε increased in membrane fraction in SNI group compared to the sham group (Fig. 1g). These results suggest a remote cardioprotective effect can be induced by SNI-induced chronic neuropathic pain model in mice.

We next asked whether maintenance of chronic pain is required to induce cardioprotection. To answer this, we infused lidocaine (15 mg/kg), a local anesthetic, intrathecally 5 days after SNI (Fig. 2a). Intrathecal infusion of lidocaine has been shown to relieve hyperalgesia in a rat model of chronic neuropathic pain30. Mechanical behavior test indicated intrathecal injection of lidocaine attenuated SNI-induced chronic mechanical hypersensitivity in mice (Fig. 2b). Interestingly, relief of mechanical hypersensitivity does not diminish the cardioprotective effect induced by SNI surgery. The infarct size was 34.8 ± 5.3% in the vehicle group (n = 7) and 40.8 ± 6.5% in the lidocaine group (n = 5), respectively (Fig. 2c). To rule out the effect of lidocaine on cardioprotection independent of neuropathic pain, we also infused lidocaine in sham animals. The results showed that lidocaine infusion in sham groups had no cardiac protection effect (78.2 ± 2.3%, n = 5) (Fig. 2c). Thus, maintenance of chronic pain status is not required for the SNI-induced cardioprotection.

Intrathecal infusion of lidocaine did not reduce SNI-dependent cardioprotection also suggests that this cardioprotective signal is not originated from the spinal cord level. Previous studies showed changes in higher brain centers are important for maintaining and/or developing chronic pain31,32,33. Thus, we hypothesized the SNI-induced cardioprotective signal is originated from brain regions involved in central sensitization in chronic pain. Mitogen-activated protein kinase phosphorylates and activates ERK and plays a critical role in organizing neural plasticity34. ERK activity in the spinal cord plays an important role in transmitting the nociceptive signal and in central sensitization35. From our previous study, ERK activity in the anterior part of the paraventricular thalamus (PVA) is required for maintaining chronic muscular pain36. We have recently shown that inhibition of ERK activity in PVA attenuated SNI-induced neuropathic hyperalgesia37. To test whether PVA is involved in the SNI-induced cardioprotection, we infused U0126 (1.5 nmol), a MEK inhibitor, or its inactive analog, U0124 as a negative control for U0126, into PVA. U0126 or U0124 was infused 3 days after SNI or sham operation and mice were subjected to IR injury 2 days after PVA infusion (Fig. 3a). This concentration of U0126 reduces formalin-induced and acid-induced mechanical hyperalgesia when applied in amygdala or PVA, respectively36, 38. U0126 but not U0124 infusion decreased the number of pERK-positive cells in PVA (Fig. 3b) and attenuated mechanical hyperalgesia induced by SNI at day 5 (Fig. 3c). PVA infusion of U0126 or U0124 in sham groups did not induce any observable pERK-positive cells in PVA (Fig. 3b). Most of the pERK signals were co-localized with NeuN-positive signals, which indicates PVA neurons were activated in the SNI-induced neuropathic pain mice (Fig. 3b). We then examined the effect of U0126 on SNI-induced cardioprotection. The results demonstrated that intra-PVA infusion of U0126 but not U0124 abolished SNI-induced cardioprotection (Fig. 3d). The infarct size of the U0124 group (38.6 ± 2.4%, n = 6) was similar to the SNI group shown in Fig. 1b. In contrast, the infarct size of U0126 group (71.4 ± 6.8%, n = 5) was comparable to those of naïve or sham group (Fig. 3d). Serum CKMB levels were also significant higher in U0126 compared to U0124 groups (Supplementary Fig. 3). The infarct sizes of U0124 and U0126 infusion in sham groups were similar to the sham group shown in Fig. 1b. There was no significant difference in the histology and fibrosis between U0124 and U0126 infusion in sham groups (Supplementary Fig. 4A). Thus, inhibition of ERK activity in PVA abolishes the SNI-induced cardioprotection.

To examine whether SNI led to electrical remodeling of PVA, we recorded PVA neuronal activity using a multichannel probe in anesthetized mice with electric current stimulations on left sciatic nerve. The exact channels inserted into PVA were identified via the post hoc histological examination of lesions marks. In vivo recording revealed that PVA neurons were excited by noxious stimuli in a strength-dependent manner in naïve mice, indicating PVA is indeed involved in the nociception circuitry (Fig. 4a). The evoked sweep spike unit of PVA neuron in naïve mice (Fig. 4b) patterned with two components: the fast-responding component (FC), responded to sciatic nerve stimulus started from 100 to 400 ms, and the late component (LC), responded to stimulus later than 400 ms. The peak responding time for the FC was 200–300 ms after stimulus. FC showed a trend of increase of sweep numbers in SNI group compared to naïve group (Fig. 4c). Interestingly, there was a new response component (100 ms-FC) recorded within 100 ms after sciatic stimulation in SNI-induced chronic hyperalgesia mice (Fig. 4b, c). The increase of spike units and the new 100 ms-FC indicate a switch of firing pattern under noxious stimulus in SNI-group, which suggests a neuronal plasticity switch at the chronic phase after nociception induction. We also examined the expression of c-fos as a marker for neuronal activation. A significant increase in the c-fos-positive neurons in PVA was observed in SNI compared to sham group 4 h after surgery (Fig. 4d). Together, these results demonstrate that PVA neurons are activated by stimulation on the peripheral nerve and their activities are further enhanced in SNI model.

We next asked whether pharmacological activation of ERK in PVA also has an effect on cardioprotection without peripheral neuronal injury. We infused PDBu (20 pmol), a protein kinase C activator, into PVA either once or twice before IR injury (Fig. 5a). Infusion of PDBu once induced to a transient hyperalgesia; interestingly, infusion of PDBu twice induced a sustained hyperalgesia (Fig. 5b). Activation of ERK in PVA was examined by immunostaining after IR injury and the results showed that repeated PDBu infusion increased the pERK-positive signals compared to DMSO or single PDBu infusion groups (Fig. 5c). Mice received repeated PDBu infusion exhibited a significant smaller infarct size (27.6 ± 5.7%, n = 5) compared to DMSO group (70.9 ± 4.7%, n = 6). These results demonstrated that infusion of PDBu into PVA, presumably via activation of ERK, induces cardioprotection in the absence of peripheral neuronal injury.