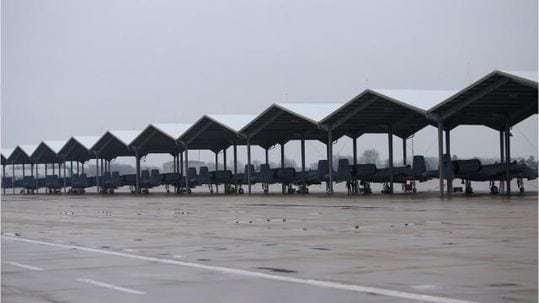 It’s the little things we take for granted.

The things we can’t live without, until we have to.

At 6 feet 3, Motycka, 33, of Portage really doesn’t fit very well in the twin-size bunk bed he has been sleeping in for the last several months with the 380th Air Expeditionary Wing at Al Dhafra Air Base in the United Arab Emirates — a base that, for the better part of 25 years, was an undisclosed location. Its location recently was allowed to become public, said Air Force Maj. Nicole Reigelman, chief of public affairs.

The wing is hosted at Al Dhafra Air Base, an Emirati military installation near Abu Dhabi. The U.S. compound houses about 3,500 people, with about 3,000 of them Air Force personnel. There are also are service members from the Army, Navy and Marines and partner nations.

Launching jets at all hours of the day, Reigelman said, the base needs crucial support personnel, such as these three Michigan Air National Guardsmen, to keep it running 24-7.

The trio left in the spring and hope to come home by Thanksgiving after a six-month deployment. For each, it is his first deployment to this base.

The Free Press was given the opportunity to talk with trio by phone in September to learn about their roles, their experiences and what they miss about home.

All of them work the swing or midnight shift — which they don’t mind because it’s a little slower and cooler than the 100-plus degree days. It neared 130 degrees in July and 115 degrees on the day of their Free Press interview.

While the temperature drops when the sun goes down, they said, the humidity spikes, making 80 degrees feel like 110 degrees.

“People working at night is greatly reduced. There’s a lot more leeway to train our younger guys and make significant impacts on the project at hand,” he said.

Carlisle, 30, is from Ann Arbor, with his home near the University of Michigan stadium. He roots for Notre Dame, but says with a laugh that the Wolverines’ “success is good for my property value.”

He’s based at Selfridge Air National Guard Base in Harrison Township, which is celebrating its 100th anniversary this year and is in line to possibly be a new home of the F35 fighter jets.

Carlisle, who has been deployed before, has been with the Air Force for a decade and with the Air National Guard for four years. He works with electrical systems, maintaining power distribution at the base.

His role is blended to be like a regular electrician and a DTE Energy lineman. There are 30 people who do this type of work, which is around the clock on three, eight-hour shifts.

Motycka and Watson are with the 110th Attack Wing in Battle Creek.

Motycka said he has been with…