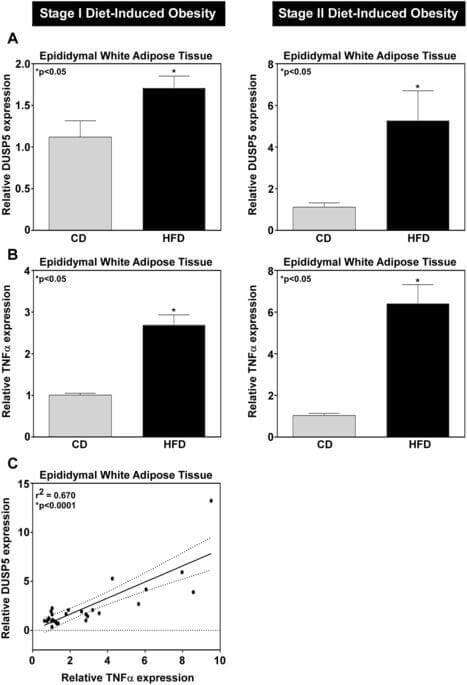 Obesity is a global epidemic and major public health concern, in which obesity increases the risk of chronic illnesses such as; cardiovascular disease, stroke and type II diabetes1. Chronic, low-grade inflammation plays a causal role in the loss of insulin sensitivity of adipose tissue; adipose tissue inflammation and dysfunction link obesity to the pathogenesis of type II diabetes2,3. A key event in obesity is characterized by macrophage infiltration in adipose tissue, which triggers increased secretion of pro-inflammatory adipokines such as monocyte chemoattractant protein-1 (MCP-1) and tumor necrosis factor α (TNFα). Secretion of MCP-1 further attracts macrophages to adipose tissue, exacerbating pro-inflammatory adipokine expression that results in chronic inflammation and systemic insulin resistance3.

While it is well recognized that MAPKs are activated by phosphorylation of the conserved threonine and tyrosine residues within the T-X-Y motif in the activation loop by upstream MAPK kinases, less is known about their deactivation by phosphatases in the regulation of adipose inflammation6,13,14. Dual specificity phosphatases (DUSPs) constitute a subclass of protein tyrosine phosphatases that specifically dephosphorylate (i.e. deactivate) MAPKs. DUSPs are inducible protein phosphatases that have been shown to regulate cellular inflammation and more recently have been shown to play a role in obesity and insulin resistance, in particular through the regulation of MAPK deactivation14,15,16.

In this report, we show that TNFα-mediated phosphorylation of ERK1/2 and JNK stimulated expression of the ERK-specific phosphatase, dual-specificity phosphatase 5 (DUSP5) resulting in feedback inhibition of ERK signaling and ERK-dependent inflammatory gene expression in adipocytes. Consistent with…