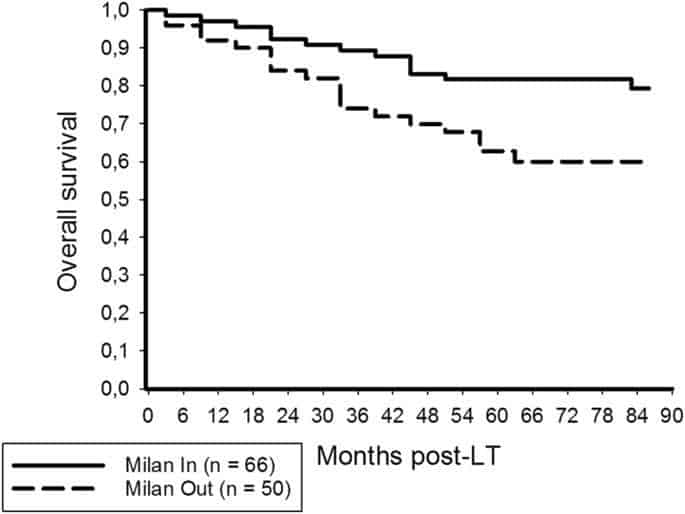 The Up-to-seven (UTS) criteria (sum of tumor size and number not exceeding 7) for indicating liver transplantation (LT) in hepatocellular carcinoma (HCC) were originally based on explant pathology features and absence of microvascular invasion (MVI). 18F-fludeoxyglucose (18F-FDG) positron emission tomography (PET) was shown to indicate the risk of MVI and tumor recurrence. The aim of this study was to analyze the prognostic significance of the clinical UTS criteria when being combined with PET-status of the tumor. Data of 116 liver transplant patients were subject to retrospective analysis. Five-year recurrence-free survival (RFS) rates in patients meeting (n = 85) and exceeding (n = 21) the radiographic UTS criteria were 81% and 55.1%, respectively (p = 0.014). In the UTS In subset, RFS was significantly better in PET-negative (94.9%) than in PET-positive patients (48.3%; p < 0.001). In the UTS Out subset, 5-year RFS rates were 87.1% and 19% in patients with non- 18F-FDG-avid and 18F-FDG-avid tumors (p < 0.001), respectively. Positive PET-status was identified as the only independent clinical predictor of tumor recurrence in beyond UTS patients (Hazard ratio [HR] 19.25; p < 0.001). Combining radiographic UTS criteria with FDG-PET may safely expand the HCC selection criteria for LT.

Hepatocellular carcinoma (HCC) is currently the fifth most common cancer and the third most common reason of cancer-related death worldwide1,2. Surgical resection is the treatment of choice. However, due to underlying cirrhosis with related liver dysfunction, major hepatectomy is often not practicable3,4. From an oncological point of view, liver transplantation (LT) is the best treatment option, since it removes the tumor and the tumor-generating cirrhosis5,6. Early experiences with LT for HCC were limited by high recurrence rates and poor survival7,8. In a landmark study of 1996, Mazzaferro et al. were able to demonstrate that LT in early stage HCC leads to excellent long-term outcome that was not different from patients with non-malignant diseases. Overall (OS) and recurrence-free survival (RFS) rates at 4 years post-LT were 85% and 92% for patients meeting the so-called Milan criteria (MC; one single HCC nodule of up to 5 cm, or a maximum of 3 tumor nodules, each not exceeding 3 cm and absence of macrovascular invasion), but only 50% and 59% for those exceeding them9,10. Consequently, the MC were implemented as standard for selecting suitable liver transplant recipients in the major allocation areas around the world.

In recent years, there is a growing concern that the MC may be too restrictive and inappropriate to satisfy continuously growing waiting list demands11,12. Several studies have shown that a subset of patients with HCC exceeding standard criteria may benefit from LT. Accordingly, numerous expanded criteria sets were proposed in the last two decades, such as the University of California (UCSF)13, Toronto14, Valencia15 and Hangzhou criteria16, to name just a few of them.

In 2009, Mazaferro et al. introduced the so-called Up-to-seven (UTS) criteria by simply combining the largest tumor nodule size and the number of HCC nodules, which should not exceed 7 in sum. In a large European multicenter trial including 1556 liver transplant recipients, they demonstrated that patients with HCC exceeding the MC but still meeting the UTS criteria have an excellent prognosis that was not different from patients meeting standard criteria HCC17. However, the authors have used post-LT generated histopathologic and not pre-LT radiographic features for their investigation18. Apart from that, beneficial outcome of the expanded HCC subset was related to lack of microvascular tumor invasion (MVI)17.

Tumor invasion into microscopic vessels is recognized as a major indicator of aggressive tumor behaviour and poor outcome19,20. However, it may reliably be assessed only on explant pathology and not by conventional radiographic imaging21. Therefore, for a safe application of the UTS criteria, the implementation of appropriate clinical biomarkers of tumor aggressiveness seems to be mandatory20.

The primary aim of this retrospective study was to analyze the prognostic value of the UTS criteria when being based on pretransplant imaging. Apart from that, we investigated whether the combination of the radiographic UTS criteria with 18F-FDG PET may be useful for predicting posttransplant tumor recurrence and, thus, for safely expanding the pool of suitable liver transplant patients.

The study protocol was approved by the local Ethics Committee (Ethical committee of the Medical School, Technical University Munich, Nr. 217/15). Patients’ registration, waiting list management and transplant procedures were performed according to national law and re-gulations. Prior to LT, all patients gave informed consent that follow-up data may be used for study purpose and respective publication. This work was supported by the German research Foundation (DFG) and the Technische Universität München within the funding programme Open Access Publishing.

Since December 2007, patients with HCC meeting the MC received exceptional priority status according to the model of end-stage liver disease (MELD) score. Based on HCC topography and remaining liver function, transarterial chemotherapy (TACE) as bridging to LT has been performed. Pretransplant tumor surveillance consisted of liver ultrasound and AFP level determination every 6 weeks, and CT/MRI scan minimum biannually. Additional radiographic imaging was performed when required, such as post-TACE, prior to MELD score upgrading and in the case of tumor-related symptoms.

Progression of tumor load beyond the MC resulted in loss of MELD exceptional priority status. Apart from that, a concise re-evaluation by computed tomography (CT) and/or magnetic resonance tomography (MRI) and AFP level determination every 3 months was initiated. According to an individual decision making process, these patients were primarily scheduled for center-based liver allocation, unless macrovascular tumor infiltration, lymph node infiltration or extrahepatic tumor spread (biological tumor progression) became evident.

18F-FDG PET was performed in all patients with liver malignancy in order to exclude extrahepatic tumor manifestation. The prospectively collected data were retrospectively used for the assessment of metabolic tumor properties.

ABO-compatible deceased donor liver grafts were used for transplant procedure in all study patients. Venous reconstruction was performed by using the piggy back technique without veno-venous bypass. In order to avoid the theoretical risk of systemic tumor cell spread, we have not used intraoperative blood salvage autotransfusion. Posttransplant immunosuppression consisted of a calcineurin inhibitor based regimen either by cyclosporine A or tacrolimus augmented by azathioprine or mycophenolate mofetil. Prednisone was withdrawn latest 3 months post-LT with exception of pre-existing autoimmune hepatitis. Tumor surveillance post-LT consisted of AFP-level determination and liver ultrasound at least every three months. Apart from that, CT scans of the chest and abdomen were performed every 6 months during the first posttransplant year and minimum thereafter or in case of suspected HCC relapse.

The baseline clinicopathologic characteristics are summarized in Table 1.

Based on clinical staging, 66 patients were classified as Milan In (56.9%) and 50 patients as Milan Out (43.1%), whereas tumors were meeting and exceeding the UTS criteria in 85 (73.3%) and 21 (26.7%) patients, respectively. UTS In and UTS Out patients did not significantly differ with regard to gender, age, liver diseases, Child classification, MELD score, AFP level, TACE and PET status. Explant histopathological studies revealed more tumors demonstrating with MVI in the UTS Out subset (Table 1).