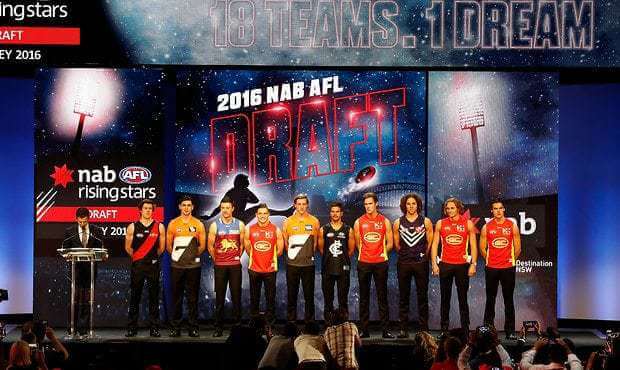 Pick 15: Jordan Gallucci
Made his AFL debut in the Crows’ round nine win against the Brisbane Lions at the Gabba, gathering 11 possessions and kicking a goal. It was his only senior appearance of the season as the midfielder spent the rest of the year in the SANFL where he played 13 games. The Victorian is yet to sign a new contract beyond the end of 2018.

Pick 44: Myles Poholke
Played 16 games in the SANFL alternating between the midfield and half-forward. Has the physical attributes for senior football already, but needs to improve his tank, ball use and defensive responsibilities to take the next step. Rewarded with a two-year extension until the end of 2020.

Pick 51: Elliott Himmelberg
Looks like a solid key position prospect after kicking 19 goals in his 13 games in the SANFL. However, a foot injury cut his season short and he didn’t play after mid-July. Himmelberg was used at either end of the ground and will be fit for the start of pre-season training at the end of November.

Pick 62: Matthew Signorello
Played 17 out of a possible 18 games in the SANFL, but only featured in their best players on two occasions. Spent time in the backline while also rolling through the midfield where he is most comfortable.

Pick 75: Ben Davis
The pacy forward was in the rehabilitation group for the first half of the year recovering from a foot injury before he played the final five games of the SANFL season. Showed some positive signs once he was able to get going, kicking four goals. A strong pre-season could see him push to take the spot in the forward line vacated by Charlie Cameron.

Rookie selection pick 13: Sam Shaw
Was only on the rookie list as an administrative measure. Shaw retired in November last year with on-going concussion-related symptoms.

Rookie selection pick 45: Ben Jarman
The Crows’ first father/son selection had a promising season, finishing fifth in the club’s state league best and fairest. Played all 18 games in the SANFL, was dangerous in attack with 12 goals and also showed bursts of speed on the wing. – Lee Gaskin

Pick 3: Hugh McCluggage
Excellent first season for the highly touted midfielder. Played 18 games and spent time mainly at half-forward with small stints in the middle. Took a bit of time to find his feet, but his excellent decision-making and ball use by foot was a standout. With a bit more strength and ability to absorb tackles, McCluggage will spend more time in the midfield in 2018.

Pick 17: Jarrod Berry
Like his good mate McCluggage, enjoyed a terrific first year at the Gabba. Berry quickly earned the trust of coach Chris Fagan, playing run-with roles on Brad Ebert and Joel Selwood, and spending a majority of time in the midfield alongside Dayne Beams, Tom Rockliff and Dayne Zorko during his 16 matches. Extended his contract and looks a future leader of the club.

Pick 23: Alex Witherden
After overcoming a broken leg in 2016 that hampered the start of his first AFL season, Witherden was a revelation in the back half of the year. He played nine of the final 10 games, averaged 24 disposals and gave the Lions plenty of drive from half-back with his accurate and penetrating right boot. An exciting talent, Witherden should progress even more next season playing alongside new teammate Luke Hodge.

Pick 24: Cedric Cox
Full of speed and skill, Cox was another draftee to impress in 2017. He split time between the NEAFL and AFL, playing 13 games for the reserves and eight games at the top level. He is an excellent decision-maker and just needs to get a little stronger to stick his tackles, which should come. Cox has extended his contract until the end of 2020.

Pick 55: Jacob Allison
Was made to earn his senior spot and grabbed it with both hands. Allison played 14 NEAFL games before debuting in the seniors in round 19. He played the final five AFL games and showed an ability to break lines with his speed and long kicking. Will need to continue improving his fitness to play on a wing, but has proved he can play at the top level.

Pick 71: Corey Lyons
Developed well in the NEAFL, playing 19 games, and has signed on until the end of 2019. Lyons played both in defence and the midfield, averaging 20 disposals, and showed good hands in tight. He looks capable of playing senior football in 2018.

Rookie selection pick 2: Jake Barrett
Surprise packet that played 17 senior games after being delisted by the Giants the previous year. Hard-worker who did well after being put in the tricky small forward’s role. With more competition for spots next season, will have to tidy up his disposal to get more games.

Rookie selection pick 20: Mitchell Hinge
Played 20 games in the NEAFL and was an integral member of the club’s premiership. Impressed with his intercept marking and left-footed disposal. Hard to crack the seniors in that part of the ground.

Rookie selection pick 37: Oscar McInerney
The gangly ruckman has been rewarded for his NEAFL Player of the Year season with a two-year contract extension. Third in line behind Stefan Martin and Archie Smith, McInerney is good at ground level but needs to work on his aggression. – Michael Whiting

Pick 6: Sam Petrevski-Seton
Lived up to expectations after missing much of the pre-season with a quad injury. Stepped straight in and excited fans with his class and skill, playing 20 games and earning a NAB AFL Rising Star nomination. Contracted until the end of 2021, he is destined to spend plenty of time in the midfield in 2018. Star in the making.

UNBELIEVABLE! That’s got to be a @coateshire Goal of the Year contender from Sam Petrevski-Seton