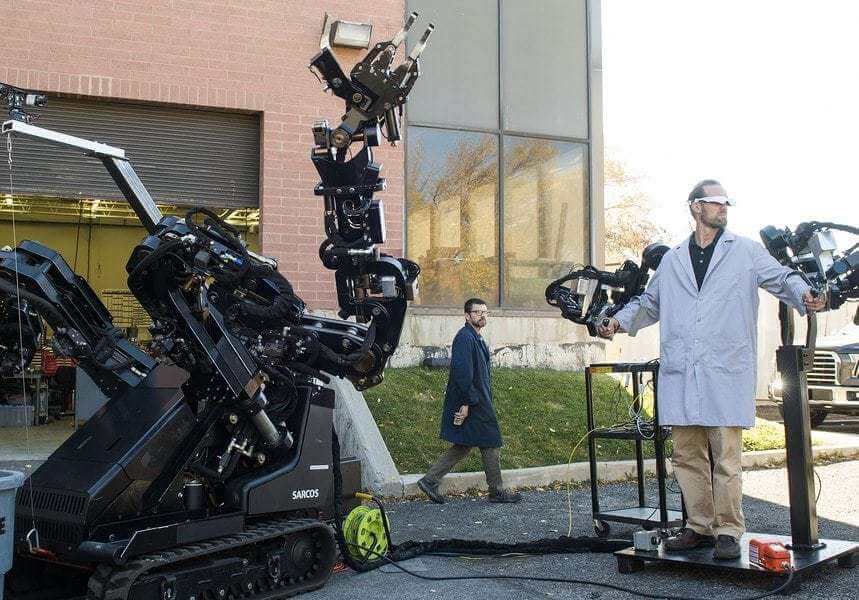 A mechanical engineer at Salt Lake City-based Sarcos Robotics, he slid his arms into its girded sleeves until his index fingers reached triggers that manipulated “thumbs” on hands at the end of two 7-foot-long arms of an industrial-strength robot, the Guardian GT. It was mounted on tanklike tracks about 10 yards in front of him.

Hirschi donned some opaque goggles that let him see the view from a camera mounted on the robot’s front frame, much like eyes in a head. He slowly, steadily moved his arms in the sleeves. The Guardian GT’s lengthy arms mirrored his movements.

With one hand, Hirschi grabbed hold of a band saw. With the other, he pushed a button powering up the saw to cut a piece of pipe off of what looked like a bank vault. Hirschi then methodically wiggled his arms in ways that allowed the robot’s elongated arms to open a standard circuit-breaker box, the kind found at most houses with the little tab that has to be depressed slightly to release the front door.

“Instead of showing you how strong it is — it can lift 1,000 pounds — we wanted you to see its dextrous movements,” said Ben Wolff, chairman and CEO of Sarcos Robotics.

He was speaking last week to a selected group of market analysts and writers from trade publications that focus on robotics and other high-tech topics, describing several new products that the company is marketing to commercial and industrial customers now that it has reduced contractual ties with the U.S. military.

“We have made a commitment, as a team, not to weaponize the robots we make,” Wolff told the writers from PC Magazine, ZDNet, Popular Mechanics, Oil & Gas Engineering, The Robot Report, research firms ABI and IDC, and The Salt Lake Tribune. “Saving lives is what we want to do.”

The company’s pitch also reflected the softer side of its products’ attributes, emphasizing their maneuverability and nimbleness over their physical power.

“Chris was able to push down the tab to get the door to open, and press small buttons, so it isn’t just capable of brute force,” Wolff observed as Hirschi tapped buttons, turned a steering-wheel-shaped valve opener and adjusted levers.

“Those are things you need in case of, say, a nuclear power plant accident. You want freedom of movement, flexibility, responsiveness to the operator’s commands,” Wolff said. “There’s been lots of interest from the construction and manufacturing industries. We’re close to selling one to the nuclear-power industry.”