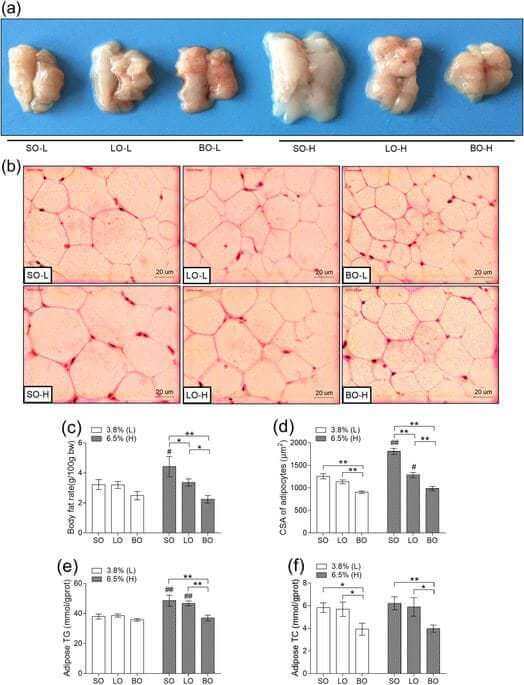 Obesity, which is associated with dietary habits, has become a global social problem and causes many metabolic diseases. In China, both percentages of adult obesity and overweight are far lower compared to western countries. It was designed to increase the two levels of daily intake in human, namely 3.8% and 6.5%, which are recommendatory intake (25 g/d) and Chinese citizens’ practical intake (41.4 g/d), respectively. The mice were respectively fed with feeds added with soybean oil, lard or the oil blended by both for 12 weeks. In the mice fed with diet containing 3.8% of the three oils or 6.5% blended oil, their body weight, body fat rate, cross-sectional area of adipocytes, adipogenesis and lipogenesis in adipose were decreased, whereas hydrolysis of triglyserides in adipose was increased. This study demonstrated that the oil mixture containing lard and soybean oil had a remarkable anti-obesity effect. It suggests that the traditional Chinese dietary habits using oils blended with lard and soybean oil, might be one of the factors of lower percentages of overweight and obesity in China, and that the increasing of dietary oil intake and the changing of its component resulted in the increasing of obesity rate in China over the past decades.

The rise in obesity has aroused increasing concerns around the world. In recent decades, the obesity prevalence rates are enhancing with rapid speed far beyond expectations, as evidenced by the fact that in 2014, about 266 million men and 375 million women were found to be obese in the world, compared to 34 million men and 71 million women in 1975. Among different countries, China has more obese men and women than the USA, becoming the largest obese population1. Notably, obesity can lead to huge personal, social, and economic costs. McKinsey Global Institute has reported that obesity results in about 5% of global death, and the global economic cost from obesity is close to $2.0 trillion, around 2.8% of global GDP2.

The development of obesity is obviously relevant to genetic and epigenetic factors including dietary habits. Interestingly, as the 2016 Global Nutrition Report showed, the dietary habits in western countries are characterized by high fat, carbohydrate and calorie, and the adult obesity prevalence in most of the western countries, especially in the USA and the western of Europe is approximately 30%, while the adult overweight prevalence has already exceeded 60%. In countries that familiarized to Mediterranean diets, which are commonly acknowledged as a healthy dietary habit, the prevalence of adult obesity is over 20%, and the prevalence of adult overweight are around 60%. In China, the percentage of adult obesity and overweight are 6.9% and 34.4%, respectively, and notably, both are far below western countries3. Lard is one of the most popular cooking-oils in Chinese gastronomy, and it has great effect on diuresis, blood clearance, activating blood circulation, and detoxification. It has been reported that people with longevous lifespan in China were used to eat pork braised in brown sauce, a Chinese food rich in blend oil.

From the perspective of concentration of fatty acids, the contents of saturated fatty acids (SFAs) or monounsaturated fatty acids (MUFAs) are considerably higher than polyunsaturated fatty acids (PUFAs) in lard, whereas in majority of vegetable oils, it contain the higher level of PUFAs or MUFAs but the lower level of SFAs than lard. It has been proposed that dietary MUFAs and PUFAs are correlated with reduction of coronary heart disease (CHD)4,5,6, cardiovascular disease (CVD), hypertension, diabetes mellitus, anorexia nervosa, and obesity7,8. Increasing intake of a high SFAs diet can also be a risky factor for hypertension9, hypercholesterolemia10 and CVD11. However, these results are controverted by other studies12,13. SFAs play crucial roles in normal cellular and tissue metabolism and they function as the same importance as MUFAs and PUFAs. For instance, it has been suggested that MUFAs might not be the proper substitute for SFAs14, and replacement dietary SFAs with ω-6 linoleic acid, shows no evidence of cardio-protection15. In addition, SFAs reduction alone is not enough to reduce the risk ofCHD10.

In healthy people, the majority of fatty acids consumed in the diet are accessible to the bloodstream through efficient process of digestion and absorption16. Whether a qualitative or a quantitative imbalance of dietary fatty acids has been implicated in a number of chronic diseases as mentioned above. The World Health Organization (WHO) and China’s Public Union of Nutrition recommend that the proportion of calorie from lipid should not be lower than 20% or higher than 30% in adult daily food, and the ratio of SFAs, MUFAs and PUFAs should be preferably 1:1:1. Among the Chinese gastronomy habits, many Chinese people prefer to blend lard with vegetable oil or use them as an alternation while cooking; in this way, they would not only advance the tastes of food, but also reduce the consumption of total oil by one third. From the point of fatty acids, the ratio of SFAs: MUFAs: PUFAs is closer to 1: 1: 1 through this method than using simple oil.

During the past few decades, it has been dramatically changed in Chinese dietary pattern. According to the data from Nutrition and Health Status of Chinese Residents, pressed by State Council Information Office of China in 2004, it has been reported that the consumption of cooking oil was increased to 41.4 g per day, which is far beyond the recommendation that should be taken per day (25~30 g cooking oil). In addition, there is an imbalance in the usage of daily cuisine oil, and an increasing number of people tend to choose vegetable oil rather than lard. The daily consumption of oil contains 31.7 g vegetable oils and 8.7 g animal fats, and the proportion of soybean oil is more than 40% among the cooking vegetable oils. Correspondingly, the morbidities of metabolic diseases, e.g. obesity, hypertension, and type 2 diabetes have been increased as well. It may be implicated that these diseases and metabolic disorders are closely correlated with the oil intake pattern. In view of these points, this study was aimed to investigate the effect of Chinese oil consumption habit on fat deposition in mouse models. It was designed to enhance two levels of daily intake in human, which are recommendatory volume (25 g/d) and Chinese citizens’ practical volume (41.4 g/d), amount to 3.8% and 6.5% oil of diet in mice model respectively. The mice were fed with different types of oils, including soybean oil, lard and the two oil mixtures, for 12 weeks. We revealed the correlation between obesity and traditional Chinese oil intake custom, and unraveled the mysteries of lower prevalence of obesity in Chinese.

Furthermore, a significant difference was observed in the body fat rate, and BO-H was the lowest whereas SO-H was the highest in the group of diet containing 6.5% blended oil (P < 0.01) (Fig. 1a,c). To determine the effect of different kinds of oils on the adipose, we checked triglycerides (TG) (Fig. 1e) and total cholesterol (TC) (Fig. 1f) as well as pathological section of epididymal adipose tissues (Fig. 1b,d). The contents of TG in BO-H was significantly decreased while compared with LO-H and SO-H (P < 0.01). There was a significant decrement of TC in the mice fed with diet of blended oil than soybean oil and lard (P < 0.01). Tendency of cross-sectional area (CSA) of adipocytes was similar to TC, TG. Histological examination revealed that compared with the two single oils, supplementation with blended oil resulted in reduced CSA of adipocytes (P < 0.01), and conversely, significant increment of CSA of adipocytes was observed in mice fed with diet of soybean oil (P < 0.01). It was worth noting that higher content of oil had more obvious influence on TG and CSA of adipocytes, especially in mice fed with diet containing soybean oil. These results demonstrate that blended oil can reduce body weight and content of lipid on adipose whereas higher oil enhances the content of fat on adipose.

Based on the results of biochemical parameters mentioned above, we next probed the mechanism of role of blended oil. Real time PCR showed that mRNA levels of peroxisome proliferator-activated receptor γ (PPARγ) and CCAAT/enhancer- binding proteins α (C/EBPα) were higher in LO-H than SO-H and BO-H (P < 0.01) (Fig.