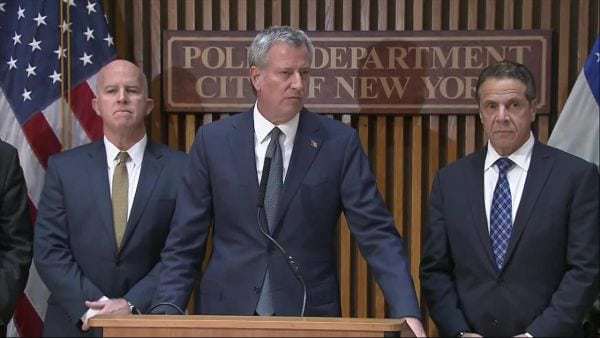 A driver identified by authorities as a lone-wolf terrorist took the wheel of a rented pickup truck Tuesday and careened down a bike path next to the Hudson River, killing eight people and injuring at least 11, the NYPD said.

Officials called it the worst terrorist event in New York City since Sept. 11, 2001, when the World Trade Center towers — just blocks away from Tuesday’s attack — came crashing down. A source said investigators found handwritten notes near the pickup truck pledging allegiance to ISIS.

The rampage began at 3:05 p.m. Tuesday, when the suspect, identified by sources as Sayfullo Saipov, 29, an Uzbekistan immigrant, drove a rented Home Depot truck, entering the West Side Highway bicycle path at Houston Street, mowing down bikers and pedestrians on the waterfront pathway until he left at Chambers Street.

He collided with a school bus near Stuyvesant High School, injuring two adults and two children inside, and emerged from the vehicle holding what appeared to be two firearms – later recovered and determined to be a paintball gun and a pellet gun – after the crash, officials said.

An NYPD officer assigned to the First Precinct, Ryan Nash, 28, of Medford, stopped the attack when he shot the man in the abdomen. The suspect was taken into custody, and sources said he was taken to Bellevue Hospital Center. The AP reported he was in surgery and was expected to survive.

NYPD Commissioner James O’Neill praised the officer, saying he “stopped the carnage moments after it began.”

Mayor Bill de Blasio said it was a “very painful day in our city. . . . This was an act of terror. And a particularly cowardly act of terror aimed at innocent civilians, aimed at people going about their lives who had no idea what was about to hit them.”

The attack was launched by a suspect whom Gov. Andrew M. Cuomo called the type of “lone wolf” increasingly responsible for such attacks. O’Neill said the suspect made statements that “enabled us to label it a terrorist event.”

“We also transported 11 people, all with serious but, at this moment, not life-threatening injuries. The injuries are what you may expect as a truck went at high speed down that bicycle path and struck bicyclists and pedestrians,” Nigro said.

The Argentine Consulate reported that Argentinian citizens were among those killed. The men were: Hernán Mendoza, Diego Angelini, Alejandro Pagnucco, Ariel Erlij and Hernán Ferruchi. The five, and a sixth man who was injured, were part of a group of friends in New York to celebrate the 30th anniversary of their school graduation. The Belgian Consulate reported one of its citizens was killed, the AP reported.

Tawhid Kabir, 20, a student from the Borough of Manhattan Community College, said he ran up a pedestrian bridge on Chambers Street and saw the gunman “chasing a man up West Street with two guns in his hands. When I heard the shots I went down on the ground ”

When Kabir stood up, he saw two bodies lying on the highway. “I saw the police put sheets over them,” he said.

Sources identified the suspect as a native of Uzbekistan from Paterson, New Jersey. He came from Uzbekistan about five or six years ago, moving to Florida and has a green card, the sources said.

The case is being jointly investigated by the FBI and the NYPD, who consider it to be an act of terrorism, but the suspect apparently acted alone, the sources said.

Cuomo, who was in Manhattan, called the suspect one of the “lone wolves who commit an act of terror” using “new…