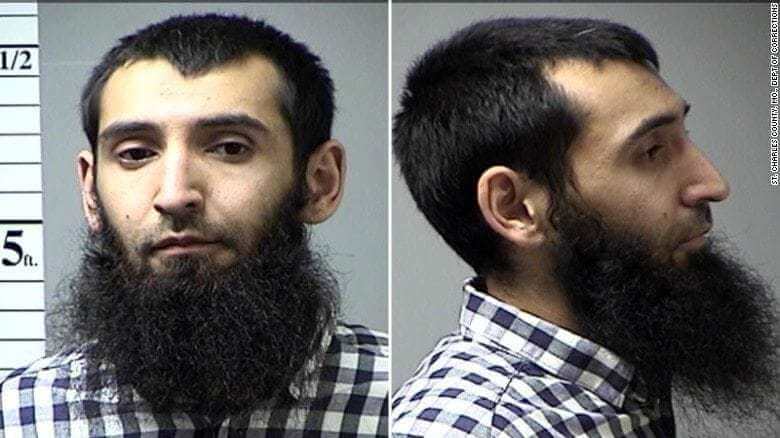 (CNN)Eight people were killed and almost a dozen injured when a 29-year-old man in a rented pickup truck drove down a busy bicycle path near the World Trade Center Tuesday in Manhattan, New York City.

The suspect was identified by two law enforcement sources familiar with the investigation as Sayfullo Habibullaevic Saipov. He’s from Uzbekistan in Central Asia but had been living in the US since 2010, sources said.

Authorities found a note claiming the attack was made in the name of ISIS near the truck used in the attack, a senior law enforcement official said.

“This was an act of terror, and a particularly cowardly act of terror,” New York Mayor Bill de Blasio said, “aimed at innocent civilians, aimed at people going about their lives who had no idea what was about to hit them.”

The incident is being investigated as terrorism, officials said. Witnesses reported the suspect was yelling “Allahu Akbar,” according to four law enforcement sources. The FBI’s Joint Terrorism Task Force is taking over the lead of the investigation.

Vehicles have been used as weapons in a number of terrorist attacks in recent years, including in deadly incidents in London and Nice, France.

The suspect, driving in a Home Depot rental truck, hopped a curb at West Houston Street and drove south on the bike path on the west side of West Side Highway in lower Manhattan for several blocks, officials said.

After crashing the truck into a school bus, the suspect left the vehicle while displaying imitation firearms and was shot in the abdomen by a police officer, according to the NYPD.

Just after the incident, news footage showed several mangled bicycles on the popular bike path as medics tended to the wounded in the background.

Six people were declared dead at the scene and two were pronounced dead at the hospital. At least 11 others were transported to the hospital with serious but non-life-threatening injuries, according to New York Fire Commissioner Daniel Nigro.

Five of those killed were Argentinians, a group of friends celebrating the 30th anniversary of graduates of the Polytechnic School in their hometown, the country’s Ministry of External Affairs said in a statement.

A spokesman for Home Depot confirmed one of the company’s rental trucks was part of an incident in lower Manhattan and said the company is “cooperating with authorities” in the investigation.