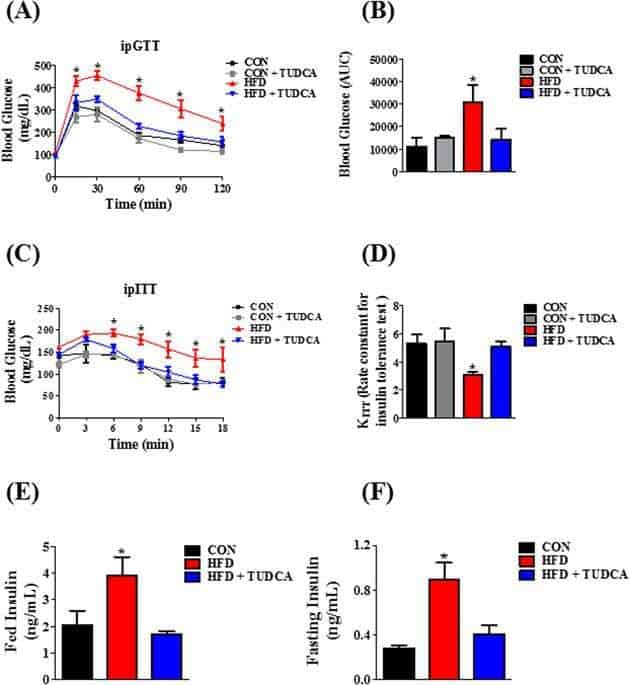 Disruption of insulin secretion and clearance both contribute to obesity-induced hyperinsulinemia, though reduced insulin clearance seems to be the main factor. The liver is the major site for insulin degradation, a process mainly coordinated by the insulin-degrading enzyme (IDE). The beneficial effects of taurine conjugated bile acid (TUDCA) on insulin secretion as well as insulin sensitivity have been recently described. However, the possible role of TUDCA in insulin clearance had not yet been explored. Here, we demonstrated that 15 days treatment with TUDCA reestablished plasma insulin to physiological concentrations in high fat diet (HFD) mice, a phenomenon associated with increased insulin clearance and liver IDE expression. TUDCA also increased IDE expression in human hepatic cell line HepG2. This effect was not observed in the presence of an inhibitor of the hepatic membrane bile acid receptor, S1PR2, nor when its downstream proteins were inhibited, including IR, PI3K and Akt. These results indicate that treatment with TUDCA may be helpful to counteract obesity-induced hyperinsulinemia through increasing insulin clearance, likely through enhanced liver IDE expression in a mechanism dependent on S1PR2-Insulin pathway activation.

Obesity is the primary cause of hyperinsulinemia, which increases the risk for cancer and cardiovascular diseases1,2 and potentiates insulin resistance that may trigger type 2 diabetes (T2D)3. High levels of plasma insulin concentration can be attributed to increased insulin secretion and/or decreased insulin clearance4,5; however, there is evidence that reduced insulin clearance is likely the primary factor in obesity-induced hyperinsulinemia6.

Insulin clearance occurs mainly in the liver by the action of insulin-degrading enzyme (IDE), which degrades approximately 50% of insulin in its first passage through the hepatic portal system7,8. IDE is a zinc metalloproteinase which degrades not only insulin but also other amiloidogenic peptides such as glucagon9, amylin10 and amyloid β11. Thus, malfunction of this enzyme is associated with T2D and Alzheimer’s Diseases (AD)12,13.

While there is a consensus that increasing IDE function in AD patients could be useful to treat this pathology, this same therapeutic approach is uncertain for patients with T2D. Improvement of insulin signaling and glucose tolerance was observed in mice treated with the IDE inhibitor 6bK14. However, treatment with BDM44768, another IDE inhibitor, impaired glucose tolerance, despite increasing insulin signaling15. In addition, IDE-deficient mice display chronic hyperinsulinemia that induces, over time, glucose intolerance as well as insulin resistance16, suggesting that the hyperinsulinemic state, due to IDE deficiency, could be a trigger for the development of T2D. In the same way, Goto-Kakizaki rats (a non-obese T2D animal model), which have a defect at the IDE gene, as well as some type 2 diabetic patients, exhibit reduced insulin clearance and augmented plasma insulin concentrations prior to the onset of T2D17,18. Therefore, we believe that therapeutic strategies focusing on increased IDE expression and insulin clearance could be helpful in the prevention and/or treatment of T2D, especially when hyperinsulinemia precedes the development of this pathology.

In this sense, insulin sensitizer agents such as physical exercise, bariatric surgery and pioglitazone treatment have been found to reduce plasma insulin concentrations in obese rodents, through increased insulin clearance and improved glucose homeostasis19,20,21. However, exercise has a low adherence rate22, bariatric surgery is an invasive procedure23, and pioglitazone treatment has significant side effects24. Thus, the use of endogenous molecules that increase insulin clearance, without the side effects or adherence concerns, could be a potential treatment for hyperinsulinemia.

In this context, the taurine conjugated bile acid tauroursodeoxycholic (TUDCA) has emerged as a possible candidate due to its beneficial effect upon glucose homeostasis25,26,27. In the liver, TUDCA improves insulin sensitivity by reducing endoplasmic reticulum (ER) stress28,29. Also, TUDCA activates insulin signaling in the liver, by the interaction with the sphingosine-1-phosphate receptor 2 (S1PR2), resulting in PI3K/Akt pathway activation30. However, the effect of TUDCA upon insulin clearance, as well as hepatic IDE expression remains unclear.

Here, using high fat diet (HFD) mice as an experimental model of hyperinsulinemia, we demonstrated that treatment with TUDCA normalizes their plasma insulin concentrations by increasing insulin clearance. This effect is probably due to increased IDE expression in the liver. In vitro experiments, using hepatic human cell line HepG2, demonstrated that TUDCA also increases IDE expression, by a mechanism dependent on the interaction of TUDCA with the S1PR2 receptor, via the insulin signaling pathway. These findings suggest treatment with TUDCA as a promising therapeutic intervention for the control of hyperinsulinemia in obese pre-diabetic individuals.

As expected, body weight was significantly…