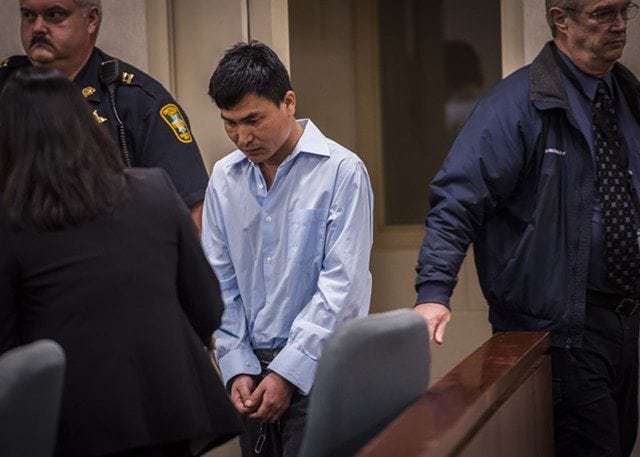 A man accused of hacking his wife to death with a meat cleaver in broad daylight on a Burlington street has been ordered held without bail and must undergo a mental competency and sanity evaluation, a judge ruled Friday afternoon.

A shackled Aita Gurung, 34, looked at the floor and showed no expression as an interpreter explained Judge Kevin Griffin’s orders during an appearance in Vermont Superior Court. Gurung will be evaluated at the University of Vermont Medical Center and will be kept in the custody of the Department of Mental Health until it’s complete, Griffin ruled.

Sara Puls of the Public Defender’s Office, who represented Gurung in court, entered not guilty pleas on his behalf.

“We believe he had every intention of murdering them and he knew that that’s what he was doing,” Chittenden County State’s Attorney Sarah George told reporters after the hearing.

George visited the crime scene at 72 Hyde Street in the Old North End and recounted for reporters a harrowing sight.

Gurung entered an Old North End deli that day and said he needed the police because he’d committed an act of domestic violence the night before and was having mental health issues, del Pozo recounted.

Officers investigated and found no evidence of a violent act at the couple’s residence, del Pozo said. The officers then interviewed his wife at her workplace, a Shelburne Road hotel. She had no visible injuries, according to police.

“She said ‘Yes, my husband is having mental health issues. He does take medicine. I…