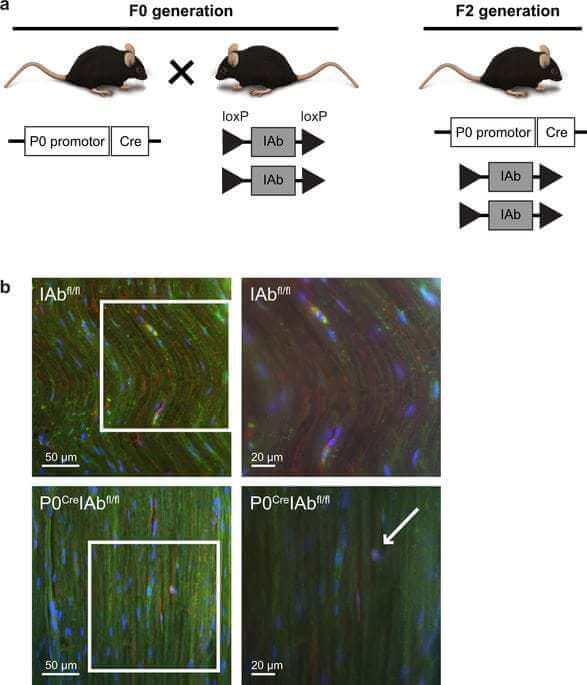 The activation of T helper cells requires antigens to be exposed on the surface of antigen presenting cells (APCs) via MHC class II (MHC-II) molecules. Expression of MHC-II is generally limited to professional APCs, but other cell types can express MHC-II under inflammatory conditions. However, the importance of these conditional APCs is unknown. We and others have previously shown that Schwann cells are potentially conditional APCs, but the functional relevance of MHC-II expression by Schwann cells has not been studied in vivo. Here, we conditionally deleted the MHC-II β-chain from myelinating Schwann cells in mice and investigated how this influenced post-traumatic intraneural inflammation and neuropathic pain using the chronic constriction injury (CCI) model. We demonstrate that deletion of MHC-II in myelinating Schwann cells reduces thermal hyperalgesia and, to a lesser extent, also diminishes mechanical allodynia in CCI in female mice. This was accompanied by a reduction of intraneural CD4+ T cells and greater preservation of preferentially large-caliber axons. Activation of T helper cells by MHC-II on Schwann cells thus promotes post-traumatic axonal loss and neuropathic pain. Hence, we provide experimental evidence that Schwann cells gain antigen-presenting function in vivo and modulate local immune responses and diseases in the peripheral nerves.

A central element of all adaptive immune responses is recognition of antigens by T cells. CD4+ T helper cells recognize their cognate antigen via class II major histocompatibility complexes (MHC-II) presented on the surface of antigen presenting cells (APCs). While MHC class I is expressed by all nucleated cells, MHC-II is generally only expressed by professional APCs (such as dendritic cells, macrophages or B cells)1,2. However, under inflammatory conditions, other cell types such as vascular endothelial cells and muscle cells can upregulate MHC-II expression and subsequently activate CD4+ T cells (under defined culture conditions in vitro and after injection of exogenous antigen in vivo)3,4,5,6. Such cell types have been described as conditional APCs and could potentially modulate local inflammatory diseases7, but strong in vivo evidence for a functional relevance of MHC-II expression by conditional APCs is lacking.

We and others have previously shown that the myelin-forming glial cells of the peripheral nervous system (PNS) – named Schwann cells – can also gain MHC-II expression after traumatic8 and inflammatory injury9 and may present antigens in vitro10,11. These surprising findings suggest a previously unappreciated function of Schwann cells as conditional APCs9 in addition to their function in myelination and axonal support12. However, like other conditional APCs, the functional relevance of MHC-II expression by Schwann cells has never been confirmed in vivo and could constitute either an important modulator of disease or an irrelevant epiphenomenon of inflammation. Here we tested this ‘conditional APC theory’ by using the PNS as a model system to delete APC function in a rigorous and genetically defined manner in vivo.

Previous data indicate that Schwann cells upregulate MHC-II under conditions inducing post-traumatic neuropathic pain in female rats8. Neuropathic pain is a debilitating condition associated with pain without adequate stimulus and due to decreased nociceptive thresholds13. Such triggering of a pain response from stimuli, which do not normally provoke pain, is termed allodynia and is a frequent clinical sign of neuropathic pain14. Neuropathic pain can result from various types of nerve injury, is common and affects up to one in twenty people worldwide – with a higher prevalence among women compared to men15,16. Evidence suggests that dysfunction of neurons and glial cells, but also…