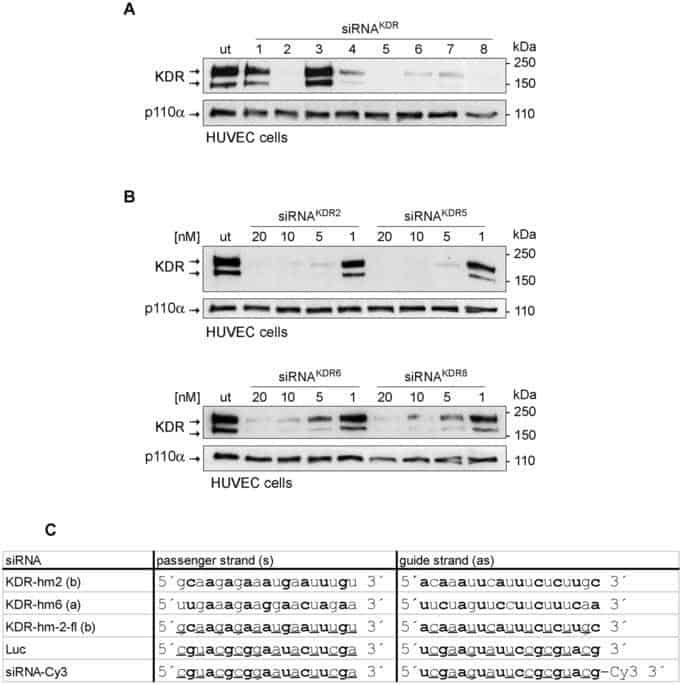 Development of portosystemic collateral vessels and gastroesophageal varices is responsible for the most serious clinical consequences of portal hypertension, but effective clinical therapies are limited. Here we developed and investigated the therapeutic potential of an innovative liposomally-formulated short-interfering RNA (siRNA) technology based on clinical stage components, capable to attenuate production of the endothelial kinase insert domain receptor (KDR), which controls portosystemic collateralization and contributes to disease progression and aggravation. These siRNAs were first validated in vitro, and then, their therapeutic potential on portosystemic collateralization and pathological angiogenesis was tested in vivo in mouse models of portal hypertension (portal vein-ligation). siRNAKDR-lipoplexes efficiently transported siRNAKDR to vascular endothelial cells in mesenteric microvenules and portal vein of portal hypertensive mice, where collaterogenesis and angiogenesis take place. This systemic treatment significantly downregulated pathological KDR overexpression, without causing complete KDR knockout, preserving homeostatic baseline KDR levels and thus limiting adverse effects. siRNAKDR-lipoplex-induced endothelial-specific KDR knockdown drastically reduced by 73% the portosystemic collateralization, and impaired the pathologic angiogenic potential of vascular endothelial cells at different levels (cell proliferation, sprouting and remodeling). Targeting endothelial KDR with therapeutic siRNAKDR-lipoplexes could be a promising and plausible treatment modality for attenuating the formation of portosystemic collaterals in a clinical setting.

Portal hypertension is one of the most significant complications of chronic liver diseases, which represent serious threats to human health1,2. A major determinant of the severity of portal hypertension and liver disease is the development and maintenance of portosystemic collateral vessels, which include the gastroesophageal varices3,4,5. These varices are fragile and particularly prone to leak blood and even rupture, causing upper gastrointestinal tract bleeding. This hemorrhage is often torrential and difficult to staunch, and, despite many advances made in this field, it continues to be the cause of significant morbidity and mortality in patients3,4,5. Furthermore, because portosystemic collaterals shunt blood from the portal vein to the systemic circulation bypassing the liver, noxious substances that are normally metabolized by the liver, such as drugs, toxins, hormones and bacteria, can escape to the central venous system, leading to other potentially lethal consequences, such as portosystemic encephalopathy, spontaneous bacterial peritonitis or systemic infections. Therefore, one major objective in the treatment of portal hypertension and liver disease in humans is the prevention and reduction of portosystemic collateral growth3,4,5.

Portosystemic collaterogenesis in portal hypertension and chronic liver disease is currently being recognized as a complex dynamic process that involves the reopening of collapsed embryonic channels, and the de novo formation of new collateral vessels through sprouting angiogenesis6,7,8,9,10,11,12,13,14,15. Newly formed collaterals undergo additional structural and functional changes through vascular remodeling6,7,8,9,10,11,12,13,14,15. Kinase insert domain receptor (KDR), also known as VEGF receptor-216,17,18,19,20, is an endothelial cell surface receptor that is abundantly expressed in portal hypertension but not in normal tissues, and has a central role in the regulation of portosystemic collateral development6,7,8,9,10, and pathological angiogenesis16,17,18,19,20, as we and other groups have previously demonstrated. This means that KDR could be an excellent therapeutic target for portal hypertension and chronic liver disease21,22,23. This is especially important because, although the pathophysiology and clinical consequences of portosystemic collateral growth have been studied in detail, this knowledge has not been accompanied by parallel advances in therapies.

Here we describe a new therapeutic strategy for treatment of portosystemic collateralization in portal hypertension. This treatment is based on short interfering RNA (siRNA) technology24,25,26, which has broad potential as a therapeutic to attenuate production of specific target proteins in vivo and for the treatment of disease. It has in fact emerged as one of the most promising platforms for therapeutic product development. In particular, we have developed highly effective siRNA sequences against KDR (siRNAKDR), which have been chemically modified to provide stability in the bloodstream and evasion of the immune system. These siRNAKDR have also been encapsulated within clinically suitable delivery materials to form siRNAKDR-lipoplexes, which not only preserve biological activity but also enhance stability and systemic delivery specifically to vascular endothelial cells27,28,29,30,31,32. Our results demonstrate the efficacy of this improved treatment modality to specifically knockdown the disease-induced KDR overexpression, and robustly attenuate the severity of portosystemic collateral vessels in a murine model of portal hypertension. Of interest, a related type of formulation that we have also developed has been shown to be viable and well tolerated for systemic siRNA administration and is currently being evaluated in clinical trials for treatment of patients with advanced solid tumors31, further supporting the translational relevance and therapeutic potential of this approach for portal hypertension and chronic liver disease in a clinical context. Given the emerging roles of angiogenesis in a number of human pathologies, including inflammation, obesity and tumor growth, siRNAKDR-lipoplexes may provide a novel strategy to treat a wide spectrum of diseases.

siRNAs targeting human and mouse KDR were identified by in silico selection based on siRNA algorithm developed at Silence Therapeutics and functional in vitro tests initially performed in human umbilical vein endothelial cells (HUVECs) (Fig. 1A and B; full blots are shown in Supplementary Fig. S1). siRNAs that were used in this study are listed in Fig. 1C. They were synthesized by Biospring/Frankfurt a.M. Further in vitro siRNA transfection experiments were done in the murine endothelioma H5V endothelial cell line33,34,35. H5V cells were seeded on 6-well plates in 10% DMEM medium containing 10% fetal bovine serum, and incubated at 37 °C in a 5% CO2 humidified incubator. When cultures reached 60% confluence, gene-specific siRNA-lipoplexes were prepared by mixing siRNA and lipids (AtuFECTTM) and added to cells at a final concentration of 80 nM. Each transfection was performed in triplicate. Two different sequences of siRNAKDR were used (siRNAKDRa and siRNAKDRb; Fig. 1C). Empty liposome without siRNA and unrelated luciferase siRNA (siRNALuc) were used as controls to distinguish sequence-specific silencing from non-specific effects. In particular, the siRNALuc control is designed to have no known target in the cells being used (obviously the firefly luciferase gene is not present in mouse cells). Following incubation at 37 °C for 4 h, the culture medium was replaced with 2 mL of fresh medium supplemented with 10% fetal bovine serum. Cells were cultured under standard conditions for a further 48 h before being examined by real time PCR and immunoblotting to assess efficacy of gene silencing.

To analyze capillary tube-formation, ice-cold Matrigel (300 μL/well; BD Corning) was poured into 24-well culture plates and allowed to gel at 37 °C for 1 h. After 72 h of transfection, H5V cells (100,000 cells/well) were plated in fresh medium (DMEM supplemented with 10% FBS, 2 mM L-glutamine, 1% penicillin/streptomycin) and incubated for 16 h at 37 °C and 5% CO2. Then, cells were examined by phase-contrast microscopy and photographed at 25X and 50X. Tube formation was evaluated and scored as previously described34: (0) individual cells, well-separated; (1) cells begin to migrate and align themselves; (2) capillary tubes visible, no sprouting; (3) sprouting of new capillary tubes visible; (4) closed polygons begin to form; (5) complex mesh-like structures develop. Several random view-fields (4–8) per well were examined and the values averaged.

Portal hypertension was induced in male BALB/C mice weighing 25–30 g (Charles River) by partial portal vein ligation (PPVL)7,34. Under isofluorane anesthesia, a midline abdominal incision was made. The portal vein was separated from surrounding tissue, and a calibrated constriction was performed using a single ligature of 5–0 silk tied around the portal vein and a blunt-tipped 27-gauge needle. The needle was then removed, leaving a calibrated constriction of the portal vein. In sham-operated control mice, the portal vein was similarly manipulated but not ligated. All animals’ studies were approved by the Laboratory Animal Care and Use Committees of the University of Barcelona, and were complied with the National Institute of Health (NIH) guidelines on handling of experimental animals.

For in vivo studies, we used AtuPLEX2, a derivative of our previously described and characterized siRNA-lipoplex formulation AtuPLEXTM 27,36. Briefly, AtuPLEX2 is composed of the cationic lipid system AtuFECT01 (β-L-arginyl-2,3-L-diaminopropionic acid-N-palmityl-N-oleyl-amide trihydrochloride), cholesterol and ceramide C8 Peg (N-octanoyl-sphingosine-1-{succinyl[methoxy(polyethylene glycol)2000]}) in a molar ratio of 70:29:1, and blunt ended siRNA duplexes chemically stabilized by alternating 2′-O-methyl, 2′-fluoro modification on both strands (Fig. 1C). The formulation was prepared in 270 mmol/L sucrose. AtuPLEX2 particles display a Z-average size of 30-nm with a polydispersity index of 0.273 as determined by dynamic light scattering (Fig. 2A and B). AtuPLEX2 prepared with KDR-targeted siRNAs (siRNAKDR-lipoplexes) was intravenously injected into the tail vein of male BALB/c mice (n = 15), as described before28. AtuPLEX2 prepared with unrelated luciferase siRNAs (siRNALuc-lipoplexes) was injected in…