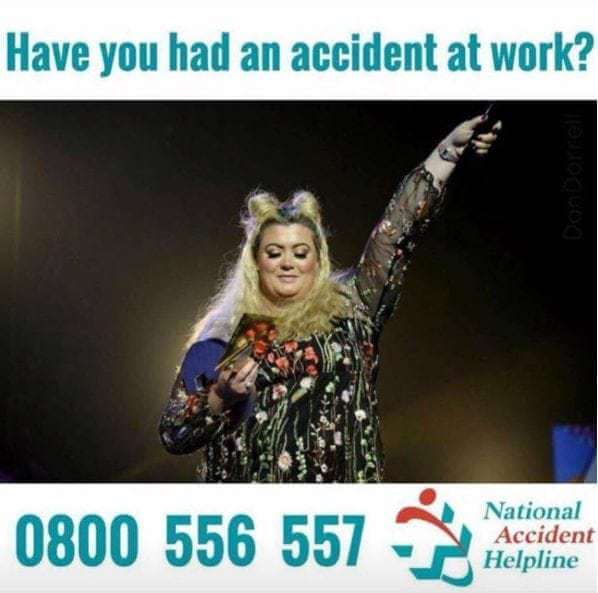 GEMMA Collins has laughed off falling through a trap door on stage at the Radio 1 Teen Awards.

The meme queen shocked the audience at the bash when she fell through a trap door on stage after announcing Love Island had won the award for Best TV Show.

However, the Towie star said it was “the best and worst moment” but has kick started the memes by sharing a hilarious one about accidents at work.

Gemma, 36, posted a mocked up poster for the “National Accident Helpline” with a picture of her holding the mic in the air shortly before she fell.

It was captioned “Have you had an accident at work?” and even included a phone number as she poked fun at adverts by lawyers who chase claims for workplace injuries.

Taking to Twitter, Gemma shared a clip of the already famous moment and wrote: “Madonna done it and I done it when I tell you I’m Bridget Jones in an Essex girl it’s finally confirmed best and worse moment for me “.

Another hilarious meme saw a clip of Gemma’s fall with the caption: “Me: I’m not falling for him again. Also Me:”

Her fans were glad she was OK but many were delighted that they have new content for memes about the GC.

One wrote: “I swear Gemma Collins is the gift that keeps on giving, she’s literally a living meme “.

Another added: “When we thought the Gemma Collins phase was over, she stacks it on stage and reclaims her meme queen status”.

Despite admitting she was “agony” after the fall, Gemma said it was all “worth it” as she nabbed a selfie with pop star Rita Ora.