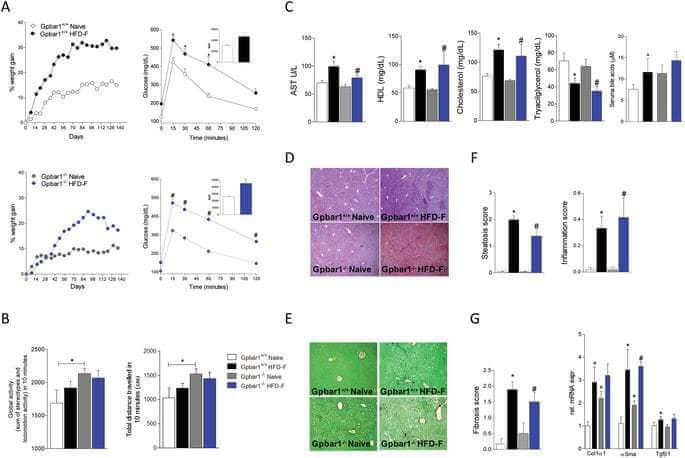 Gpbar1 is a bile acid activated receptor for secondary bile acids. Here we have investigated the mechanistic role of Gpbar1 in the regulation of adipose tissues functionality in a murine model of steatohepatitis (NASH). Feeding wild type and Gpbar1−/− mice with a high fat diet-fructose (HFD-F) lead to development of NASH-like features. Treating HFD-F mice with 6β-ethyl-3a,7b-dihydroxy-5b-cholan-24-ol (BAR501), a selective Gpbar1-ligand, reversed insulin resistance and histologic features of NASH, increased the weight of epWAT and BAT functionality and promoted energy expenditure and the browning of epWAT as assessed by measuring expression of Ucp1 and Pgc-1α. The beneficial effects of BAR501 were lost in Gpbar1−/− mice. In vitro, BAR501 promoted the browning of 3T3-L1 cells a pre-adipocyte cell line and recruitment of CREB to the promoter of Pgc-1α. In conclusion, Gpbar1 agonism ameliorates liver histology in a rodent model of NASH and promotes the browning of white adipose tissue.

Non-alcoholic fatty liver disease (NAFLD) is the most common cause of chronic liver disease in the Western countries and a leading cause of liver-related morbidity and mortality worldwide1,2,3. NAFLD is broadly categorized into two phenotypes: non-alcoholic fatty liver (NAFL) which is characterized by isolated steatosis, and non-alcoholic steatohepatitis (NASH), which features hepatocytes ballooning, inflammatory cell infiltration and parenchimal fibrosis, that carry on a substantial risk to progress to cirrhosis and hepatocellular carcinoma, and is expected to surpass hepatitis C virus infection as the leading cause of liver transplantation, in the next decade3. Despite NASH represents a significant burden for public health systems worldwide, there are no approved drugs designed to treat this condition and, therefore, there is an urgent need to develop novel approaches specifically tailored to treat NASH patients.

Bile acids, the end products of cholesterol metabolism, are signaling molecules that activate both cell surface and nuclear receptors4. Gpbar1 (also known as TGR5 or MBAR) is a G protein-coupled receptor activated by secondary bile acids5, highly expressed in entero-hepatic tissues, pancreatic β cells, skeletal muscles and white and brown adipocytes (WAT and BAT). In these tissues Gpbar1 functions as a nutrient sensor by exerting genomic and non-genomic effects4. Non-genomic effects are mediated by changes in intracellular concentrations of cyclic-AMP (cAMP), leading to rapid phosphorylation of downstream kinases; while the recruitment of a phosphorylated cAMP-response element binding protein (pCREB) to a cAMP responsive element (CRE) in the promoter of target genes, mediates the transcriptional (genomic) effects of the receptor6. Gpbar1 is thought to regulate energy expenditure and glucose homeostasis7, but since Gpbar1−/− mice had a normal span life and fail to develop overt metabolic abnormalities with age8, the role of the receptor remains poorly defined. Furthermore the liver parenchimal cells, hepatocytes5, lack Gpbar1, indicating that the effects exerted by this receptor on liver metabolism are indirect.

The 6β-ethyl-3a,7b-dihydroxy-5b-cholan-24-ol (BAR501), is a non-bile acid, steroidal Gpbar1 ligand9,10 that activates the receptor with an EC50 of ≈2 µM, in transactivation assay in transfected cells and that directly increases the release of glucagon-like peptide (GLP)-1 from intestinal endocrine cells9.

In the present study we have investigated the metabolic effect of BAR501 in a model of NASH, induced by feeding wild type and Gpbar1−/− mice a high fat diet and fructose (HFD-F). In this model11,12, BAR501 effectively protected against liver damage by resetting the partition of lipid between liver and adipose tissues. Mechanistically we found that Gpbar1 activation increased the thermogenic functionality of BAT and promoted the browning of epididymal (ep)WAT as indicated by the increased expression of uncoupling protein Ucp1 (a protein found in the inner mitochondrial membrane), peroxisome proliferator-activated receptor (Ppar)- α and Pparγ coactivator 1 (Pgc-1)α, in the epWAT12. Furthermore, Gpbar1 activation by BAR501 in 3T3-L1 cells, a pre-adipocyte cell line, promoted the differentiation toward a brown phenotype as indicated by increased expression of Ucp1 and Pgc-1α. Finally, we provide evidence that regulation of Pgc-1α by BAR501 involves the binding of a CRE located in the promoter of this gene. Taken together, these results demonstrate that Gpbar1 agonism modulates WAT and BAT metabolism by genomic and non-genomic effects.

BAR501 (6β-ethyl-3a,7b-dihydroxy-5b-cholan-24-ol) was synthesized as described elsewhere9. The dose used in this study was chosen according to a previously published study10.

Twenty-four weeks old male Gpbar1−/− mice8,13,14 on a C57BL6/Sj background and their congenic littermates were fed a high fat diet (HFD) containing 60% kj fat (ssniff ® EF acc. D12492 (I) mod.) and fructose (HFD-F) in drinking water (42 g/l) or normal chow diet (6 mice) for 18 weeks12. Food intake was estimated as the difference of weight between the offered and the remnant amount of food at 7-days intervals. The food was provided as pressed pellets and the residual spillage was not considered. After 9 weeks, HFD-F mice were randomized to receive HFD-F alone (9 mice) or in combination with BAR501, 15 mg/kg/day, by gavage (9 mice) for 9 weeks. Mice were housed under controlled temperature (22 °C) and photoperiods (12:12-hour light/dark cycle), allowed unrestricted access to standard mouse chow and tap water. The experimental protocol was approved by the Animal Care and Use Committee of the University of Perugia and by the Italian Minister of Health and Istituto Superiore di Sanità (Italy) and were in agreement with the European guidelines for use of experimental animals (permission n. 41/2014-B). The general health of the animals was monitored daily by the Veterinarian in the animal facility. At the day of sacrifice, fed mice were deeply anesthetized with a mixture of tiletamine hypochloride and zolazepam hypochloride/xylazine at a dose of 50/5 mg/Kg and sacrificed before 12 AM.

BAT temperature was recorded through the study using a non-invasive technology. Briefly, mice were maintained at 25 °C and the thermal images were taken by a FLIR E6 thermal imaging camera (FLIR System, Wilsonville, Oregon) and the surface temperature quantified by the FLIR Tools15.

Immunohistochemistry on epWAT and on BAT (used as positive control) were performed using formalin-fixed paraffin-embedded sections (7 μm thick) as described previously12. Sections were stained with an anti-Ucp1 (Abcam 1:500) antibody and counterstained with hematoxylin.

Total RNA was extracted from…