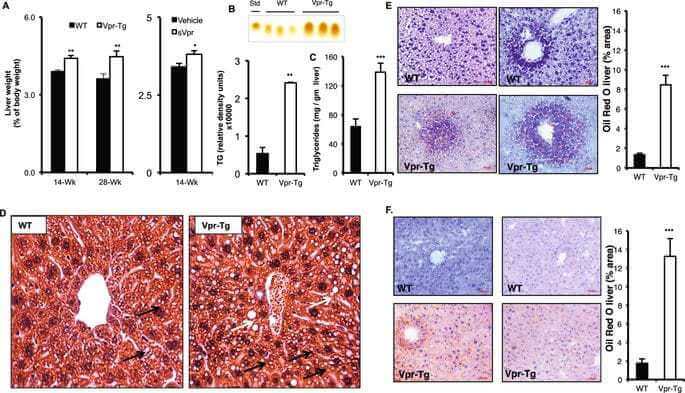 The high prevalence of hepatic steatosis in HIV-1-positive patients1,2,3 is commonly ascribed to coinfection with hepatitis C virus (HCV) or adverse effects of antiretroviral (ART) drugs, especially dideoxynucleoside analogues4,5. However, recent papers indicate that 30–70% of HIV-positive patients have non-alcoholic fatty liver disease (NAFLD) without hepatitis C co-infection2,3,4,6,7,8. While these reports do not distinguish the effects of ART from those of the virus per se on the development of hepatic steatosis, they suggest that a factor intrinsic to HIV-1 could play an etiologic role. Identifying mechanisms whereby HIV-1 causes NAFLD would provide novel insights into a viral etiology of this complex condition.

Viral protein R (Vpr), an HIV-1 accessory protein, permits efficient virion assembly, nuclear translocation of the preintegration complex, nucleocytoplasmic shuttling, apoptosis and transcription of the HIV-1 long terminal repeat and host cell genes9. Vpr is produced by HIV-1 even following inhibition of viral replication by protease inhibitors10, can transduce cells in a receptor- and energy-independent manner, and localize in the nucleus and mitochondria11. We demonstrated in two mouse models (one expressing the Vpr transgene in liver and adipose tissue, the other with chronic infusion of synthetic Vpr) that this protein is a promiscuous coregulator of transcription factors for host genes that modulate energy metabolism, e.g., coactivating the glucocorticoid receptor (GR) and corepressing peroxisome proliferator activated receptor-γ (PPARγ) and PPARα12. These transcriptional effects cause lipid kinetic, biochemical and histologic abnormalities that recapitulate HIV-associated lipodystrophy syndrome13. We also showed that virion-free Vpr in plasma is sufficient to cause these effects because it transduces adipocytes and hepatocytes in the absence of intact HIV-1 and persists in the circulation of HIV patients receiving “viral-suppressive” ART12.

Our previous studies were focused on the effects of Vpr on adipose function, but we observed that both mouse models also develop hepatic steatosis without high fat consumption12. Increased hepatic fatty acid flux from accelerated lipolysis, as we previously reported, could contribute to this phenotype. In the present study, we investigated comprehensively the mechanisms whereby Vpr induces fatty liver in these mice. We found that Vpr transgenic (Vpr-Tg) mice exhibit the following hepatic defects: increased de novo lipogenesis (DNL), decreased fatty acid oxidation and blunted very low density lipoprotein-triglyceride (VLDL-TG) export. The molecular mechanisms extend beyond the previously demonstrated Vpr-mediated coregulation of GR, PPARγ and PPARα to include coactivation of liver X receptor-α (LXRα), a master regulator of DNL. In conjunction with our earlier demonstration that Vpr circulates in the blood of HIV patients on ART, including those without detectable plasma viral load, they support the concept that Vpr may be a causal agent in the development of a unique form of NAFLD.