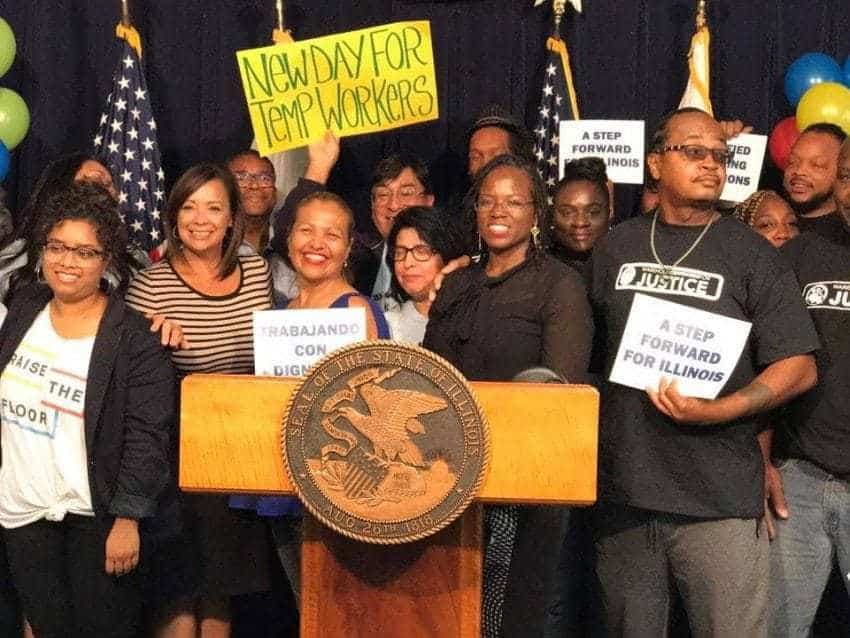 Beginning next summer, a sweeping new law will take effect in Illinois, ending many of the routine injustices suffered by the state’s nearly 850,000 temp employees who often work under miserable conditions.

The Responsible Job Creation Act, or HB690, represents the most ambitious attempt to date by any state to regulate the growing temporary staffing industry. Introduced in January, the bill gained bipartisan support in the Illinois General Assembly and was signed into law by Republican Gov. Bruce Rauner in late September. The law will take effect June 1, 2018.

The legislation, which addresses job insecurity, hiring discrimination and workplace safety, was championed by the Chicago Workers’ Collaborative (CWC) and Warehouse Workers for Justice (WWJ), as well as the Illinois AFL-CIO and Raise the Floor Alliance, a coalition of eight Chicago worker centers.

The law will require staffing agencies to make an effort to place temp workers into permanent positions as they become available—a step forward in the fight to end “perma-temping.” To address racial bias in hiring, the new law requires temporary staffing agencies record and report the race and gender of all job applicants to the Illinois Department of Labor. And in an effort to reduce the workplace injuries that temps frequently suffer, agencies will also now have to notify workers about the kinds of equipment, training and protective clothing required to perform a job.

State Rep. Carol Ammons—a Democrat from Champaign-Urbana who supported Bernie Sanders’ presidential campaign—was the bill’s chief sponsor. Activists credit her with getting the bill to the governor’s desk.

“Legislators don’t always get down into…