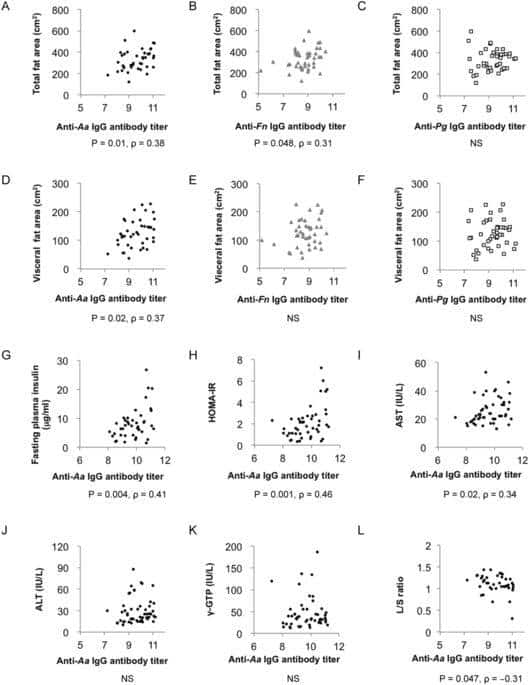 Non-alcoholic fatty liver disease (NAFLD) is the most common chronic liver disease. NAFLD includes a wide spectrum of conditions ranging from non-alcoholic fatty liver (NAFL) to non-alcoholic steatohepatitis (NASH). Generally, NAFL shows a non-progressive clinical course, whereas NASH is a more serious form of NAFLD and can progress to cirrhosis or hepatocellular carcinoma1,2. Many risk factors related to the development of NAFLD have been proposed, such as obesity, diabetes, and insulin resistance3,4.

Periodontal disease is an inflammatory disorder caused by pathogenic oral microorganisms that can lead to the destruction of alveolar bone and connective tissues around the teeth5,6. Periodontal bacteria present in dental plaque possess various virulence factors, such as lipopolysaccharide (LPS), fimbriae, and enzymes, which can trigger inflammation in periodontal tissues7. Considering that the bacterial flora of the oral cavity differs from that of the gut8, there is a possibility that swallowed bacteria could affect the composition of gut microbiome.

Given the infectious nature of periodontal disease, patients with the disease show elevated IgG antibody titers against periodontopathic bacteria. These antibody titers correlate with severity of periodontal disease9. Periodontal infection has long been associated with an increased risk of various diseases, such as atherosclerotic vascular disease10 or type 2 diabetes11. Recently, several studies have indicated that periodontitis might influence NAFLD12,13. In addition, gut microbiota appear to mediate development and progression of NAFLD14,15,