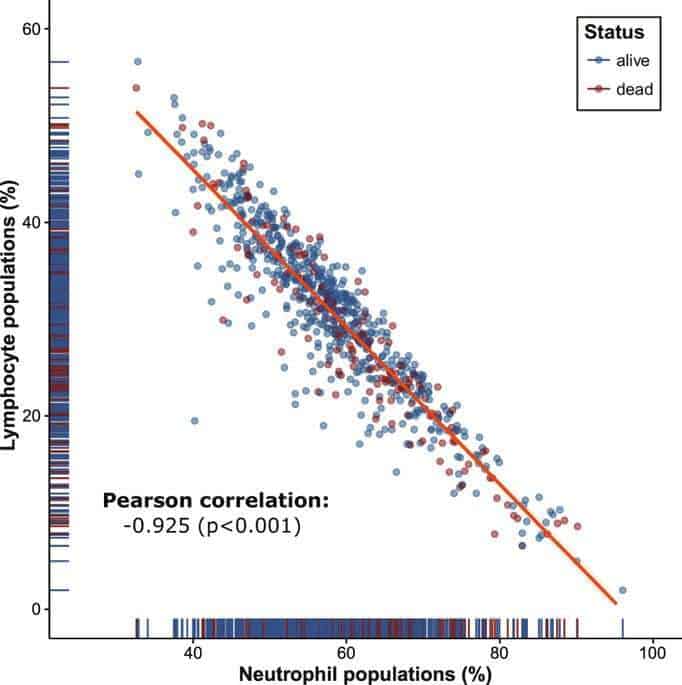 Postoperative neutrophil-to-lymphocyte ratio change (NLRc) reflects the dynamic change of balance between host inflammatory response and immune response after treatment. In gastric cancer, an elevated initial NLR (iNLR) is reported to be a prognostic predictor, but the clinical application of the NLRc remains unclear. The NLRc was assessed in 734 patients undergoing total/subtotal gastrectomy and endoscopic submucosal dissection for gastric adenocarcinoma. The iNLR and NLRc were recorded within 10 days of the first diagnosis and 3–6 months after surgery, respectively. Using receiver operating characteristic (ROC) curves, we investigated the relationship between NLRc or iNLR and patient survival. The analysis revealed a higher predictive power for correlating patient survival with the NLRc compared with iNLR. NLRc was defined as negative (lower than iNLR) and positive (higher than iNLR). A positive NLRc was frequently observed in patients with advanced AJCC stage, local recurrence, distant metastasis, perineural invasion, and adjuvant chemotherapy (all p < 0.05). Univariate and multivariate analyses revealed a significant relationship between patient survival and NLRc (all p < 0.05) but no association between survival and iNLR. The NLRc could be a better indicator than iNLR for predicting survival in patients with gastric cancer.

Gastric cancer is a complex, heterogeneous disease with a global variation in its aetiology, incidence, natural course, and management. The tumourigenic conditions of gastric cancers are associated with infectious agents (Helicobacter pylori or Epstein-Barr virus)1,2, lecular subset (CDH1 mutation)3, and different levels of susceptibility and aggressiveness of the tumours. The clinical factors for determining a treatment plan are location of the primary tumour (proximal and distal), subtypes of adenocarcinoma (diffuse, intestinal, or mixed)4, tumour susceptibility based on ethnicity, and predictive biomarkers (HER2)5. Generally, the following prognostic indicators are considered in clinical management: American joint Committee on Cancer (AJCC) stage and size, histological type and grade, and lymphovascular and perineural invasion. A study by the Cancer Genome Atlas Research Network indicated that gastric cancers can be classified into four subtypes based on molecular characteristics: Epstein-Barr virus positivity, microsatellite instability, genomic stability, and chromosomal instability6. However, these molecular analyses might be limited in general hospitals that lack facilities. Moreover, molecular markers are expensive and often time-consuming to measure. When there are sufficient technologists with an appropriate laboratory setting, genetic analyses to determine the new subtypes can be easily used in clinical application.

Systemic inflammation is associated with the progression of various cancers by induction of angiogenesis, metastasis and malignant cell proliferation, and alteration of the response to systemic therapy7. Neutrophils are known to be key mediators of tumour inflammation8 and angiogenesis9. Lymphocytes have been suggested to play vital roles in cytotoxic tumour cell death linked to tumour-infiltrating lymphocytes, especially T lymphocytes10. The interaction between the cancer and immune system might also extend beyond the local tissue environment. Other systemic inflammatory markers such as C-reactive protein and interleukin-6, have been associated with worse survival in patients with gastric cancer11. The imbalance between neutrophils and lymphocytes is thought to be secondary to tumour hypoxia or necrosis and associated with anti-apoptotic effects. Published data demonstrated that the initial neutrophil-to-lymphocyte ratio (iNLR) at that time of first diagnosis is linked to prognosis of different types of cancer12,13,14,15 as well as of other conditions such as cardiovascular disease16 and bacterial infection17. Accordingly, the iNLR might represent the balance between pro-tumour inflammatory status and anti-tumour immune status.

Several studies focused primarily on iNLR, while the dynamic change of neutrophil-to-lymphocyte ratio after treatment was not considered. The postoperative neutrophil-to-lymphocyte ratio change (NLRc) might be a meaningful factor to assess prognosis after treatment, because there has been a change in the treatment approach including tumour removal and chemotherapy. However, although the NLRc might dynamically reflect the alteration of balance between host inflammatory response and immune response against cancer after treatment, its significance is largely unclear.

The aim of this study was to investigate the relationships between iNLR and NLRc and clinicopathological parameters, and to evaluate the prognostic value of the NLRc in patients with gastric cancer.