Rise of the machines: More robots on assembly lines; workers worry they will threaten jobs 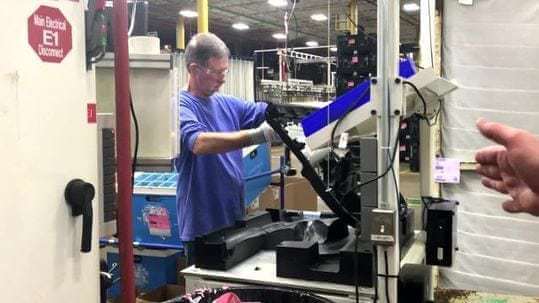 That’s what engineering manager Tom Borro told every worker at an auto supplier factory to do when the first of six “collaborative” robots arrived last year. The idea, he said, was to make assembly line employees comfortable with their newest, mechanical colleagues known colloquially as co-bots.

The Universal UR10 robot’s task is both simple and repetitive: pick up flimsy insulation pads known as shoddy; transfer them to a machine to be inserted into a door panel; then move the panel to a human worker for inspection.

It’s no Terminator. Bolted to the floor with a single, swinging arm, the UR10 stands less than 6 feet tall and can lift only up to 22 pounds.

“I think people were scared to get close to it,” says 67-year-old Phyllis Aslinger, an inspector on the line assembling door panels at the International Automotive Components‘ plant about halfway between Toledo and Cleveland on Lake Erie for nearly 28 years. A robot replaced her coworker, she says, “but I’m not afraid” of being rapped or rousted by the co-bot.

Aslinger is hardly alone. Robots are descending on industrial workplaces in record numbers.

North American robotics companies posted the strongest ever first-quarter results earlier this year, according to the Robotic Industries Association, the industry’s trade group. The Ann Arbor-based trade association estimates that 250,000 robots are now in use in the U.S., the third highest in the world behind Japan and China. Online superstore Amazon, for example, reportedly has more than 125,000 full-time workers in its U.S. fulfillment center network — and 100,000 robots worldwide.

More robots are taking their place directly next to human workers. Barclays Equity Research analysts calculate that global sales of co-bots — un-sequestered robots that work within inches of humans — alone reached approximately $120 million in 2015. They expect the market to explode to $3.1 billion in sales by 2020 and $12 billion by 2025.

Across the U.S. landscape, industrial robots are landing unevenly. So far, Detroit has been the biggest target.

Metro Detroit has more more than 15,000 industrial robots in place or 8½ for every 1,000 workers, according to a Brookings Institution study published this summer. That’s almost five times the number of any other major U.S. city.

Michigan plus Ohio are home for one of every five industrial robots in the U.S. More than half of the nation’s 233,305 industrial robots are welding, painting, assembling, handling or packaging in just 10 auto-centric states in the Midwest and South, according to Brookings.

The rise of robots is a “mixed development. It clearly prompts anxiety among workers but also delivers competitiveness and productivity for companies,” said Mark Muro, a Brookings senior fellow who authored the report. The immediate future, he said in an interview, is likely to be a combination of human workers amid automation and not a “lights out” factory devoid of people entirely.