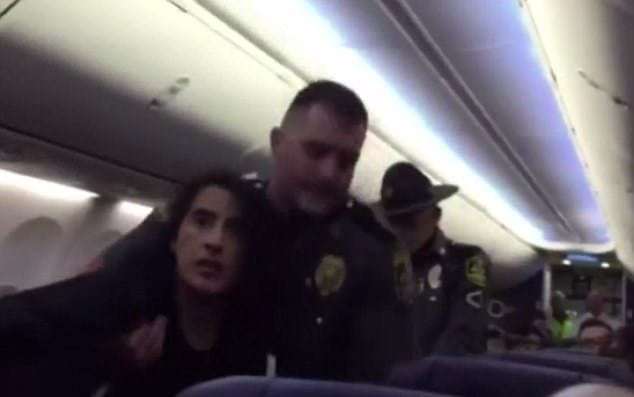 A woman was removed from a Southwest Airlines flight after she complained about ‘life-threatening allergies’ to a passenger’s support dog.

Video of the unidentified passenger shows her refusing to leave the plane on her own, prompting officers to pull and push her down the aisle.

Flight 1525 was preparing to leave from Baltimore to head to Los Angeles on Tuesday night when the incident occurred.

The incident was recorded by Bill Dumas, and in the video the woman can be heard demanding the officers to let her go.

At the start of the video, the woman apologizes and says that her father is having surgery as the officers mover her forward.

‘What are you doing?’ she asks the officers as other passengers are heard telling the woman to leave the plane peacefully.

The woman then tells the officers that she ‘needs to close’ her pants. But she accuses one officer of ‘ripping’ them as he tried to escort her off the plane.

In the video, one officer is then seen grabbing the woman and pulling her away from her seat.