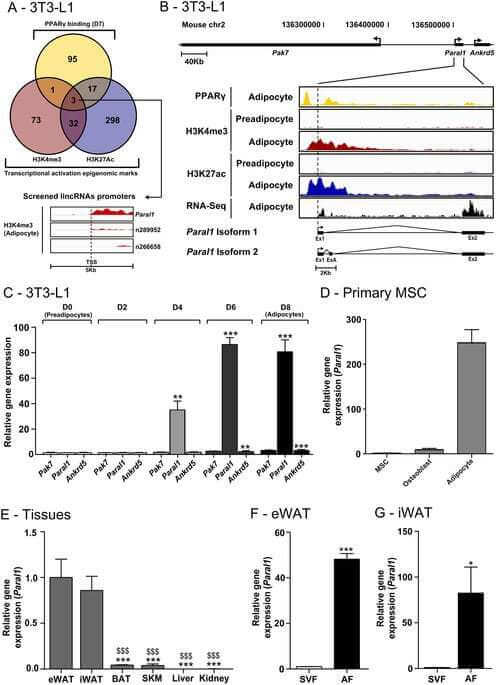 Adipocyte differentiation and function relies on a network of transcription factors, which is disrupted in obesity-associated low grade, chronic inflammation leading to adipose tissue dysfunction. In this context, there is a need for a thorough understanding of the transcriptional regulatory network involved in adipose tissue pathophysiology. Recent advances in the functional annotation of the genome has highlighted the role of non-coding RNAs in cellular differentiation processes in coordination with transcription factors. Using an unbiased genome-wide approach, we identified and characterized a novel long intergenic non-coding RNA (lincRNA) strongly induced during adipocyte differentiation. This lincRNA favors adipocyte differentiation and coactivates the master adipogenic regulator peroxisome proliferator-activated receptor gamma (PPARγ) through interaction with the paraspeckle component and hnRNP-like RNA binding protein 14 (RBM14/NCoAA), and was therefore called PPARγ-activator RBM14-associated lncRNA (Paral1). Paral1 expression is restricted to adipocytes and decreased in humans with increasing body mass index. A decreased expression was also observed in diet-induced or genetic mouse models of obesity and this down-regulation was mimicked in vitro by TNF treatment. In conclusion, we have identified a novel component of the adipogenic transcriptional regulatory network defining the lincRNA Paral1 as an obesity-sensitive regulator of adipocyte differentiation and function.

White adipose tissue (WAT) is a dynamic organ responding to dietary intakes by a rapid morphological remodeling whose kinetics depends on WAT localization within the body1. Expanding WAT mass stores energy in periods of plenty and is a safeguard against lipid accumulation in peripheral tissues, a major contributor to insulin resistance and associated co-morbidities such as type 2 diabetes (T2D)2. Indeed, increased fat deposition in WAT may be protective and metabolic health thus relies in part on WAT expandability, which depends on WAT hyperplasia and adipocyte hypertrophy3. In the context of obesity, hypertrophied adipocytes are prone to cell death4, hence triggering macrophage infiltration and TNF-induced PPARγ downregulation among other processes5. Furthermore, adipocyte size positively correlates with insulin resistance and T2D and is thus pathologically meaningful6. In contrast, WAT hyperplasia is metabolically more beneficial than hypertrophy7.

De novo adipogenesis, leading to WAT hyperplasia, is thus required for WAT to cope with a positive energy balance. Adipogenesis is a highly complex mechanism relying on the sequential activation or repression of transcriptional regulators leading to a mature lipid-storing adipocyte phenotype. The core of the terminal differentiation signaling pathway is constituted by the transcription factor CCAATT enhancer-binding protein β (C/EBPβ) which regulates the expression of PPARγ8 and of C/EBPα9. The coordinated interplay of these 2 transcription factors triggers complex epigenomic remodeling to achieve adipocyte maturation8,10,11,12.

Pervasive transcriptional events throughout the genome generate numerous RNA transcripts without protein coding potential [non-coding (nc) RNAs] and covering ~60% of the genome. Among those, long non-coding RNAs (lncRNAs, > 200 nt) play a role in diverse biological processes such as cellular differentiation13,14. LncRNAs are expressed in a highly tissue-specific manner and display a wide array of functions in the cytoplasm and/or the nucleus often related to transcriptional and post-transcriptional gene regulation, as well as to organization of chromosome and nucleus topology15,16. Considering their generally low abundance and cell-specific expression, lncRNAs have also been proposed to be mere by-products of transcription which is a nuclear structure-regulatory event per se17.

Several lncRNAs (Neat1, Adinr and lnc-U90926) interfere with terminal adipocyte differentiation by modulating PPARγ or C/EBPα expression18,19,20. The exact molecular mechanisms involved in lncRNA-mediated control of adipogenesis remain however poorly defined. As no investigation of their possible contribution to WAT physiopathology has been reported, a case-by-case investigation remains necessary to decipher the mechanism of action of lncRNAs.