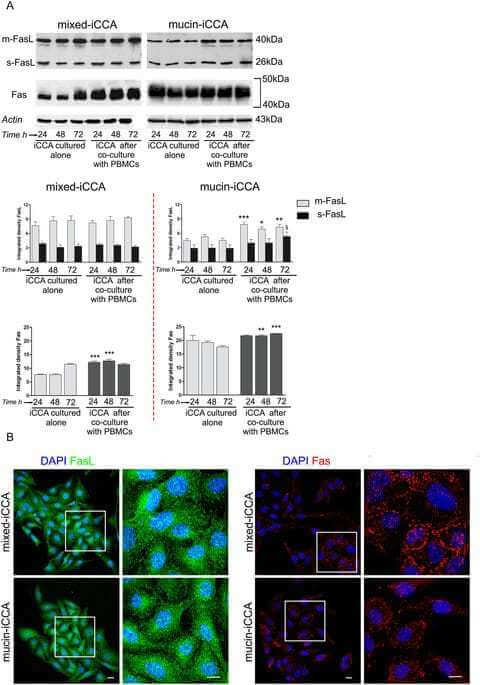 Intrahepatic cholangiocarcinoma (iCCA) represents a heterogeneous group of malignancies emerging from the biliary tree, often in the context of chronic bile ducts inflammation. The immunological features of iCCA cells and their capability to control the lymphocytes response have not yet been investigated. The aims of the present study were to evaluate the interaction between iCCA cells and human peripheral blood mononuclear cells (PBMCs) and the role of Fas/FasL in modulating T-cells and NK-cells response after direct co-culture. iCCA cells express high levels of Fas and FasL that increase after co-culture with PBMCs inducing apoptosis in CD4+, CD8+ T-cells and in CD56+ NK-cells. In vitro, c-FLIP is expressed in iCCA cells and the co-culture with PBMCs induces an increase of c-FLIP in both iCCA cells and biliary tree stem cells. This c-FLIP increase does not trigger the caspase cascade, thus hindering apoptotis of iCCA cells which, instead, underwent proliferation. The increased expression of Fas, FasL and c-FLIP is confirmed in situ, in human CCA and in primary sclerosing cholangitis. In conclusion our data indicated that iCCA cells have immune-modulatory properties by which they induce apoptosis of T and NK cells, via Fas/FasL pathway, and escape inflammatory response by up-regulating c-FLIP system.

Cholangiocarcinoma (CCA) comprises a heterogeneous group of malignancies emerging at any portion of the biliary tree, representing the second most frequent type of primary liver cancer1. On the basis of anatomical location, CCA is currently classified into intrahepatic (i), perihilar (p), and distal (d)2. Typical features of iCCAs are the high inter- and intra-tumour heterogeneities and the high representation of cancer stem cell (CSC) and cells expressing epithelial/mesenchymal transition (EMT) traits3,4. Moreover, iCCA is characterized by a prominent desmoplastic stroma composed of cancer-associated fibroblasts, inflammatory cells and vascular cells5,6.

iCCA arises in the context of bile duct inflammation7. From a histological point of view, iCCA could be categorized as a pure mucin adenocarcinoma (mucin-iCCA) or as a mixed-iCCA form with areas of hepatocytic differentiation and of neoplastic ductular proliferation. At a molecular level, integrative molecular analysis identified two different biological subtypes of iCCA, namely the proliferation and inflammation classes8. The latter is characterized by the activation of inflammatory pathways and overexpression of different cytokines. Recently, the interactions between tumor macrophages and tumor cells including cancer stem cells (CSCs) have been revealed6,9; however, almost nothing is known regarding the interaction between lymphocytes and CCA cells. To this regard, the immunological features of human CCA cells and their capability to control the immune-response have not yet been investigated. We have recently described specific immune-modulatory properties of normal stem cell populations isolated from adult biliary tree that are able to induce a Fas/FasL mediated CD4+ and CD8+ T-cells apoptosis10.

With this background, the aims of the present study were to investigate: (i) the expression of Fas and FasL in primary cultures isolated from human iCCA; (ii) the in vitro interactions between CCA cells and human PBMCs and the role of Fas/FasL in inducing T-cells and NK cells apoptosis; (iii) in situ the expression of Fas and FasL in human iCCA and their relationship with typical markers of CSC.