Carrie Schwartz: Nurse, EMT and a helper from the start 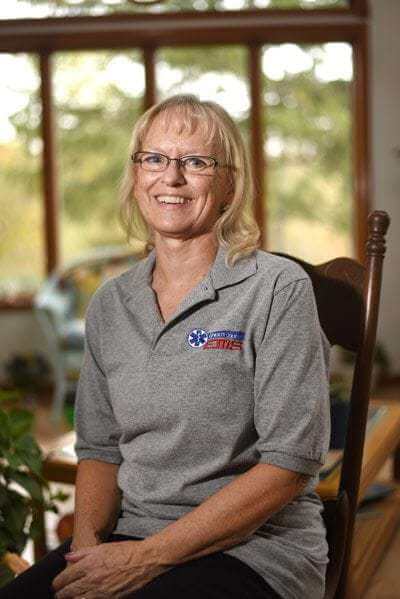 MONROE – There are people who spend their lives never really figuring out what they want to do for a career.

And then there’s Carrie Schwartz.

She has never hesitated after deciding as a child to become a nurse and then shortly after became a driving force in the Monroe EMS. She has now spent most of her life caring for others. With more than four decades of experience, she’s seemingly always ready for whatever a call might bring to help out in her hometown.

Schwartz was born in Monroe and grew up in town as the daughter of Joanne and Bill Gyure. Like so many, she recalls running around the neighborhood with friends and siblings. She lived by the old East School and attended there until sixth grade with a younger sister and grandparents in town – which made the entire community feel like home.

She could often be found riding her bike to the swimming pool and attended Cheese Days regularly. Schwartz recalls family summer vacations in Minocqua where she created lasting memories. She was involved in scouting, becoming a Girl Scout First Class, another enjoyable experience.

Her father ran a business in town he purchased from her grandfather, Solomon Auto Parts, and Schwartz spent time there, often working voluntarily. She said as her father’s oldest daughter, she knew how to do it all. The self-proclaimed tomboy could change a tire, her own oil and drive a stick shift.

In high school, Schwartz said she was an involved but average student. She was in choir and helped out behind the scenes in the school plays. She earned the Citizenship Award, an achievement given from teacher nominations.

Schwartz was always drawn toward involvement throughout her life. She knew she wanted to become a nurse one day, and volunteered as a candy striper at the hospital in Monroe, directed by nuns. She also earned her Lifesaving and First Aid Certifications. She didn’t really need them, but she said the topics, for some reason, drew her in.

“I was interested in nursing, even then,” Schwartz said.

After her graduation from Monroe High School in 1971, Schwartz followed in her father’s footsteps and headed for the University of Wisconsin-Madison. Her career path was never questioned.

“I guess I was one of the lucky ones,” she said. “I just always knew what I wanted to do.”

She said UW-Madison was an eye-opening experience for her during a time when riots and marches were in full-swing. She spent her college years volunteering for Central County, a place for mentally disabled individuals. She worked with grade-school-aged children.

“I wanted to try it, and I enjoyed it,” she said. “I learned a lot about caring for kids who couldn’t care for themselves.”

She finished college in May 1975 with her bachelor’s degree in nursing and was soon married to her husband, Randy, also a Monroe native. Although she hadn’t planned to return to her hometown, Randy was settled in a job. She started working at St. Clare Hospital in June 1975 on the surgical floor.

She said it was a job she loved immediately.

As a nurse for 37 years, Schwartz saw many changes at the hospital, clinic and in the profession. But her dedication to caring for others never waned. She eventually made her move to her dream job – a nurse in the emergency room.

The same year she was married and started her career in nursing, Schwartz also started with the EMS. It was new in Monroe, and many she knew from the hospital were getting on board. She said it was also a benefit for her while she worked on the surgical floor to keep up with her medical knowledge.