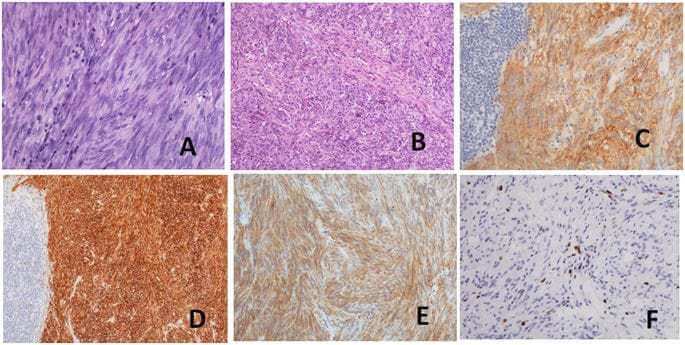 Gastrointestinal stromal tumor (GIST) is the most common mesenchymal tumor of the gastrointestinal tract, and because of its CD117 positive phenotype, it probably originates from Cajal cells1,2,3. GIST usually occurs in older individuals with a median age of 60–65 years with no difference between men and women. GIST is common in the stomach1,2,3. Benign cases of GIST are more frequent than malignant cases. However, the small GIST can be found occasionally4,5.

GIST can occur in any area of the stomach but predominantly at the outside of the gastric lumen or the lining of the stomach, as well as being attached to the lining of the stomach4,5. The size of GISTs varies from case to case. Tumor cells have a wide morphological spectrum, although most are fusiform; 20–25% of GIST cases have both fusiform and epithelial tissue types, and some cases show mixed histological appearance. Most GISTs are positive for c-kit (CD117) with strong expression of CD34 and Dog1 and weak expression of smooth muscle actin. Only a few cases of GIST express actin, CK18 or S-1004,5,6.

The gene homology of PDGFR-α and c-kit is high. The c-kit is located on chromosome 4q12-13, as a proto-oncogene and its product is type III tyrosine kinase. Expression of c-kit (a proto-oncogene receptor) can combine with somatic cell factor and stimulate the phosphorylated tyrosine residue that regulates cell growth and tumor proliferation, malignant evolution, and apoptosis.

PDGFR-α gene encodes a single transmembrane glycoprotein that is involved in mitosis and other signal transmission into the nucleus, thus causing cell division and proliferation. Mutations of PDGFR-α can lead to malignancy. The c-kit or PDGFR-α mutations cause functional changes and are thought to be major molecular mechanisms of GIST.

Gastric cancer accounts for ~7.8% of all types of cancer. More than 700,000 individuals die from stomach cancer each year, and it is ranked as the second most frequent cause of cancer mortality worldwide. About 974,000 new cases of gastric cancer are diagnosed annually, which makes it the fourth most common malignant tumor worldwide. Gastric cancer occurs mainly in elderly people and rarely in those under the age of 30 years. Gastric cancer is associated with multiple factors including smoking, diet, bile reflux, and Helicobacter pylori infection. The WHO classifies gastric cancer histologically as tubular, papillary, myxoid, low adhesion carcinoma (including signet ring cell carcinoma), and mixed carcinoma.

Although mixed adenocarcinoma with other tumors in the stomach is rare several cases have been reported previously, in which synchronous tumors of the stomach consist of adenocarcinoma mixed with gastric lymphoma7,8,9,10, as well as with a carcinoid tumor9,11,12. However, gastric synchronous tumor consisting of adenocarcinoma with GIST is rare. Ruka et al.13 found that about 10% of their GIST patients were an associated non-GIST neoplasm, like carcinoma. Furthermore, Maiorana et al.14 reported that among 52 patients with gastric GIST, six (11.5%) were an associated, second gastric tumor (five adenocarcinomas and one carcinoid tumor).

To date, most of the publications about GISTs have been single case reports. Here, we present six patients with synchronous gastric adenocarcinoma with GIST. The aim of this study was to evaluate the clinicopathological and molecular oncogenesis characteristics of GIST occurring concomitantly with gastric adenocarcinoma.

We included five male and one female patients with a median age at presentation of 61.3 years (range, 47–71 years) in this study. The common clinical manifestations were abdominal discomfort (n = 3), backache (n = 2) and difficulty eating (n = 1). Some patients had more than one of these symptoms. The median duration of disease was 1.5 months (range, 0.3–6 months). All six patients underwent preoperative gastroscopy, which revealed ulcerative lesions in four, an elevated lesion in the antrum and an erosive lesion in the cardia. One patient had a soft tissue lesion with a diameter of 1.5 cm in the lesser curvature, which was considered to be a GIST. All lesions were diagnosed as adenocarcinomas on biopsy examination. Computed tomography (CT) and chest images were available in all the six patients. Total (n = 2) and subtotal (n = 3) gastrectomy, and partial gastrectomy with partial oesophagectomy (n = 1) were performed.

The locations of adenocarcinoma in the stomach are shown in Table 1. The mean size of primary adenocarcinoma was 4.4 ± 2.0 cm (range, 2.0–7.5 cm). There were no distant metastases in any of the patients at the time of diagnosis. Three of them were low adhesion carcinoma, and the other three were moderately differentiated tubular adenocarcinomas.

Five of the GISTs were an incidental finding during surgery or gross pathological examination after surgery. Detailed clinicopathological data are shown in Tables 1 and 2. The mean GIST size was 1.0 ± 0.4 cm (range, 0.5-1.5 cm). Five of six GISTs were located in the submucosal layer and only one in the intramural layer. All GISTs were of the spindle cell type and were strongly and diffusely positive for Dog-1, CD34 and CD117 markers (Fig. 1). Four of six GISTs were also positive for vimentin (66.7%) and four of them for S-100. Additionally, Ki-67 index for the GISTs was <5% in all cases. And all cases had a low risk of recurrence.

Paraffin-embedded tissue specimens for all six synchronous adenocarcinomas with GISTs and GISTs alone were screened for mutations in c-kit and PDGFR-α. Two…