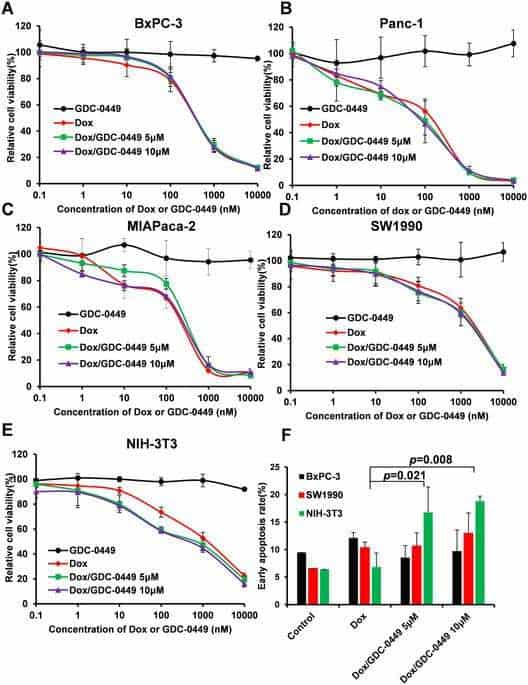 Pancreatic cancer is one of the most lethal human cancers that currently does not have effective therapies. Novel treatments including nanomedicines and combination therapies are thus urgently needed for these types of deadly diseases. A key feature of pancreatic cancer is its tumor protective dense stroma, which is generated by cancer-associated fibroblasts (CAFs). The interaction between CAFs and pancreatic cancer cells abnormally activates sonic hedgehog (SHH) signaling and facilitates tumor growth, metastasis, and drug resistance. Here, we report that the commercial SHH inhibitor GDC-0449 reverses fibroblast-induced resistance to doxorubicin in Smoothened (SMO)-positive pancreatic cancer cells by downregulating SHH signaling proteins. Importantly, the synergistic combination of GDC-0449 with PEG-PCL-Dox exhibited potent antitumor efficacy in a BxPC-3 tumor xenograft model, whereas single treatments did not significantly inhibit tumor growth. Our findings reveal a potential treatment strategy for fibroblast-enriched pancreatic cancer.

The enhanced permeability and retention (EPR) effect was first reported by Dr. Hiroshi Maeda in 1986, and its increased accumulation in tumor tissues and reduced system toxicity supports the benefits of nanodrugs over small molecules1,2. Since then, countless nanocarriers for cancer-targeted drug delivery have been developed in the past 30 years, and several are currently commercially available for cancer therapy. However, clinical feedback indicates that the improvements of nano-sized anticancer formulations are limited, particularly in terms of therapeutic efficacy3. In recent years, the roles of fibroblasts in the tumor microenvironment have been investigated, and growing evidence indicates that fibroblasts not only restrain drug sensitivity but also limit the penetration of drugs in tumors4. However, previous research studies on drug discovery have mainly focused on cancer cells, whereas investigations on the influence of stromal fibroblasts on drug response are limited5.

Pancreatic cancer is one of the most devastating human malignancies with a 5-year survival rate of <5%5,6,7. Novel combination therapies targeting different signaling pathways are thus needed to combat this lethal disease. Aberrant activation of the sonic hedgehog (SHH) signaling has been widely observed in pancreatic cancer8,9. As a mediator of tumorigenesis, paracrine SHH signaling plays an important role in the communication between tumor and activated fibroblasts10,11. SHH ligands secreted by tumor cells positively regulate signaling in the surrounding tumor stroma, whereas stroma fibroblast cells can also serve as a resource for SHH ligands, which then activate SHH signaling in tumor cells through an inverse paracrine way12. SHH ligands bind to the Patched protein, which thereby releases inhibition of transducer protein Smoothened (SMO) and then triggers GLI transcription factors, ultimately resulting in the induction of downstream target genes13. The downstream genes activated by GLI include the Gli1 and Patched genes that upregulate tumor cell growth, drug resistance, and epithelial-mesenchymal transition (EMT)14. Therefore, SHH blockade seems to be a promising approach in preventing metastasis, which simultaneously increases intratumoral drug concentrations in fibroblast-enriched pancreatic cancer4,15,16. GDC-0449 (vismodegib) is a commercial hedgehog inhibitor, and several combination therapies comprising GDC-0449 and chemotherapeutics are currently in clinical trials for pancreatic cancer (NCT01088815, NCT00878163).

Doxorubicin (Dox) is an anthracycline antibiotic and a first-line anti-neoplastic drug for the treatment of a wide variety of cancers17. The main side effect of Dox is cardiotoxicity, which can be drastically reduced by encapsulation in a polyethylene glycol (PEG)-coated liposome or by other nano-formulations18. However, Dox has low response rates in pancreatic cancer when used as a single agent because of acquired resistance19 and limited penetration19,20,21. In the present study, the potential therapeutic strategy of a combination of nano-sized PEG-PCL-Dox micelles and GDC-0449 was investigated in pancreatic cancer in vitro and in vivo. Co-culture models employing pancreatic cancer cell lines and fibroblasts provide a useful platform because of its fibroblast-enriched microenvironment, which allows the investigation of potential drug combinations.

To investigate fibroblast-induced drug resistance in the tumor microenvironment, we co-cultured tumor cells with NIH-3T3 fibroblasts directly or indirectly and evaluated the effect of Dox treatment with or without GDC-0449 (Fig. 2). In the transwell®-based indirect…