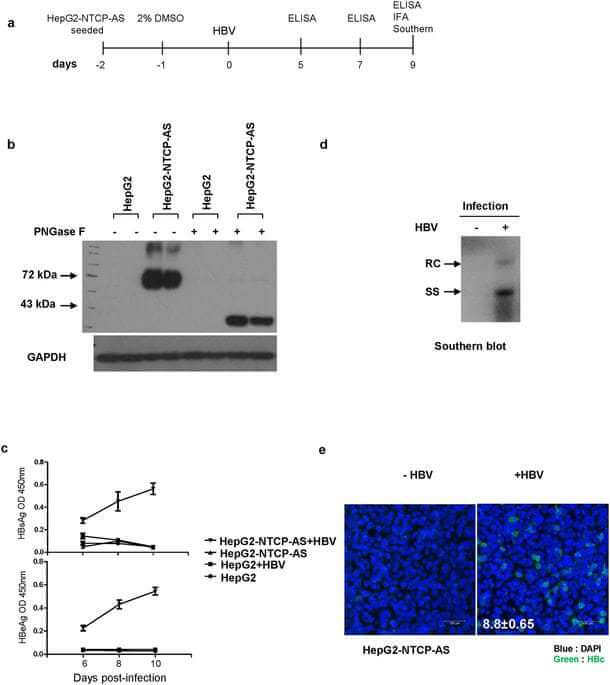 Hepatitis B virus (HBV) is a blood-borne pathogen responsible for chronic hepatitis, cirrhosis, and liver cancer. The mechanism of HBV entry into hepatocytes remains to be investigated. Recently, sodium taurocholate cotransporting polypeptide (NTCP) was discovered as a major HBV receptor based on an in vitro infection system using NTCP-reconstituted HepG2 cells. However, this infection system relies on the compound polyethylene glycol (4% PEG), which is not physiologically relevant to human infection. High concentration of heparin has been commonly used as an inhibitor control for in vitro infection in the field. Surprisingly, we found that heparin at physiological concentration can enhance HBV infection in a PreS1-peptide sensitive, NTCP-dependent manner in both HepaRG and HepG2-NTCP-AS cells. O-sulfation of heparin is more important for the infection enhancement than N-sulfation. This system based on the HepG2-NTCP-AS cells can support in vitro infection with HBV genotypes B and C, as well as using serum samples from HBeAg positive and negative chronic carriers. In summary, our study provides a PEG-free infection system closely resembling human natural infection. In addition, it points to a future research direction for heparin and heparin-binding host factor(s) in the blood, which are potentially involved in viral entry. To our knowledge, this is the first soluble and circulatory host factor which can enhance HBV in vitro infection.

HBV is an enveloped and partially double-stranded DNA virus which established chronic infection in around 240 million carriers worldwide. Current treatment for HBV cannot effectively eradicate the virus from chronic hepatitis B patients1. These patients have a high risk to develop liver cirrhosis and hepatocellular carcinoma2. Studies on the HBV life cycle have been hampered by the lack of an efficient and user-friendly in vitro infection system. Primary human hepatocytes (PHHs) and HepaRG cells had served as valuable tools for studying the early event of viral entry, albeit the viral receptor remained elusive3,4,5. One major concern of primary human hepatocytes is its expensive cost from the commercial source. In addition, it is not a robust system because the qualities of hepatocytes tend to vary from lot to lot. In contrast, the HepaRG cell system is relatively more reliable and consistent. However, the infection efficiency is not high, and it involves tedious work to grow and maintain well-differentiated HepaRG cells5. Recently, sodium taurocholate cotransporting polypeptide (NTCP) was identified as a functional receptor for HBV and HDV6. This NTCP-reconstituted HepG2 system has emerged as a powerful resource in the field of HBV research7,8,9.

One common way to achieve a higher efficiency in HBV infection is to include 4–5% of polyethylene glycol (PEG) during the incubation period of viral infection. For example, in the presence of PEG, the efficiency of HBV infection on PHH was elevated up to 20 times, mainly due to the enhanced adsorption between virus and hepatocytes4. Similarly, PEG was able to promote HBV infection in HepaRG and NTCP-reconstituted HepG2 hepatocytes5,6. On the other hand, the use of PEG is not without any reservations. For example, PEG is known to induce membrane fusion, such as its use in the generation of hybridoma10,11. Therefore, PEG might provoke non-specific fusion between the virions and the host cell membrane. Most importantly, PEG is a non-biological chemical not found in human body. It remains a concern whether the current PEG-containing infection protocol could faithfully mimic the viral entry event in vivo.

HBV infection is supposed to be initiated by HBV binding to the heparan sulfate proteoglycans (HSPGs) on the hepatocyte surface12. Soluble heparins, which share a similar structure with HSPGs, could therefore inhibit HBV entry by interrupting the interaction between HBV and HSPGs on target cells12. As a highly sulfated glucosaminoglycan, heparin is mainly secreted by basophils and mast cells13. The normal physiological concentration of heparin in human plasma ranges from 1 to 5 μg/ml14,15,16. The physiological roles of heparin and HSPGs are highly diverse, including anticoagulation, signaling, development, anti-inflammation and anti-metastatic17,18. To date, more than 400 heparin-binding proteins have been reported in literature19.