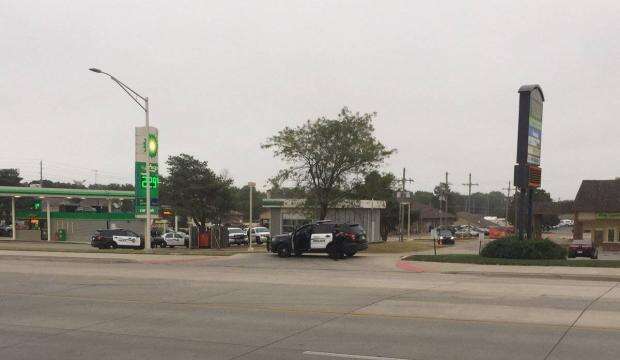 An armed standoff involving a man who had what appeared to be a gun had just come to a peaceful conclusion Wednesday morning in southwest Topeka when the man surrendered to officers, and police Capt. Mike Cross acknowledged he breathed a sigh of relief when it did.

Cross — and all of the other approximate two dozen officers on the scene — knew things could have turned out much differently.

On occasion, Cross said, people will commit what is known as “suicide by cop,” where they will take actions that leave officers no options but to fire their weapons at them.

Fortunately for everyone involved, that didn’t happen on Wednesday, Cross said.

“This is the way we want every law enforcement encounter to go,” Cross said. “It’s absolutely a relief. He is agreeing to go get help.”

Cross said the man was known to Topeka police officers and had a history of mental illness. The man, whose name wasn’t immediately available, was taken into custody around 10 a.m. Wednesday after he surrendered with his hands up, bringing a potentially volatile situation to an end.

It was later learned that the weapon the man was displaying was a “replica” handgun, Cross said.

The man had drawn attention to himself around 8:20 a.m. Wednesday as he sat on a brick ledge outside a business in the Foxcross shopping center, a strip mall on the east side of the 2900 block of S.W. Wanamaker Road.

People who worked at businesses in the strip mall called Shawnee County dispatchers, saying the man was pointing what appeared to be a gun at his head, occasionally waving it in the air.

Cross said people who reported the man’s behavior said they never felt threatened by him, and that the man appeared to be posing a danger only to himself.

Still, a man who was prominently displaying a gun while seated in a high-traffic,…