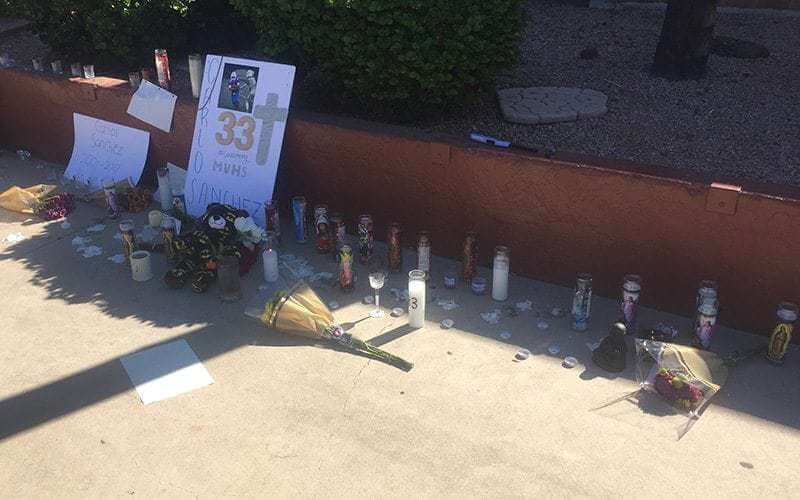 Candles and flowers were placed in front of Moon Valley High School to remember Carlos Sanchez. The football played passed away after suffering an injury in a game against Glendale Cactus. (Photo by Brittany Bowyer/Cronkite News)

PHOENIX — A cloud loomed over Moon Valley High School Monday as students and staff mourned the loss of one of their own. Carlos Sanchez was a junior at the school and a player on the varsity football team. During Friday’s game, he collapsed on the field after a play that resulted in his head hitting the ground hard.

“Carlos Sanchez, not because of his death, but because of how he lived, has made each and every person on our team a better person,” coach Seth Millican said to media Monday morning.

Moon Valley’s campus could be described as a sea of blue Monday as students decided to wear the color in Sanchez’s honor. The students encouraged other schools that were participating by wearing blue to share pictures of their support on Twitter.

“Our school community is saddened by the news of Carlos’ passing. We extend our deepest condolences to Carlos’ family and friends during this difficult time,” the Glendale Union High School District said in a statement.

David Hines, the executive director at the Arizona Interscholastic Association, said the school followed all of the protocols set forth by the AIA and executed the emergency plan they had drawn up.

“They had their athletic trainer, a doctor on site. They immediately went out and took the measures that are prescribed to handle a head injury (and) 911 was called immediately, so they had emergency vehicles,” he said. “They brought the ambulance right onto the field and transported the individual really quickly, which is critical in any type of medical condition.”

Hines said Sanchez’s death was not a result of head-to-head contact.