MicroRNA regulation of CYP 1A2, CYP3A4 and CYP2E1 expression in acetaminophen toxicity 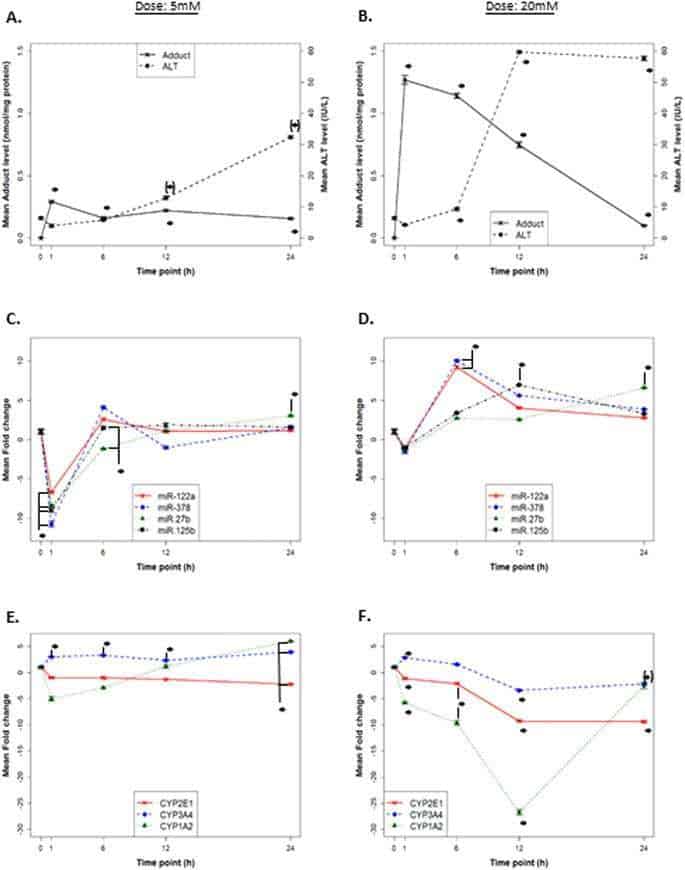 MicroRNAs (miRNAs) that regulate the cytochrome P-450 isoforms involved in acetaminophen (APAP) toxicity were examined in HepaRG cells treated with APAP (20 mM). In-vitro studies found that APAP protein adducts were increased at 1 h, followed by ALT increases at 12 and 24 h. CYP1A2, CYP3A4 and CYP2E1 mRNA levels were decreased, while miRNAs were increased for miR-122-5p, miR-378a-5p, miR-27b-3p at 6 h and miR-125b-5p at 12 h and miR-27b-3p at 24 h. Putative miRNA binding sites on the 3′UTRs of the CYPs were identified in-silico. Overexpression of miR-122-5p and miR-378a-5p in cells suppressed protein expression of CYP1A2, CYP3A4 and CYP2E1. Luciferase reporter assays confirmed the interaction between miR-122 and the 3′UTR of the CYP1A2 and CYP3A4. Thus, the in-vitro experiments showed that miR-122-5p and miR-378a-5p upregulation were associated with translational repression of CYPs. Serum samples of children with APAP overdose had significant elevation of miR-122-5p, miR-378a-5p, miR-125b-5p and miR-27b-3p, compared to healthy controls and receiver operator curves of the miRNAs had AUCs of 91 to 100%. Collectively, the data suggest that miRNA elevations in APAP toxicity represent a regulatory response to modify CYP1A2, CYP3A4 and CYP2E1 translation due to cellular stress and injury.

MicroRNAs (miRNAs, miRs) are 18-25-nucleotides short non-coding RNAs which regulate gene expression1,2,3 through mRNA degradation or the inhibition of protein translation4,5. Previous reports have described a role for microRNAs (miRNAs) in the regulation of drug metabolizing enzymes (DMEs)6,7,8. Characterizing miRNA profiles in relationship to cytochrome P450 (CYP) expression for DMEs relevant to APAP toxicity is important to further understanding mechanisms of toxicity and may have relevance for understanding individual variability in susceptibility to drug toxicity, as metabolism is an early, initiating event in the development of APAP hepatotoxicity. A number of laboratories using murine models of APAP toxicity have reported the upregulation of liver enriched miR-122 in association with hepatotoxicity9,10,11,12 and several researchers have reported elevation of miR-122 in clinical samples of subjects with acetaminophen toxicity13,14,15,16,17,18. Despite this literature, the relationship of miRNAs to DMEs relevant to APAP toxicity (i.e., CYP1A2, CYP3A4 and CYP2E1)19,20,21,22,23 is not well understood. In the present study, the relationship of CYP-regulating miRNAs to CYP1A2, CYP3A4 and CYP2E1 gene expression in APAP exposed HepaRG cells was evaluated and compared to indicators of APAP toxicity and metabolism24,25. HepaRG cells have high expression and activity levels for DMEs26,27,28 and have been previously used in studies of APAP toxicity29,