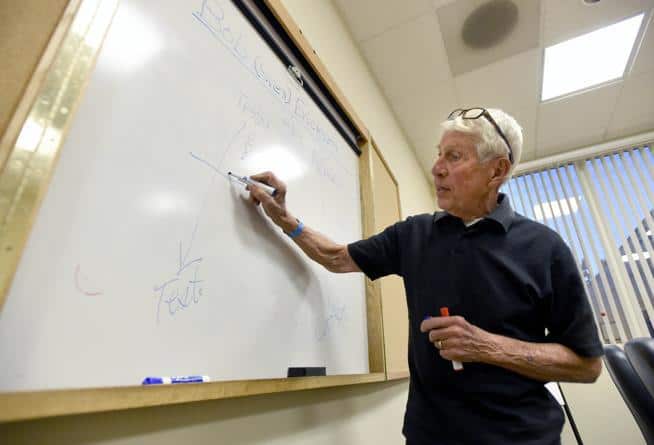 Meetings are held 6:30 to 8 p.m. the third Thursday of every month in Longmont United Hospital’s Gauguin Room. For more information, contact Bob Erickson at 303-651-0732 or at [email protected]

Of Nordic descent, an avid walker and swimmer, a sculptor and poet, and equipped with a sense of humor, Bob Erickson believes his odds of beating prostate cancer are pretty high.

But if not, he said he has come to terms with dying since his diagnosis of Stage 3 or 4 cancer in the fall of 2015.

“I said, how lucky can you be?” Erickson said, recalling a conversation he had with his two daughters and wife over his will and medical wishes in March.

“I’m 81, but it was 80 years before I had any significant illness or accident. If I die tomorrow, I have no complaints. That’s amazing. So each day I get now, that’s just great. It’s a plus.”

As the facilitator of a prostate cancer support group at Longmont United Hospital, Erickson is spending the days he has left spreading the word about the meetings held the third Thursday of every month since February. The eighth meeting held last week fell during Prostate Cancer Awareness Month.

He said the group is primarily centered on education of the cancer itself and the different types of treatments as well as sharing experiences about doctors and medicines. He said it’s less about emotions, but of course, those well up too.

Sometimes there’s only two other men in the room with Erickson. He said he wants the group to grow to be as large as Boulder County Prostate Support Group in Louisville, with attendance often in the 20s, where both men and women are welcome.

“The wives, girlfriends, mothers, they need to hear this too,” Erickson said. “In some ways, it’s almost harder for the caretaker, the loved one, than it is for the person because you often feel so helpless in what you can do.”

“I think patients benefit tremendously from support groups, knowing they’re not alone, having the educational piece of it and also the emotional support from other men in their shoes,” she…