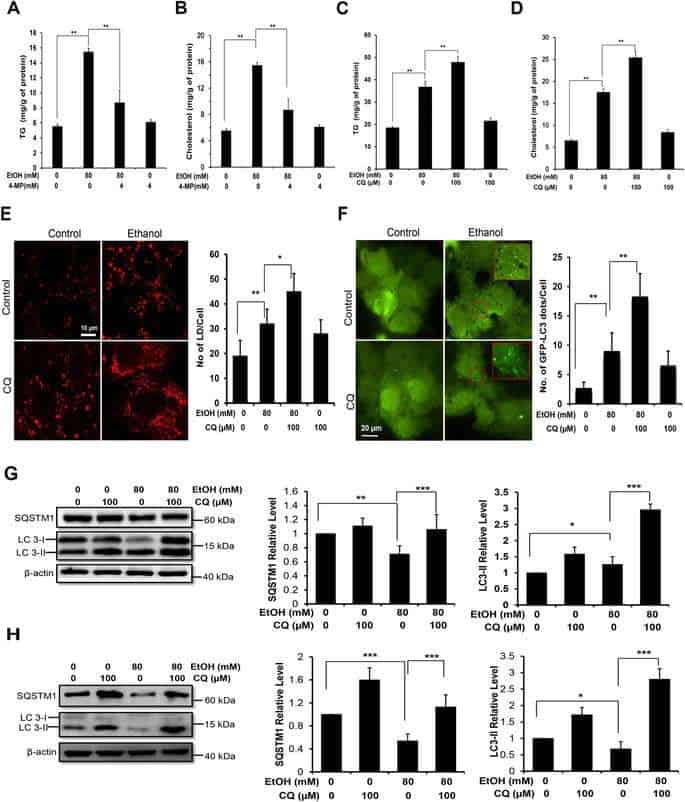 Ethanol-induced hepatic lipophagy plays an important cytoprotective role against liver injury, but its mechanism is not fully determined. In the present study, ethanol-induced lipophagy was studied in an immortalized mouse hepatocyte line, AML12. We found that ethanol treatment elevated lipid content in these cells, which could be regulated by autophagy. To determine the potential mechanism, we investigated the role of a key adaptor molecule SQSTM1/p62. SQSTM1 can bind to LC3 on autophagosomes and ubiquitinated molecules on cargos, thus facilitating the autophagic engulfment of the cargo. We found that both LC3 and SQSTM1 could colocalize with lipid droplets (LDs) following ethanol treatment. Colocalization of LC3 with LDs was significantly inhibited by SQSTM1 knockdown, which also reduced ethanol-induced lipid elevation. In addition, increased ubiquitin signals were found to colocalize with SQSTM1 on LDs in response to ethanol. Moreover, the SQSTM1 signal was colocalized with that of perilipin1, a major protein on LDs. Finally, perilipin1 knockdown significantly altered ethanol-induced lipophagy. Taken together, these data support a model in which autophagosomes were directed to the LDs via SQSTM1, which bound to ubiquitinated proteins, possibly including perilipin 1, on LDs. This study provides a potential mechanistic explanation to how ethanol induces lipophagy in hepatocytes.

Alcoholic liver disease (ALD) is caused by chronic alcohol abuse and is a serious health concern worldwide. It is generally considered that the pathogenesis of ALD is intimately related to oxidative stress, derived from reactive intermediates including acetaldehyde, increased NADH/NAD+ ratio and reactive oxygen species (ROS) generation1,2,3,4. ALD is also characterized by an excessive accumulation of fatty acids. Free fatty acids can be detrimental to hepatocytes. An increased level of fatty acids and ROS can result in lipid peroxidation and increased production of inflammatory cytokines, contributing to liver injury and progression to fibrosis5,6,7,8,9,10.

In response to ethanol stimulation, cellular protection mechanisms including autophagy can be activated5,6. Autophagy is an evolutionarily conserved cellular degradation process with important pathophysiological significance7. Autophagy is particularly important for liver physiology and its disturbance has been well documented in liver diseases8,9,10. Deletion of key autophagy genes in the liver results in significant injury11,12,13,14. Autophagy can protect against liver injury by several mechanisms, among which is the ability of autophagy to eliminate intracellular lipids. Ethanol promotes lipid accumulation in lipid droplets (LDs). They may be considered less harmful than free fatty acids15. On one hand, de-esterification can occur, which would increase the cellular level of harmful free fatty acids. On the other hand, removal of lipid droplet may favor the equilibrium toward the esterification. Autophagy can reduce the level of LDs by lysosomal degradation. This process, known as lipophagy16, is still far from a complete understanding. Nevertheless, lipophagy occurs following ethanol stimulation. Colocalization of LC3 with lipid droplet can be demonstrated in vivo and in vitro5,6,17. Hepatic triglycerides (TG) level in alcoholic fatty liver disease models was reduced by activating autophagy, and was elevated when autophagy was inhibited5,6.

AML12 cells are responsive to ethanol because they retain the essential enzymes for ethanol metabolism18. The lipid content in AML12 cells as measured by the levels of TG and cholesterol was elevated in 24 hours after ethanol treatment (Fig. 1A and B). This elevation could be inhibited by 4-Methylpyrazole hydrochloride (4-MP), an inhibitor of alcohol dehydrogenase (Fig. 1A and B), indicating that the effect required the metabolism of ethanol5,18,19.

To determine whether ethanol-induced lipid accumulation in AML12 cells was affected by autophagy, we co-treated cells with chloroquine (CQ), which inhibits lysosome degradation. Indeed, CQ co-treatment further elevated the levels of TG and cholesterol stimulated by ethanol (Fig. 1C and D), suggesting that a part of lipids were normally removed from the cells through the lysosome-mediated degradation. We further confirmed the observation by examining the level of lipid droplets, which is the main form of the lipids in the ethanol-treated cells (Fig. 1E). To directly assess the activation of autophagy, we expressed in AML12 cells the autophagy marker LC3 conjugated to green fluorescence protein (GFP) and found that GFP-LC3 formed puncta upon ethanol treatment, indicating the formation of autophagosomes (Fig. 1F). Consistently, the autophagosome-bound form of LC3, known as LC3-II, was elevated, while the cytosol form of LC3, known as LC3-I, was reduced following ethanol treatment for 12 hours (Fig. 1G) or 24 hours (Fig. 1H). The level of SQSTM1/p62, an adaptor for autophagic targets, was reduced in ethanol-treated cells as the result of increased autophagic degradation (Fig. 1G and H). The enhanced autophagy flux was further confirmed by the co-treatment of CQ, which resulted in the highest elevation of GFP-LC3 puncta (Fig. 1F) or LC3-II (Fig. 1G and H), indicating the progression of autophagy through the lysosome-mediated degradation.

We then determined whether directly altering the autophagy machinery could affect the level of lipids in ethanol-treated AML12 cells. The Beclin 1-Atg14 directed Class III PI-3 kinase complex plays a critical role in autophagy activation20,21. By inhibiting the PI-3 kinase with 3-methyladenine (3-MA) (Fig. 2A and B, Supplementary Fig. 1SA) or wortmannin (Supplementary Fig. 1SB–D), we found that ethanol-induced lipid accumulation was further elevated along with the suppression of LC3-II formation and SQSTM1 degradation. To more specifically assess the regulation of lipid content by autophagy under ethanol stimulation, we selectively knocked down a key autophagy gene, ATG5, in AML12 cells, which caused suppression of autophagy as indicated by the elevation of SQSTM1 and reduction of LC3-II (Fig. 2C). As in the case of co-treatment with CQ or PI-3 kinase inhibitors, knockdown of ATG5 led to a further accumulation of TG and cholesterol in ethanol-treated cells (Fig. 2D and E). Conversely, promotion of autophagy with known autophagy inducers, rapamycin (Supplementary Fig. 2SA) or carbamazepine (Supplementary Fig. 2SB), reduced the lipid content in ethanol-treated AML12 cells (Fig. 2F–I). Collectively, these data indicated that autophagy regulated the lipid content in AML12 cells following ethanol treatment.

Autophagosomes and p62 were colocalized with lipid droplet, which is required for efficient lipophagy

The ability of autophagy to regulate lipid content in ethanol-treated AML12 cells suggested that this system was a valid model for studying autophagy-mediated lipid degradation, i.e., lipophagy with a pathophysiological significance. To understand how autophagosomes may remove lipids, we first examined whether autophagosomes can be found in the LDs. As shown in Fig. 1E, the level of LDs was regulated by autophagy. We thus examined whether autophagosomes could be found in LDs in response to ethanol treatment. Using anti-LC3 immunostaining and a Bodipy dye together with confocal microscopy, we found that the endogenous LC3 was colocalized with LDs (Fig. 3A). LC3 signals were found at the edge of LDs, and there could be more than one LC3 puncta on a single LD. The percentage of LDs with colocalized LC3 puncta was increased from about 10% to about 25% in response to ethanol treatment, which could be further elevated to above 30% in the presence of CQ, when the autophagic degradation was blocked.

To investigate how autophagosomes were recruited to the LDs, we examined whether SQSTM1, the autophagy adaptor whose level was changed during ethanol treatment and autophagy modulation (see above), could be also found on the LDs. Anti-SQSTM1 staining together with staining for LDs revealed that SQSTM1 was found on LDs in a way stimulated by ethanol and modulated by CQ, just like LC3 (Fig. 3B). Moreover, LC3, SQSTM1 and LD were colocalized together following ethanol treatment, and the signals of LC3 and SQSTM1 were merged together by confocal microscopy (Supplementary Fig. 3S), suggesting that autophagosomes could be recruited to the LDs via SQSTM1, which serves as the bridge between the autophagosome via its interaction with LC3 and also via its interaction with LDs. This model of SQSTM1-mediated selective removal of a particular target by autophagy has been shown in numerous other cases22,23.

To test this model in the present case, we knocked down SQSTM1 in AML12 cells, which resulted in an elevation of LC3 in the basal level and in the ethanol treatment condition (Fig. 4A), indicating the inhibition of autophagy flux. Knockdown of SQSTM1 did not seem to enhance cell death compared to the control transfected with scrambled siRNA. Cells were then treated with ethanol in the presence or absence of CQ, and the colocalization of LC3 and SQSTM1 to LDs was assessed by confocal microscopy. We found that the SQSTM1 was significantly reduced by immunostaining in cells transfected with the SQSTM1-specific siRNA (Fig. 4B), much like what was shown by immunoblotting assay (Fig. 4A). Therefore there were few LDs that had colocalized SQSTM1 signals. Most importantly, the percentage of LDs with colocalized LC3 puncta was significantly reduced in ethanol-treated cells (Fig. 4C). The inclusion of CQ in this assay prevented the degradation of LDs and allowed the analysis on a larger amount of LDs. This result indicated that SQSTM1 played an important role in recruiting LC3/autophagosomes to the LDs. Consistently with this interpretation, we found that the levels of TG and cholesterol were also higher in SQSTM1-knockdown AML12 cells than the control cells following ethanol treatment (Fig. 4D and E), indicating the functional importance of SQSTM1 in autophagic removal of lipids in ethanol treatment.

While binding to LC3 on the autophagosome, SQSTM1 also binds to ubiquitinated cargo, thus facilitating the engulfment of the cargo by the autophagosome22,23. We speculated that increased ubiquitination of proteins on LDs could provide anchoring sites for SQSTM1. We examined this hypothesis by anti-ubiquitin immunostaining and found that ubiquitin signals were increased on LDs following ethanol treatment (Fig.