Progressive and Prognosis Value of Notch Receptors and Ligands in Hepatocellular Carcinoma: A Systematic Review and Meta-analysis 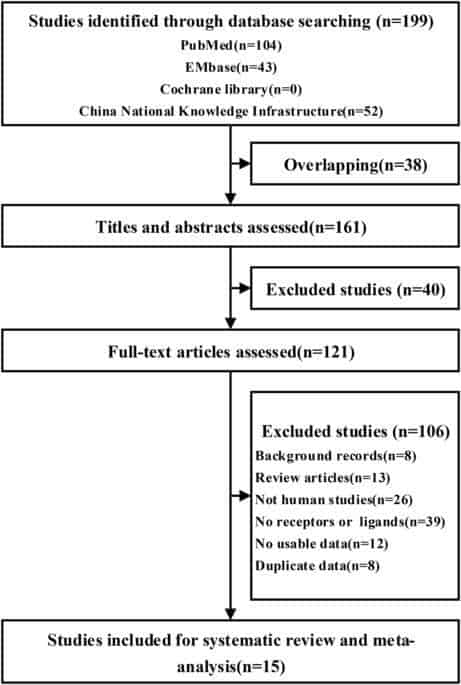 Hepatocellular carcinoma (HCC) is not sensitive to radiotherapy and chemotherapy and experiences postoperative relapse extremely easy, which is the major cause of the high mortality rate. The Notch signaling pathway is expected to become a new target for the biological treatment of HCC. We searched databases for studies that evaluated the expression of Notch receptors and/or ligands in human HCC tissue. The search yielded 15 studies that enrolled 1643 patients. Compared with non-HCC tissues, Notch 1 was associated with a higher expression level (odds risk 1.59, 95% confidence interval 0.34 to 7.45), as well as Notch 3 (2.63, 0.69 to 10.02), Notch 4 (1.33, 0.74 to 2.38) and Jagged 1 (1.47, 0.23 to 9.53); however, Notch 2 showed the opposite result (0.60, 0.30 to 1.20). Larger tumor size (>5 cm), metastasis positive, and micro vascular invasion positive were features that were associated with over-expression in Notch 1 according to the clinicopathological features. The expression levels of Notch 1, 3, 4 and Jagged 1 were associated with higher expression in HCC tissues, while Notch 2 had the opposite result. This study is registered with PROSPERO (CRD42017055782).

The incidence of liver cancer has been increasing in recent years. Over the past 30 years, liver cancer (mostly hepatocellular carcinoma, HCC) has mainly been prevalent in Africa and Asia. HCC is now a common disease globally and is responsible for 54% of the total number of cancer patients worldwide, with more than 600,000 related deaths estimated each year1,2. HCC is the fifth most common malignancy and second leading cause of cancer-related death worldwide; its 5-year survival rate is 15–17%3. In developing countries, HCC is the second leading cause of male cancer death, second only to lung cancer, while it ranks sixth in more developed countries4. In Asian and African countries, the incidence of liver cancer is associated with hepatitis B viral infection, while in Western developed countries, heavy drinking of alcohol is the main cause of liver cancer. Different inducement and influencing factors may determine the occurrence, evolution and prognosis of HCC5,6.

Because HCC is characterized by hidden onset, rapid development and a high degree of malignancy, early clinical diagnosis of HCC is difficult. While many patients with symptomatic treatment often have terminal cancer, most have intrahepatic metastasis…