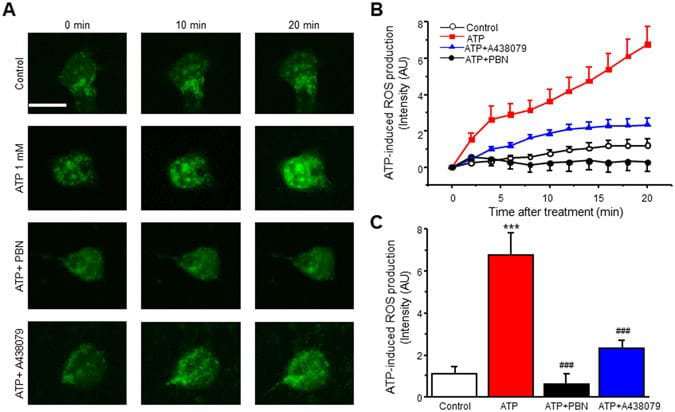 ATP can activate a variety of pathways through P2 purinoreceptors, leading to neuroprotection and pathology in the CNS. Among all P2X receptors, the P2X7 receptor (P2X7R) is a well-defined therapeutic target for inflammatory and neuropathic pain. Activation of P2X7R can generate reactive oxygen species (ROS) in macrophages and microglia. However, the role of ROS in P2X7R–induced pain remains un explored. Here, we investigated the downstream effects of neuronal P2X7R activation in the spinal cord. We found that ATP induces ROS production in spinal cord dorsal horn neurons, an effect eliminated by ROS scavenger N-tert-butyl-α-phenylnitrone (PBN) and P2X7R antagonist A438079. A similar effect was observed with a P2X7R agonist, BzATP, and was attenuated by a NADPH oxidase inhibitor apocynin. Intrathecal administration of BzATP resulted in ROS production in the spinal cord and oxidative DNA damage in dorsal horn neurons. BzATP also induced robust biphasic spontaneous nociceptive behavior. Pre-treatment with A438079 abolished all BzATP-induced nociceptive behaviors, while ROS scavengers dose-dependently attenuated the secondary response. Here, we provide evidence that neuronal P2X7R activation leads to ROS production and subsequent nociceptive pain in mice. Together, the data indicate that P2X7R-induced ROS play a critical role in the P2X7R signaling pathway of the CNS.

Adenosine triphosphate (ATP) is a ubiquitously abundant signaling molecule that can activate a vast variety of pathways, allowing downstream effects that can lead to both neuroprotection and pathology in the central nervous system (CNS). Non-neuronal cells and neurons release ATP in order to communicate with each other and other types of cells in the CNS by activating P2 purinoreceptors1, 2. These receptors are sub classified as ionotropic P2XRs and metabotropic P2YRs, and are broadly distributed in neurons and glial cells2. While activation of P2YRs is mainly coupled to phospholipase C (PLC), activation of the ionotropic P2XRs cause the opening of cation permeable channels, initiating intracellular Ca2+ mobilization and further downstream signaling3, 4. Among all P2X receptors, the P2X7 receptor (P2X7R) is a well-defined therapeutic target for inflammatory diseases5, and has been found in the central and peripheral nervous systems6,7,8. Specifically, P2X7R is known to be involved in cell proliferation, apoptosis, modulation of neurotransmitter release, and microglial and astrocyte activation in the nervous system9, 10. Activation of P2X7R with a selective agonist, 2′(3′)-O-(4-Benzoylbenzoyl) adenosine-5′-triphosphate tri (triethylammonium) salt (BzATP), can also increase the production of proinflammatory cytokines from both macrophages and microglia11. Despite controversy in the field over the role of neuronal P2X7R, recent findings report functional expression of P2X7Rs in neurons12,13,14,15. Moreover, activation of P2X7R in neurons can lead to cell death14, 15.

Reactive oxygen species (ROS) production can occur as a natural byproduct of cellular metabolism, and plays a role both in intracellular and extracellular signaling. Physiologically, generation of ROS occurs in subcellular compartments such as the mitochondria, the endoplasmic reticulum (ER), peroxisomes, and on the plasma membrane through NAPDH oxidases and lipoxygenases16. Under pathological conditions, cells can accumulate high amounts of ROS, which react with proteins, lipids, carbohydrates, and nucleic acids causing irreversible changes that subsequently lead to cellular damage17. An excessive and/or sustained increase in ROS production has been implicated in the pathogenesis of many diseases including atherosclerosis, rheumatoid arthritis, and diseases in the CNS such as Parkinson’s disease, Alzheimer’s disease and chronic persistent pain18. Early studies reported that many forms of ROS can mediate inflammatory pain and contribute to pain behaviors associated with inflammation and neuropathic injury19,20,21. Moreover, recent studies have demonstrated that ROS play an important role in both neuropathic pain and inflammatory pain in rats, specifically through interactions with NMDA receptors22, 23. Despite growing knowledge of ROS in pain, however, little is known regarding the role of ROS in acute nociception.

Recent studies have shown that P2X7R activation can generate ROS in macrophages and microglia following stimulation with ATP or BzATP, an effect that can be blocked by P2X7R inhibitors such as oxidized ATP (oATP) and Brilliant Blue G (BBG)24,25,26. P2X7R activation in microglia can also lead to generation of ROS, an increase in proinflammatory cytokines, and subsequent brain injury27. In addition, NADPH oxidase (NOX) plays a significant role in P2X7R-induced ROS production in macrophages and microglia28, 29. Thus, generation of ROS following P2X7R activation is well established in other cell types. ATP is one of the major mediators of pain signaling in the spinal cord30, and P2X7R can modulate behavioral responses to pain31. Interestingly, in mice lacking P2X7R, inflammatory pain and neuropathic pain are completely abolished32. Moreover, P2X7R has proven to be an important therapeutic target in inflammatory pain and neuropathic pain5, 33. However, the mechanisms by which P2X7R contributes to pain remain poorly understood, and the role of ROS in P2X7R–induced pain has yet to be explored. In the current study, we sought to determine the consequence of P2X7R activation in dorsal horn neurons. Here, we provide evidence that neuronal P2X7R activation leads to ROS production and subsequent nociceptive pain in mice.

Previous studies have shown P2X7R activation can induce ROS production in microglia. To determine whether ROS increases following P2X7R activation in cultured spinal cord dorsal horn (SCDH) neurons, cells were loaded with CellROX Green, a fluorescent ROS indicator, and subjected to live cell confocal microscopy. Early reports show that P2X7R activation in astrocytes can lead to glutamate release34, 35. In order to eliminate glutamate release that may subsequently activate neuronal ROS increases in our cultures, cells were loaded with D-AP5 (30 µM) and CNQX (10 µM), NMDA and AMPA receptor antagonists respectively, 10 min prior to imaging. Following drug administration, images were taken at 2 min intervals for 20 minutes. ATP (1 mM), which activates the P2 purinoreceptor family, increased ROS in a time-dependent manner (Fig. 1A,B). To confirm CellROX intensity increased due to ROS production, cells were pre-treated with the ROS scavenger N-tert-butyl-α-phenylnitrone (PBN, 30 µM) for 30 min. Co-treatment of ATP and PBN showed a complete inhibition of ROS production (Fig. 1B,C). To determine whether ROS increases were occurring due to P2X7R activation, neurons were pre-treated for 10 min with a competitive P2X7R antagonist, A438079, then co-treated with ATP. Interestingly, inhibition with A438079 (10 µM) partially attenuated ROS production in SCDH neurons (Fig. 1B,C).

To further confirm P2X7R activation increases ROS in SCDH neurons, we employed a P2X7R agonist, 2′(3′)-O-(4-Benzoylbenzoyl)adenosine-5′-triphosphate tri(triethylammonium) salt (BzATP). BzATP induced a robust increase in a dose- and time-dependent manner, reaching maximal ROS levels around 12 min (Fig. 2A,B). About 79% of neurons showed ROS increase to BzATP (300 µM) treatment after 20 min (33 of 42 neurons). The effect was abolished by pre-treatment with ROS scavenger PBN (Fig. 2B,C). When we pre-treated neurons with A438079 (A43) and co-treated with BzATP (300 µM), ROS production was completely blocked (Fig. 2B,C). Together, our results suggest that P2X7R activation induces ROS production in SCDH neurons.

To determine whether ROS scavenger PBN reduced ROS production by affecting the function of P2X7R, we performed calcium imaging experiments. SCDH neurons were loaded with the Ca2+ dye Fura-2AM in HBSS. Under the microscope, neurons were clearly distinguishable from glia. They appeared bright, and had small, smooth somata and visible processes. 60 mM KCl, which produces a fast and transient Ca2+ response in neurons, was also used to further determine neurons in our culture. First, we confirmed P2X7R activation by BzATP in neurons. About 75% of neurons responded positively to BzATP treatment (27 of 36 neurons). Pre-treatment with P2X7R antagonist, A438079 (10 µM), completely blocked intracellular Ca2+ responses caused by BzATP (300 µM) (Fig. 4A). Neurons were then washed with 2 mM Ca2+ Tyrode’s solution for 10 minutes and stimulated with BzATP once more. Following the wash, BzATP induced significant intracellular Ca2+ increases (Fig. 4A). The data indicate BzATP activates P2X7R in SCDH neurons.

Next, we pre-treated neurons with PBN (30 µM) in 2 mM Ca2+ Tyrode’s solution for 30 minutes prior to calcium imaging. Pre-treatment and co-treatment with PBN did not affect P2X7R activation by BzATP (Fig. 4B). Thus, PBN reduces ROS increases through its scavenging properties.

To determine whether P2X7R activation could also induce ROS production in vivo, the superoxide indicator dihydroethidium (DHE, 1 µM) was used, and intensity was measured in the dorsal horn of the L4-L5 spinal segment of mice. Mice were administered with a single intrathecal injection of BzATP (30 nmol). After 10 min (according to peak ROS levels in cultured dorsal horn neurons), the spinal cord was removed, frozen, sectioned, and stained using DHE, then viewed under a confocal microscope. Mice intrathecally injected with saline showed basal levels of ROS in the SCDH, while intrathecal administration of BzATP showed a robust increase in ROS production (Fig. 5). Additionally, mice pre-treated with PBN (100 mg/kg, i.p.) for 30 min prior to the intrathecal injection of BzATP showed a complete reduction in DHE intensity levels in the dorsal horn. Pre-treatment with A438079 (100 mg/kg, i.p.) for 30 min prior to the injection also completely reduced DHE levels in the dorsal horn, thus suggesting ROS increases induced by BzATP occur through P2X7R. These results indicate that P2X7R activation increases ROS production in the SCDH of mice.

Aberrant ROS can react with DNA to form various oxidized bases and nucleotides. One of the most prevalent oxidized bases in DNA is 8-oxo-2′-deoxyguanosine (8-oxo-dG), which causes a faulty pairing with adenosine on the opposite template by many DNA polymerases, and ultimately leads to cellular damage and, in higher amounts, cell death38, 39. Consequently, 8-oxo-dG is used as a constituent marker for oxidative DNA damage40, 41. To confirm whether P2X7R activation can increase ROS in neurons, mice were given intrathecal BzATP as described above. Animals were perfused, and the L4-L5 area of the spinal cords were removed, cryoprotected in sucrose, sliced then incubated with primary antibodies against 8-oxo-dG and NeuN, a marker for neurons. Very little 8-oxo-dG was detected in the SCDH of PBS controls. However, slices from mice…