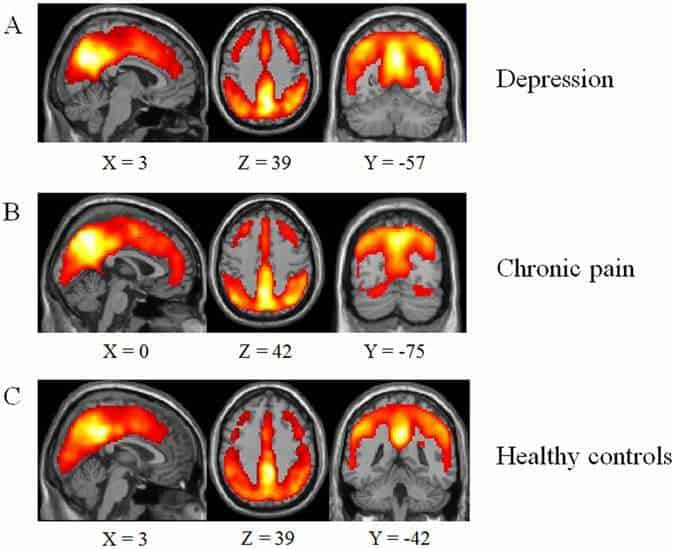 Complex relationships between depression and chronic pain have been reported in previous studies. However, only a few neuroimaging studies have investigated similarities and differences in neural systems underlying them. We examined the brain functions in the resting state of 43 patients with depression, 41 patients with chronic pain (somatoform pain disorder) and 41 healthy controls, by using regional homogeneity (ReHo) and functional connectivity analysis. Depressive symptoms were assessed by using the Beck Depression Inventory-Second Edition (BDI-II). ReHo values for the dorsolateral prefrontal cortex (DLPFC) significantly decreased for chronic pain patients, and functional connectivity between the DLPFC and thalamus decreased only for these patients. These findings are indicative of distinct brain functions related to depression and chronic pain. Understanding these differences would further elucidate the pathophysiology of these conditions.

Recent evidence indicates that resting-state functional magnetic resonance imaging (R-fMRI) might be useful for investigating human cognitions, behaviors, emotions and somatic sensations26, 27. It is known that regional homogeneity (ReHo) has been shown to be sufficient to measure the local temporal synchronization of the time series of nearest neighbors during the resting state28, 29, and the functional connectivity method can manifest longer inter-regional changes19, 28. Previous ReHo or functional connectivity studies have suggested that these techniques were useful for increasing our understanding of neuropathology related to mental disorders or chronic pain27, 30,31,32. Furthermore, coordinating the ReHo method in the seed-based functional connectivity analysis may facilitate the sensitivity of each analysis and reduce the uncertainty of seed extraction33, and more sensitive analyses could contribute to further elucidation of the complex neurocircuitry underlying depression and chronic pain.

Detailed demographic and clinical characteristics of participants are presented in Table 1. There were no significant differences in age, or gender among the groups (p = 0.46 for age and p = 0.38 for gender). A one-way ANOVA revealed a significant main effect of BDI-II scores, F (2, 122) = 113.8, p < 0.001, with BDI-II scores of depressive patients being significantly higher than those of chronic pain patients and the controls (Bonferroni p < 0.001). Moreover, BDI-II scores of chronic pain patients were significantly higher than those of the controls (Bonferroni p < 0.001).

Regional brain functions of each group are shown in Fig. 1. It can be seen that regions such as the medial temporal lobe, posterior cingulate cortex, postcentral gyrus and precuneus exhibited significantly higher ReHo values during the resting state.

To examine differences in resting-state regional brain functions among depressive, chronic pain and control groups, we performed an ANCOVA with group as a categorical factor, BDI-II scores as a continuous factor, BDI-II scores * group as the interaction term and age and gender as covariates of no interest, because it is important to assess the implication of depressive state for each group. Significant BDI-II score * group interactions were observed for the DLPFC (Fig. 2A and Table 2: FWE corrected p < 0.05).