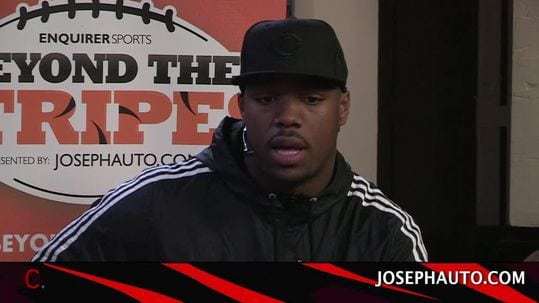 The Walkthru is a daily look at the Bengals, your questions and whatever else spills from the brains of beat writers Paul Dehner Jr. and Jim Owczarski. You can follow them on Twitter (@pauldehnerjr, @JimOwczarski), Instagram (@enqbengals) as well as Enquirer Sports on Facebook for behind the scenes and breaking news.

But first, let’s try to put some stuff to bed here on a topic that Bengals fans just can’t seem to wrap their heads around: the team isn’t looking to trade Jeremy Hill.

(For your reference, we did this with AJ McCarron and Colin Kaepernick, too.)

On Sunday, I tried to address this in a roundabout way and talked to a former GM about what makes in-season trades difficult to pull off. I then asked Scot McCloughan about a hypothetical deal for Hill directly in the piece:

“OK, great, we trade him for a fifth. Now we’re down to two and you sign off the practice squad. What happens if Joe (Mixon) gets hurt? Now you’re like son of a gun, the season’s over, but we got a fifth next year. Great. What’s that do for us? It’s a huge numbers thing.”

While many fans seem to believe Hill is no better than Jarveon Williams or a street free agent, the front office and the coaching staff don’t believe that.

While many fans seem to think if Mixon and Bernard get hurt and “it’s all over,” the front office and the coaching staff don’t believe that.

And, it’s their opinions that count here. The club feels they are in the playoff race. They are not going to part with an experienced player they feel has value to their current team.

Will they listen if someone calls them? Sure. They always do. Duke Tobin said as much at the NFL Scouting Combine. But with the trade deadline less than three weeks away and the Bengals potentially playing for first place in 10 days, they’re not moving on from the 2014 second-round pick.

These receiver questions are all related so let’s tackle it here.

Cody Core is on the active 46-man roster for his special teams ability, first and foremost. He then is the one to spell A.J. Green for a snap or two, and occasionally Brandon LaFell. While the Bengals like to say all of their receivers learn all of the positions in the offense, with Alex Erickson as a natural slot receiver he makes sense to fill in for Boyd for as long as the 2016 second-round pick is out. Erickson already got one start in that spot this year, Week 2 against Houston.

As for Core’s season in 2016 – remember, he did that with Green out for the year due to injury. Then the team re-signed LaFell as a free agent. While the team likes Core’s development as a receiver, he is still a work in progress and won’t immediately jump into action with the injury to Boyd.

The receiving corps, a strong suit to start the year, has clearly been decimated as the team hits the bye weekend. It’ll be up to Bill Lazor to figure out if Core has earned more of a role.

I want to say yes because Kansas City has looked great, but all of this Pittsburgh dysfunction and a big game for Andy Reid means the Steelers likely go into Arrowhead and…