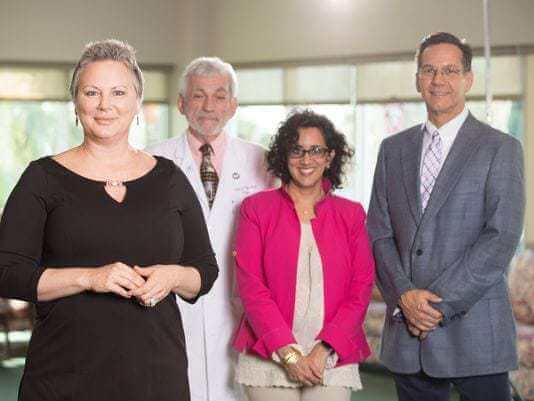 One year ago, Diana Pratt was diagnosed with inflammatory breast carcinoma (IBC), the rarest and most aggressive form of breast cancer. IBC is hard to detect through a mammogram as it typically doesn’t present with a lump or mass. As a result, it easily spreads without being detected.

Needless to say, Pratt was stopped dead in her tracks by the diagnosis. But at the same time, she said, “I knew I had to do whatever it takes to get through this.”

Early on, Pratt heard about a special IBC clinic at MD Anderson in Houston, Texas. While she didn’t want to leave her husband and two sons, she began raising money through a GoFundMe account to help pay for her transportation and stay in Houston.

While she consulted with specialists at MD Anderson, Pratt gathered a team of local physicians including: medical oncologist, Alpana Desai, MD; Martin Health Physician Group radiation oncologist, Michael Burke, MD; and breast surgeon, James Vopal, MD. At the same time, she armed herself with all of the information on IBC she could find.

Pratt was pleasantly surprised that her medical team in Stuart was willing to integrate MD Anderson’s protocols into her care and treatment.

“These doctors were superb,” Pratt said. “They allowed me to stay close to home and helped me fight my cancer with…