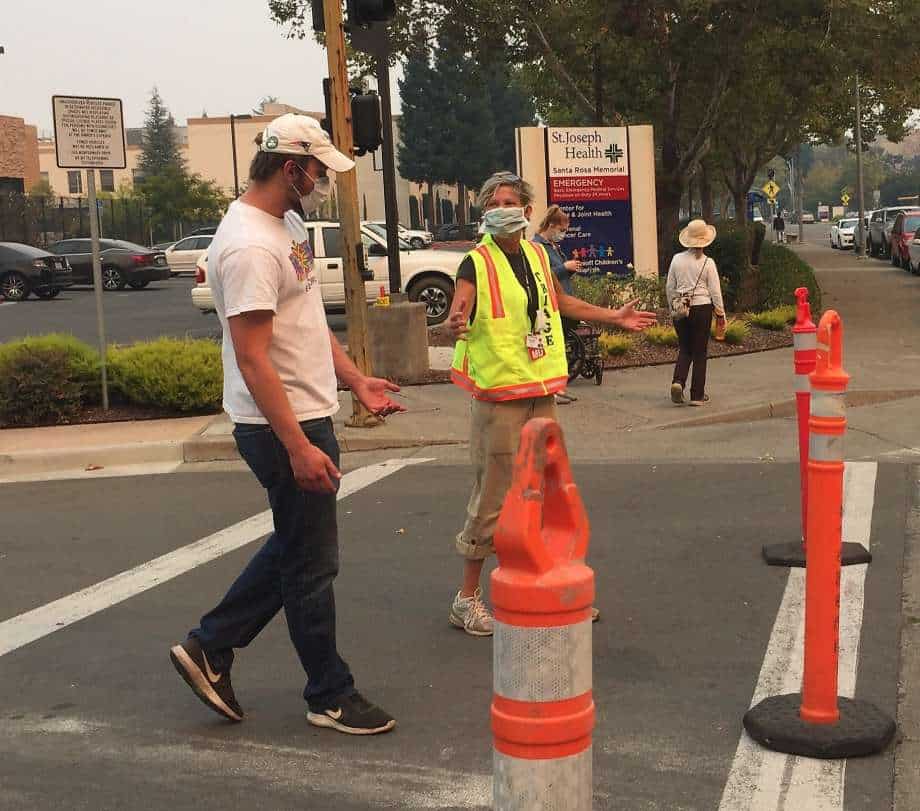 As a flurry of ash began to fall from the sky outside Santa Rosa Memorial hospital Monday afternoon, Elizabeth and Joseph Tito took comfort in controlling what they could: the flow of ambulances, cars and panicked families in and out of the hospital’s main parking lot.

The Tito family had evacuated their new home in Fountaingrove, an upscale community north of downtown Santa Rosa, about 3 a.m. Monday after seeing flames licking the tops of nearby hills. They had just moved to the area in August — an attempt to escape East Coast blizzards and “bad weather,” Elizabeth Tito said.

“I guess we traded the blizzards for fire,” she said.

Fires raged across Northern California as firefighters battled back…

Elizabeth and Joseph Tito, who work as surgeons at St. Joseph Health’s outpatient facility and Healdsburg District Hospital, respectively, said they were happy for the distraction of directing traffic.

It kept them from spending too much time wondering whether their home was still standing.

Santa Rosa Memorial was the northernmost hospital to remain open in the midst of the North Bay fires Monday.

Officials said the hospital opened its command center about 1 a.m. and has since seen a steady stream of people in need of care.

About 60 people arrived at Santa Rosa Memorial throughout Monday morning, including two burn patients in critical condition, 15 people with moderate injuries and 43 with minor injuries, Colleen Flynn, a spokeswoman for the St. Joseph Health group said.

Santa Rosa Memorial, Queen of the Valley Medical Center in Napa and Petaluma Valley Hospital remained open as of about 3 p.m. None of the medical centers had suffered any structural damage, officials said.

Santa Rosa Memorial also accepted evacuees from our neighboring hospitals — including six transfers from Kaiser Santa Rosa, which was evacuated and shut down, and six from Sutter Medical Center.

Among the patients transferred from Sutter were several mothers with newborns as well as expectant mothers in active labor.