H3: Title of the paragraph – No capital letters

H3: Title of the paragraph – No capital letters

Pulmonary embolism occurs when a blood clot forms a blockage in an artery in the lungs. Most cases of pulmonary embolism are caused by blood clots that originate in the legs or other deep veins in the body (deep vein thrombosis, or DVT).

Around 900,000 DVT events occur in the United States each year. Pulmonary embolism leads to an estimated 200,000 U.S. deaths annually. It is the third most common cause of hospital-related death—and the most common preventable cause of hospital death. Because pulmonary embolism is almost always connected with deep vein thrombosis, doctors refer to the two conditions together as venous thromboembolism. 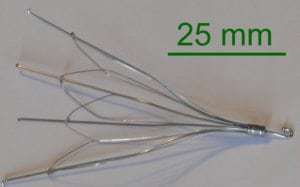 Certain patients are at high risk for developing blood clots. In most cases, these patients are given anticoagulant drugs to reduce the chance of blood clots. Some patients, however, are not good candidates for anticoagulants due to adverse reactions such as bleeding complications or because of drug ineffectiveness. For them, an IVC filter may be used instead of blood-thinning medication.