Cancer prevention is action taken to lower the chance of getting cancer. By preventing cancer, the number of new cases of cancer in a group or population is lowered. Hopefully, this will lower the number of deaths caused by cancer. To prevent new cancers from starting, scientists look at risk factors and protective…

Cancer prevention is action taken to lower the chance of getting cancer. By preventing cancer, the number of new cases of cancer in a group or population is lowered. Hopefully, this will lower the number of deaths caused by cancer.

Different ways to prevent cancer are being studied.

Esophageal cancer is a disease in which malignant (cancer) cells form in the tissues of the esophagus.

The esophagus is the hollow, muscular tube that moves food and liquid from the throat to the stomach. The wall of the esophagus is made up of several layers of tissue, including mucous membrane (inner lining), muscle, and connective tissue. Esophageal cancer starts in the inner lining of the esophagus and spreads outward through the other layers as it grows. 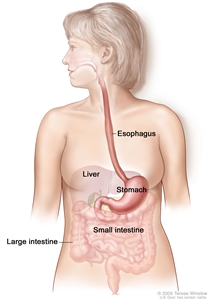 The esophagus and stomach are part of the upper gastrointestinal (digestive) system.

The two most common types of esophageal cancer are named for the type of cells that become malignant (cancerous):

Men are about three times more likely than women to develop esophageal cancer. The chance of developing esophageal cancer increases with age. Squamous cell carcinoma of the esophagus is more common in blacks than in whites.

Avoiding cancer risk factors may help prevent certain cancers. Risk factors include smoking, being overweight, and not getting enough exercise. Increasing protective factors such as quitting smoking and exercising may also help prevent some cancers. Talk to your doctor or other health care professional about how you might lower your risk of cancer.

The following risk factors increase the risk of squamous cell carcinoma of the esophagus:

Smoking and alcohol use

Studies have shown that the risk of squamous cell carcinoma of the esophagus is increased in people who smoke or drink a lot.

The following protective factors may decrease the risk of squamous cell carcinoma of the esophagus:

Avoiding tobacco and alcohol use

Studies have shown that the risk of squamous cell carcinoma of the esophagus is lower in people who do not use tobacco and alcohol.

Chemoprevention is the use of drugs, vitamins, or other agents to try to reduce the risk of cancer. Nonsteroidal anti-inflammatory drugs (NSAIDs) include aspirin and other drugs that reduce swelling and pain.

The following risk factors increase the risk of adenocarcinoma of the esophagus:

The following protective factors may decrease the risk of adenocarcinoma of the esophagus.

Chemoprevention is the use of drugs, vitamins, or other agents to try to reduce the risk of cancer. Nonsteroidal anti-inflammatory drugs (NSAIDs) include aspirin and other drugs that reduce swelling and pain.

Radiofrequency ablation of the esophagus

The purpose of some cancer prevention clinical trials is to find out whether actions people take can prevent cancer. These may include eating fruits and vegetables, exercising, quitting smoking, or taking certain medicines, vitamins, minerals, or food supplements.

New ways to prevent esophageal cancer are being studied in clinical trials.

Physician Data Query (PDQ) is the National Cancer Institute’s (NCI’s) comprehensive cancer information database. The PDQ database contains summaries of the latest published information on cancer prevention, detection, genetics, treatment, supportive care, and complementary and alternative medicine. Most summaries come in two versions. The health professional versions have detailed information written in technical language. The patient versions are written in easy-to-understand, nontechnical language. Both versions have cancer information that is accurate and up to date and most versions are also available in Spanish.

PDQ is a service of the NCI. The NCI is part of the National Institutes of Health (NIH). NIH is the federal government’s center of biomedical research. The PDQ summaries are based on an independent review of the medical literature. They are not policy statements of the NCI or the NIH.

This PDQ cancer information summary has current information about esophageal cancer prevention. It is meant to inform and help patients, families, and caregivers. It does not give formal guidelines or recommendations for making decisions about health care.

Editorial Boards write the PDQ cancer information summaries and keep them up to date. These Boards are made up of experts in cancer treatment and other specialties related to cancer. The summaries are reviewed regularly and changes are made when there is new information. The date on each summary (“Updated”) is the date of the most recent change.

The information in this patient summary was taken from the health professional version, which is reviewed regularly and updated as needed, by the PDQ Screening and Prevention Editorial Board.

PDQ is a registered trademark. The content of PDQ documents can be used freely as text. It cannot be identified as an NCI PDQ cancer information summary unless the whole summary is shown and it is updated regularly. However, a user would be allowed to write a sentence such as “NCI’s PDQ cancer information summary about breast cancer prevention states the risks in the following way: [include excerpt from the summary].”

The best way to cite this PDQ summary is:

Images in this summary are used with permission of the author(s), artist, and/or publisher for use in the PDQ summaries only. If you want to use an image from a PDQ summary and you are not using the whole summary, you must get permission from the owner. It cannot be given by the National Cancer Institute. Information about using the images in this summary, along with many other images related to cancer can be found in Visuals Online. Visuals Online is a collection of more than 3,000 scientific images.

The information in these summaries should not be used to make decisions about insurance reimbursement. More information on insurance coverage is available on Cancer.gov on the Managing Cancer Care page.

More information about contacting us or receiving help with the Cancer.gov website can be found on our Contact Us for Help page. Questions can also be submitted to Cancer.gov through the website’s E-mail Us.

If you want to know more about cancer and how it is treated, or if you wish to know about clinical trials for your type of cancer, you can call the NCI’s Cancer Information Service at 1-800-422-6237, toll free. A trained information specialist can talk with you and answer your questions.