Cannabis, also known as marijuana, is a plant grown in many parts of the world. It makes a resin (thick substance) that contains compounds called cannabinoids (see Question 1). By federal law, possessing Cannabis is illegal in the United States outside of approved research settings. However, a growing number of states…

Questions and Answers About Cannabis

Cannabis, also known as marijuana, is a plant first grown in Central Asia that is now grown in many parts of the world. The Cannabis plant makes a resin (thick substance) that contains compounds called cannabinoids. Some cannabinoids are psychoactive (affecting your mind or mood). In the United States, Cannabis is a controlled substance and has been classified as a Schedule I agent (a drug with a high potential for abuse and no accepted medical use).

Clinical trials that study Cannabis for cancer treatment are limited.

By federal law, possessing Cannabis (marijuana) is illegal in the United States unless it is used in approved research settings. However, a growing number of states, territories, and the District of Columbia have passed laws to legalize medical marijuana. (See Question 3).

Cannabinoids may help treat the side effects of cancer and cancer treatment.

If Cannabis is illegal, how do some cancer patients in the United States use it?

Although federal law prohibits the use of Cannabis, the map below shows the states and territories that have legalized Cannabis for medical purposes. Some other states have legalized only one ingredient in Cannabis, such as cannabidiol (CBD), and these states are not included in the map. Medical marijuana laws vary from state to state. 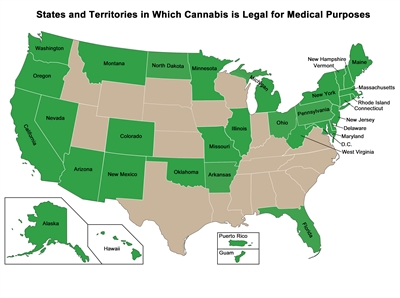 A map showing the U.S. states and territories that have approved the medical use of Cannabis.

How is Cannabis given or taken?

Cannabis may be taken by mouth (in baked products or as an herbal tea) or may be inhaled. When taken by mouth, the main psychoactive ingredient in Cannabis (delta-9-THC) is processed by the liver and changed into a different psychoactive chemical (11-OH-THC).

When Cannabis is smoked and inhaled, cannabinoids quickly enter the bloodstream. The psychoactive chemical (11-OH-THC) is made in smaller amounts than when taken by mouth.

A growing number of clinical trials are studying a medicine made from an extract of Cannabis that contains specific amounts of cannabinoids. This medicine is sprayed under the tongue.

Have any laboratory or animal studies been done using Cannabis or cannabinoids?

In laboratory studies, tumor cells are used to test a substance to find out if it is likely to have any anticancer effects. In animal studies, tests are done to see if a drug, procedure, or treatment is safe and effective in animals. Laboratory and animal studies are done before a substance is tested in people.

Have any studies of Cannabis or cannabinoids been done in people?

No ongoing studies of Cannabis as a treatment for cancer in people have been found in the CAM on PubMed database maintained by the National Institutes of Health.

Small studies have been done, but the results have not been reported or suggest a need for larger studies.

Cannabis and cannabinoids have been studied as ways to manage side effects of cancer and cancer therapies.

Cannabis and cannabinoids have been studied in the treatment of nausea and vomiting caused by cancer or cancer treatment:

Newer drugs given for nausea caused by chemotherapy have not been directly compared with Cannabis or cannabinoids in cancer patients.

The ability of cannabinoids to increase appetite has been studied:

Cannabis and cannabinoids have been studied in the treatment of pain:

Cannabis and cannabinoids have been studied in the treatment of anxiety.

Have any side effects or risks been reported from Cannabis and cannabinoids?

Side effects of cannabinoids can include:

These symptoms are mild compared with symptoms of withdrawal from opiates and usually go away after a few days.

Studies on risks from Cannabis use

Studies on the risk of various cancers linked to Cannabis smoking have shown the following:

Larger studies that follow patients over time are needed to find if there is a link between Cannabis use and a higher risk of testicular germ cell tumors.

Are Cannabis or cannabinoids approved by the U.S. Food and Drug Administration for use as a cancer treatment or treatment for cancer-related symptoms or side effects of cancer therapy?

The U.S. Food and Drug Administration (FDA) has not approved Cannabis or cannabinoids for use as a cancer treatment.

Cannabis is not approved by the FDA for the treatment of any cancer-related symptom or side effect of cancer therapy.

Two cannabinoids (dronabinol and nabilone) are approved by the FDA for the treatment of nausea and vomiting caused by chemotherapy in patients who have not responded to antiemetic therapy.

Use our clinical trial search to find NCI-supported cancer clinical trials that are accepting patients. You can search for trials based on the type of cancer, the age of the patient, and where the trials are being done. General information about clinical trials is also available.

Physician Data Query (PDQ) is the National Cancer Institute's (NCI's) comprehensive cancer information database. The PDQ database contains summaries of the latest published information on cancer prevention, detection, genetics, treatment, supportive care, and complementary and alternative medicine. Most summaries come in two versions. The health professional versions have detailed information written in technical language. The patient versions are written in easy-to-understand, nontechnical language. Both versions have cancer information that is accurate and up to date and most versions are also available in Spanish.

PDQ is a service of the NCI. The NCI is part of the National Institutes of Health (NIH). NIH is the federal government's center of biomedical research. The PDQ summaries are based on an independent review of the medical literature. They are not policy statements of the NCI or the NIH.

This PDQ cancer information summary has current information about the use of Cannabis and cannabinoids in the treatment of people with cancer. It is meant to inform and help patients, families, and caregivers. It does not give formal guidelines or recommendations for making decisions about health care.

Editorial Boards write the PDQ cancer information summaries and keep them up to date. These Boards are made up of experts in cancer treatment and other specialties related to cancer. The summaries are reviewed regularly and changes are made when there is new information. The date on each summary ("Updated") is the date of the most recent change.

The information in this patient summary was taken from the health professional version, which is reviewed regularly and updated as needed, by the PDQ Integrative, Alternative, and Complementary Therapies Editorial Board.

PDQ is a registered trademark. The content of PDQ documents can be used freely as text. It cannot be identified as an NCI PDQ cancer information summary unless the whole summary is shown and it is updated regularly. However, a user would be allowed to write a sentence such as "NCI's PDQ cancer information summary about breast cancer prevention states the risks in the following way: [include excerpt from the summary]."

The best way to cite this PDQ summary is:

Images in this summary are used with permission of the author(s), artist, and/or publisher for use in the PDQ summaries only. If you want to use an image from a PDQ summary and you are not using the whole summary, you must get permission from the owner. It cannot be given by the National Cancer Institute. Information about using the images in this summary, along with many other images related to cancer can be found in Visuals Online. Visuals Online is a collection of more than 3,000 scientific images.

The information in these summaries should not be used to make decisions about insurance reimbursement. More information on insurance coverage is available on Cancer.gov on the Managing Cancer Care page.

More information about contacting us or receiving help with the Cancer.gov website can be found on our Contact Us for Help page. Questions can also be submitted to Cancer.gov through the website's E-mail Us.

Conventional approaches to cancer treatment have generally been studied for safety and effectiveness through a scientific process that includes clinical trials with large numbers of patients. Less is known about the safety and effectiveness of complementary and alternative methods. Few CAM therapies have been tested using demanding scientific methods. A small number of CAM therapies that were thought to be purely alternative approaches are now being used in cancer treatment—not as cures, but as complementary therapies that may help patients feel better and recover faster. One example is acupuncture. According to a panel of experts at a National Institutes of Health (NIH) meeting in November 1997, acupuncture has been found to help control nausea and vomiting caused by chemotherapy and pain related to surgery. However, some approaches, such as the use of laetrile, have been studied and found not to work and to possibly cause harm.

The NCI Best Case Series Program which was started in 1991, is one way CAM approaches that are being used in practice are being studied. The program is overseen by the NCI's Office of Cancer Complementary and Alternative Medicine (OCCAM). Health care professionals who offer alternative cancer therapies submit their patients' medical records and related materials to OCCAM. OCCAM carefully reviews these materials to see if any seem worth further research.

Questions to Ask Your Health Care Provider About CAM

When considering complementary and alternative therapies, patients should ask their health care provider the following questions:

To Learn More About CAM

The National Center for Complementary and Integrative Health (NCCIH) at the National Institutes of Health (NIH) facilitates research and evaluation of complementary and alternative practices, and provides information about a variety of approaches to health professionals and the public.

NCCIH and the NIH National Library of Medicine (NLM) jointly developed CAM on PubMed, a free and easy-to-use search tool for finding CAM-related journal citations. As a subset of the NLM's PubMed bibliographic database, CAM on PubMed features more than 230,000 references and abstracts for CAM-related articles from scientific journals. This database also provides links to the websites of over 1,800 journals, allowing users to view full-text articles. (A subscription or other fee may be required to access full-text articles.)

The NCI Office of Cancer Complementary and Alternative Medicine (OCCAM) coordinates the activities of the NCI in the area of complementary and alternative medicine (CAM). OCCAM supports CAM cancer research and provides information about cancer-related CAM to health providers and the general public via the NCI website.

The Food and Drug Administration (FDA) regulates drugs and medical devices to ensure that they are safe and effective.

If you want to know more about cancer and how it is treated, or if you wish to know about clinical trials for your type of cancer, you can call the NCI's Cancer Information Service at 1-800-422-6237, toll free. A trained information specialist can talk with you and answer your questions.